Located at 525 Great Northern Way, Equinox and Monte Clark galleries will be gone at some point in the next few years, though no one — the artists, the studio owners or even the province — knows exactly when.
Feb 13, 2019 12:03 PM By: John Kurucz

An old building constructed in the 1960s is the lone vestige of the area’s industrial past. Next to it is a 21st century, multi-million dollar building that houses tomorrow’s tech trendsetters and artists.

Less than 100 feet away from that urban dichotomy hangs four photos, placed there specifically because they have nowhere else to go in a city that’s losing art space at a frenetic pace. 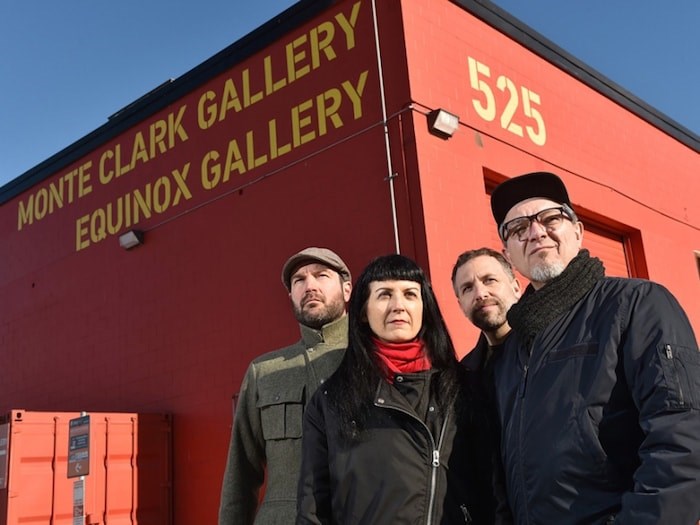 Artists Byron Dauncey, Sally Buck, John Goldsmith and Kent Lins and have placed four photos near 525 Great Northern Way as a way to show their work and protest the eventual demolition of two nearby gallery spaces. Photo by Dan Toulgoet.

Located at 525 Great Northern Way, Equinox and Monte Clark galleries will be gone at some point in the next few years, though no one — the artists, the studio owners or even the province — knows exactly when.

With land prices and rents going up and art spaces going down, the four artists are losing space to show their work or see what their contemporaries are up to.

“We are displaying art, first and foremost,” Buck told the Courier by phone. “I think it’s important to remind people of the significance of art in our society. It is a form of the newspaper or the nightly news for many people.”

There’s no definite theme linking up the four images, though each displays some degree of commodification, environmental damage and urban decay. Only Dauncey has had his work shown in either gallery. 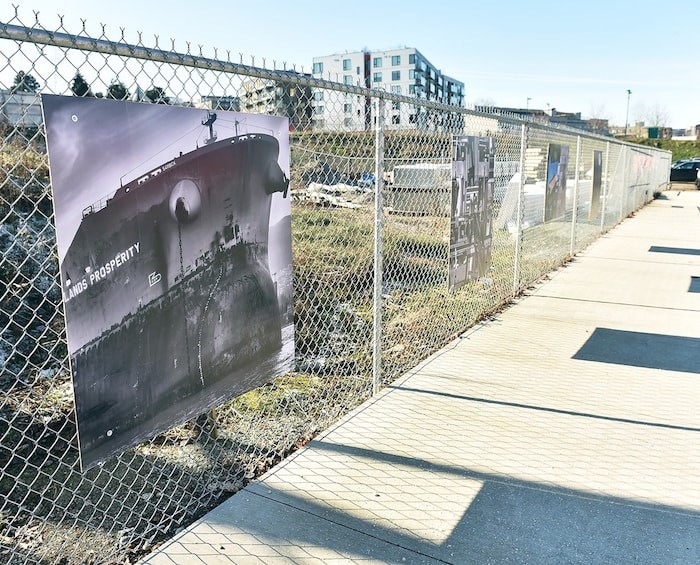 These four photographs by Vancouver artists are hung outside two galleries on Great Northern Way that will be torn down to make way for the Broadway SkyTrain extension. Photo by Dan Toulgoet

“As developers and city hall decide a fate that we must all abide by, we, as citizens, also want a say in how our land gets used,” Goldsmith told the Courier. “This is especially poignant here as development encroaches on established art land.”

News broke late last year that the land on which both galleries sit will be razed to make way for the Broadway SkyTrain extension. The galleries take up about 15,000 feet of space, with Equinox accounting for the majority of that footprint.

Gallery owner Andy Sylvester said he met with the previous council and high-ranking TransLink officials last year to state his case for the SkyTrain track to be laid further to the east, which would have preserved the building.

“There was no elasticity in any of the conversations,” Sylvester told the Courier. “And frankly, there wasn’t a desire to think about change. The desire was to placate the development that’s happening along the transit line.”

The ministry of transportation and infrastructure issued a statement to the Courier Tuesday afternoon, suggesting the planning process for the area goes back more than a decade, long before the galleries arrived in the area.

“Unfortunately, there is not a feasible alternative alignment for the future subway at this location because of the adjacent active rail right-of-way and the new Emily Carr University building to the south,” a ministry spokesperson said.

This diagram shows the area to be affected by the Broadway SkyTrain extension. – City of Vancouver

Equinox’s history in Vancouver goes back nearly five decades, with previous locations on Robson and South Granville streets. Hundreds of artists have shown their works in the galleries, including Douglas Coupland, Gordon Smith and Jack Shadbolt. One local artist has had recurring shows at Equinox since the late 1970s.

“These are like the Margaret Atwoods, the Chris Hadfields or the Wayne Gretzkys of the art world,” Buck said.

The False Creek Flats became the gallery's home about seven years ago and Equinox took up residence in a building that once served as a paint and mechanical shop for the tractor company Finning.

The galleries sit within an 18-acre parcel of land that was essentially gifted to the arts and academia sectors in the early 2000s when Finning helped establish the Great Northern Way Trust alongside UBC, BCIT, SFU and Emily Carr University.

The intent was to create an academic tech hub for the 21st century learners and beyond.

“I don’t think what Finning wanted was for this to be a real estate development,” Sylvester said. “As a society and as a city, you don’t get a site like this to do over. You get it once and if you lose it, it’s done.”

Responding to Vancouver’s ever-changing arts climate is almost old hat for Buck and Lins. Lacking affordable art space for displays last year, they took their show around town in the back of a van.

“We used to have an amazing arts community in this city. Somehow or other it’s been snatched from us and it’s time we snatched it back,” Lins said.

For its part, the province says it’s working to find another spot in Vancouver for Sylvester’s gallery. He’s been doing the same and expects at least another couple years at his current location before shovels hit the ground.

But that’s not the point, according to Sylvester. He’s looking at land in North Vancouver and points east. He wants to stay where he is and build upon an interface that mixes Vancouver’s past, present and future.

“I like the idea of continuing what was here before and I especially like the idea that art and culture repositions itself within that conversation,” Sylvester said. “When you arrive at a transit stop that’s outside of a university and a centre for digital media, it can’t just be grey. It can’t be another coffee shop or a condo development for God’s sake.”