This 8-year-old B.C. girl and her mom are slaying art and pop culture look-alike pics (PHOTOS)

They started with a rework of Johannes Vermeer’s Girl with a Pearl Earring, then turned to pop culture icons
May 12, 2020 3:41 PM By: Roxanne Egan-Elliott 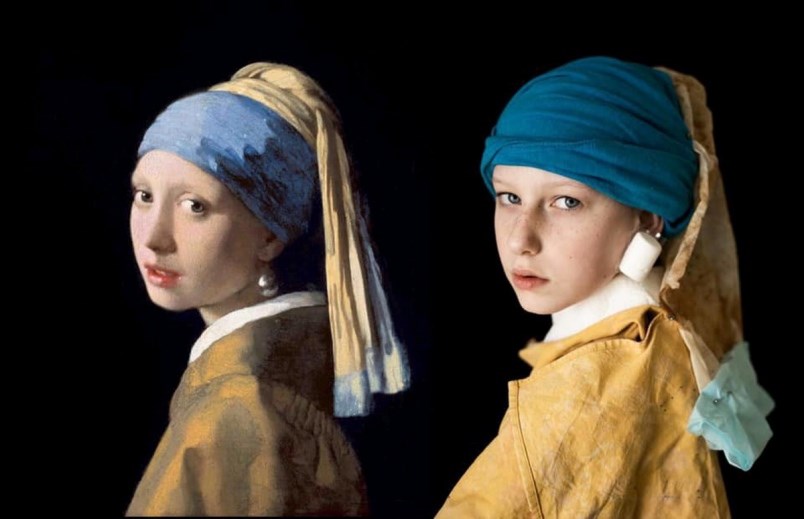 Parchment paper becomes a scarf, napkins serve as the cloak and a marshmallow is as an earring for Dylan Roddam in a recreation of Johannes Vermeer's Girl with a Pearl Earring. Photo by Ali Roddam/Bella Photo

In a pinch — or a pandemic — a marshmallow can play the part of a pearl.

That’s what a Comox Valley family discovered when they took on a challenge issued by the J. Paul Getty Museum in California to recreate famous artworks using materials found at home.

“We say we use junk from around the house, and that’s literally it,” said mom Ali Roddam, a professional photographer in Black Creek.

They started with a rework of Johannes Vermeer’s Girl with a Pearl Earring. Using only items they could find in the house, Roddam dressed up her eight-year-old, Dylan Roddam, as the girl in the iconic painting.

They found tan napkins to recreate the subject’s top, and wrapped Dylan’s blue T-shirt around her head to mimic the scarf. Thanks to Roddam’s pandemic-fuelled bread baking, they had used parchment paper on hand to complete the headscarf.

They didn’t have an exact lookalike for the pearl earring that gives the painting its name, but they did have a bag of marshmallows left over from a bonfire, so they capped off the look with an edible accessory taped to Dylan’s ear.

That was Dylan’s favourite part of the outfit. “The whole time she was so excited, because she was like: ‘Do I get to eat the marshmallow after?’ ” Roddam said.

Marshmallows sometimes do double-duty as incentive to help keep Dylan focused during the several hours it can take to put together an image.

For Roddam, one of the biggest challenges is getting the lighting just right. For Dylan, it’s holding still. To recreate an image of singer-songwriter Post Malone holding a beer bottle, she had to hold a bottle of soy sauce while her mom captured the shot.

“She’s a bit of a wiggle-worm, so trying to get the right angle can sometimes be difficult,” her mom added.

They decided to move into well-known pop-culture images to keep the project going. Roddam started sharing the photos to her business page on Facebook.

“The response was just overwhelming. People were going crazy, especially since it’s an eight-year-old and it’s hilarious when she’s dressed up as Bruce Willis,” Roddam said.

The recreation of a scene from Die Hard — in which a battered John McClane (Willis) is crawling through a vent with a lighter in hand — is one of Roddam’s favourites from the collection. It’s also one of the few she has touched up a little in Photoshop.

“I gave her a receding hairline, because it’s funny — she’s a little girl,” Roddam said.

Dylan crawled into a cardboard box covered in tin foil to recreate the vent and her older sister Mikayla — who helps with some of the more challenging props — stepped in to make a Zippo lighter out of erasers and tin foil.

Some of the images are so similar that people have struggled to tell them apart at first glance.

“The Kurt Cobain one was so dead-on that people literally said they scrolled by and didn’t understand why two pictures of Kurt Cobain were posted until they looked at it again. So that one, I feel like we nailed it,” Roddam said.

Making photos with her mom is keeping boredom at bay for Dylan while she’s out of classes.

“It’s normally the best part of my day,” she said.

She loves reading the online comments left on each photo, but her favourite part is just spending time with her mom.“I get to hang out with my mom because normally she’s working and stuff, so now we can really bond,” she said.

Here are a few of their photos: