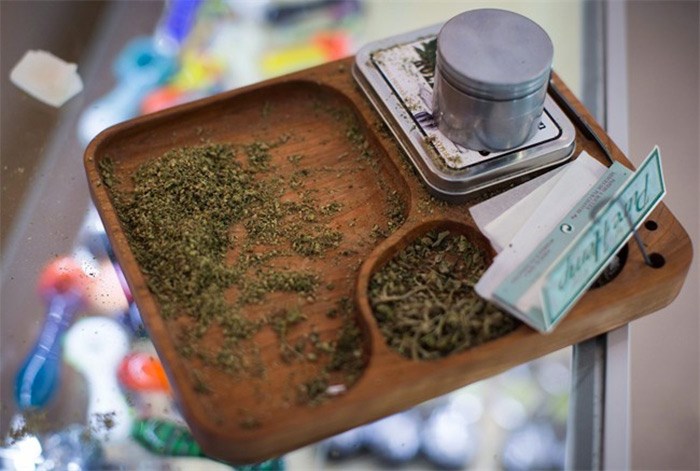 Marijuana and paraphernalia are seen at a Weeds Glass & Gifts medical marijuana dispensary, in Vancouver on Friday, May 1, 2015. Police departments and local governments are asking British Columbia for a cut of marijuana revenues as the province crafts regulations for legalized pot. THE CANADIAN PRESS/Darryl Dyck

VANCOUVER - Police departments and local governments are asking British Columbia for a cut of marijuana revenues as the province crafts regulations for legalized pot.

The provincial government asked for public input last month as it develops new rules. Submissions are posted online and will be accepted until Wednesday.

Feedback so far includes recommendations from Port Coquitlam and View Royal, on Vancouver Island, for pot profits to be directed to municipalities to address costs associated with enforcement.

The British Columbia Association of Municipal Chiefs of Police echoes that recommendation, saying in its submission that the "cost download" of enforcement needs to be considered when a revenue-sharing system is developed.

The association also wants the province to deal with drug-impaired driving the same way as drunk driving.

Police chiefs say the public must have "reasonable access to legal cannabis" or consumers will turn to the black market.

Several existing marijuana producers, retailers and interest groups have weighed in with ideas on how cannabis should be sold in B.C. Several want to be included in the rules.

Buddha Barn, a licensed cannabis retailer in Vancouver, says allowing existing marijuana retailers a way to participate in the recreational marijuana marketplace is "the only way to avoid chaos."

Marijuana-related businesses are also urging the province to tread carefully when it comes to strict rules around the advertising and branding of recreational pot.

"Movements to codify plain packaging must be avoided completely as they will hobble the ability of legal producers to properly compete against the illicit market," says Tilray, a licensed medicinal marijuana producer.

Some provinces have released details on how they plan to approach legalized recreational marijuana.

New Brunswick will sell pot through a subsidiary of its liquor commission, with knowledgeable staff available to guide customers.

The Nova Scotia government is seeking feedback on a legal age of 19, with sales through a Crown corporation such as the Nova Scotia Liquor Corp.

The federal government is expected to legalize recreational marijuana in July 2018, although some provinces, territories and police agencies have lobbied for a delay. Federal Health Minister Ginette Petitpas Taylor has said the government is sticking to its deadline.

The B.C. government is expected to release a report on public input in December.

Here are some of the submissions it has received so far:

— B.C. Real Estate Association: Concerned about properties used for drug production and is recommending a registration requirement for those with personal cultivation.

— Centre for Addictions Research of B.C.: Cannabis should be sold in government-controlled stores and include labels that show the percentage of THC, the active compound in marijuana. Ten per cent or more of the revenue collected from cannabis sales should be spent on health promotion, education, research and treatment.

— School District 42, covering Maple Ridge and Pitt Meadows: Anyone under 19 should be banned from possessing cannabis, even if simple possession of small amounts isn't considered a criminal offence. Wants "significant amount" of proceeds from the sale of cannabis directed toward additional enforcement and education.