We want to feature the biggest dogs in the Lower Mainland

This week the Richmond News featured the story below about a massive local pooch who goes by the name of Tyson. An Alaskan Malamute, this beast weighs in at a whopping 150 pounds and is "probably" the biggest dog in Richmond.
0
Jan 28, 2018 11:16 AM By: Bob Kronbauer

This week the Richmond News featured the story below about a massive local pooch who goes by the name of Tyson. An Alaskan Malamute, this beast weighs in at a whopping 150 pounds and is "probably" the biggest dog in Richmond.

It got us to thinking: with spaces getting smaller and smaller, what the biggest dog in Vancouver? Is there perhaps a Great Dane living in Coal Harbour that tips the scales? A hefty Rottweiler in Burnaby who weighs more than we do?

We want your help: Send us photos of your huge dog! Send this post to your friend who has a huge dog!

Your (huge) dog will be featured in our regular Dogtown Vancouver feature (sharing readers' dogs since 2008!), as well as a roundup of The Biggest Dogs in Vancouver. Heck, maybe we'll even do a meetup at a local dog park when this thing wraps.

Send 2 photos along with the following info to adam@vancouverisawesome.com:

- The neighbourhood your dog calls home

- Any other eccentric or excellent information about your dog 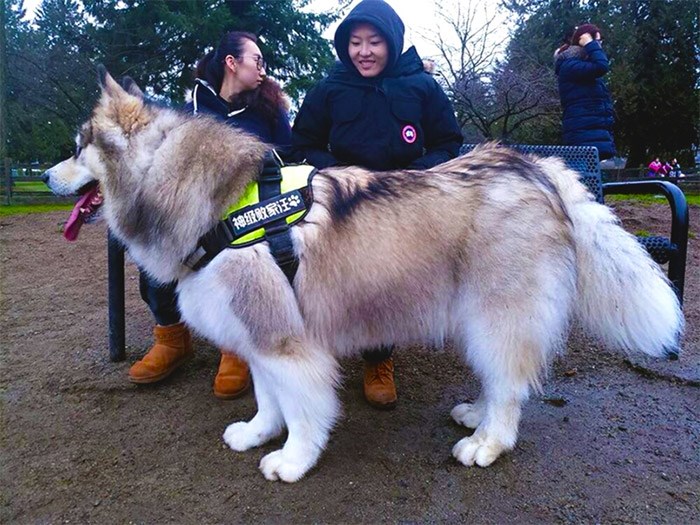 Tyson, an Alaskan Malamute, is probably the biggest dog in Richmond.

The giant three-year-old pooch weighs in at a whopping 150 pounds and a body length of 1.6 metres — not including his equally long tail.

Currently, this big guy is living in Richmond, and owned by Loki Cheung and Nyx Li together, who are both students here.

But despite his huge size, his temper is mild. In fact, he tends to be very submissive to other dogs and people. 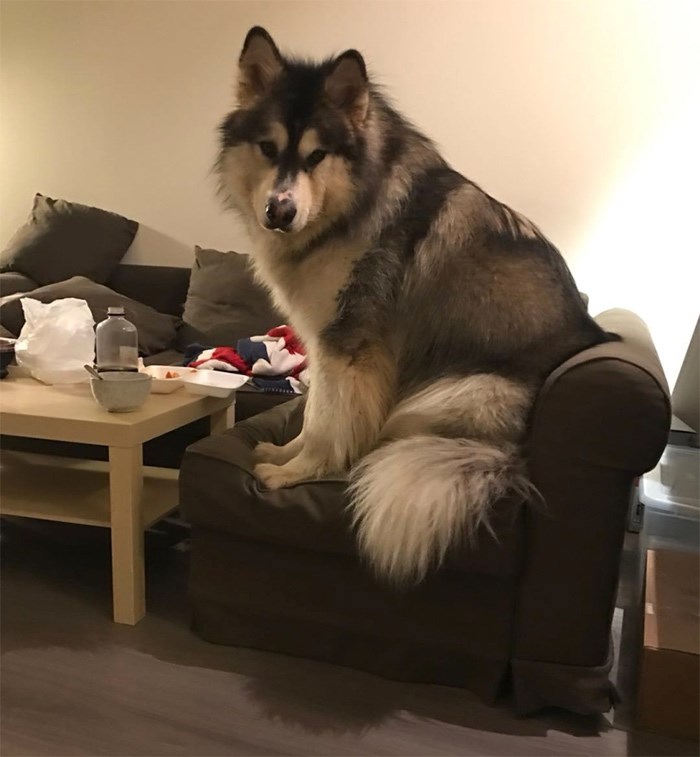 “When he first arrived, he was only 28 pounds, and we never thought he could grow this big,” said Loki Cheung. “We heard his dad weighed 150 pounds, but we had no idea what 150 pounds means for a dog.”

Tyson, who came directly from a breeder in Alaska, consumes more than three pounds of raw meat a day, plus an extra bowl of dog food and treats.

“Before, he was only eating dog food, but regular dog food contains too much fibre and would make him poop five to six times a day,” said Cheung. “His stool would totally fill up three poop bags. Other people in the dog park would laugh when they saw us collecting all the poop on the ground.”

Having such a large dog has also led to some bizarre events at home, such as the time a guest fell through a cavernous hole in the couch. 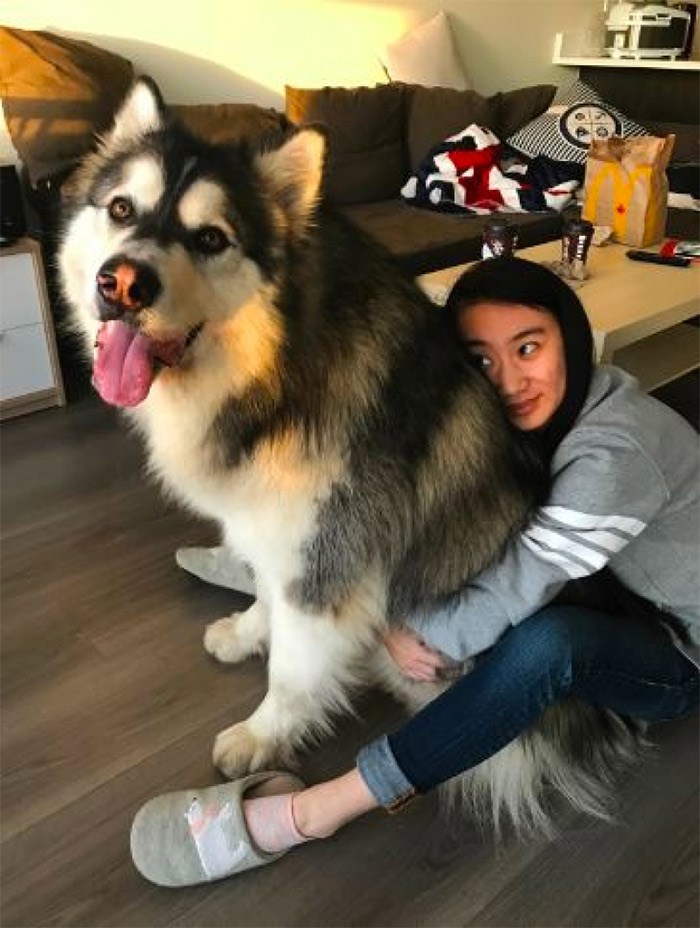 “We then turned the sofa upside down, and found a huge hollow cavern there, with a big hole cut from the back of the sofa,” said Cheung. “It turned out that Tyson had been secretly playing with his friend, the sofa, for a year.”

Since Tyson is a big guy, he requires a lot of exercise to burn his energy.

“He needs minimum two hours of exercise daily. If he doesn’t exercise enough, he would lay on the floor without moving and eating, looking like he is depressed.”

That means lots of dog park visits for the friendly pooch, plus swims at the dog beach at least three times a week.

“We are students here and our parents are in other countries,” said Cheung. “Though it takes us a lot of time to take good care of Tyson, in general, we feel happier to have his companionship.

“We actually got healthier too, as we get to walk around for a minimum of two hours every day. This is a better activity compared to eating out or going drinking.”

Though raising Tyson is a lot of fun, Cheung and his girlfriend sometimes feel overwhelmed with the public’s enthusiasm towards this big guy.

“One thing that bothers us a lot is that many people on the street want to get a picture with him, especially if one person starts to take pictures, other people around follow along.

“One time there was a person in a car in the middle of the road taking pictures of Tyson, even though the traffic lights turned green; they were not driving, just taking pictures.”