Cineplex’s big plans in Burnaby have been significantly delayed by COVID-19, but they will still be completed, according to the theatre giant.
Oct 13, 2020 1:31 PM By: Chris Campbell 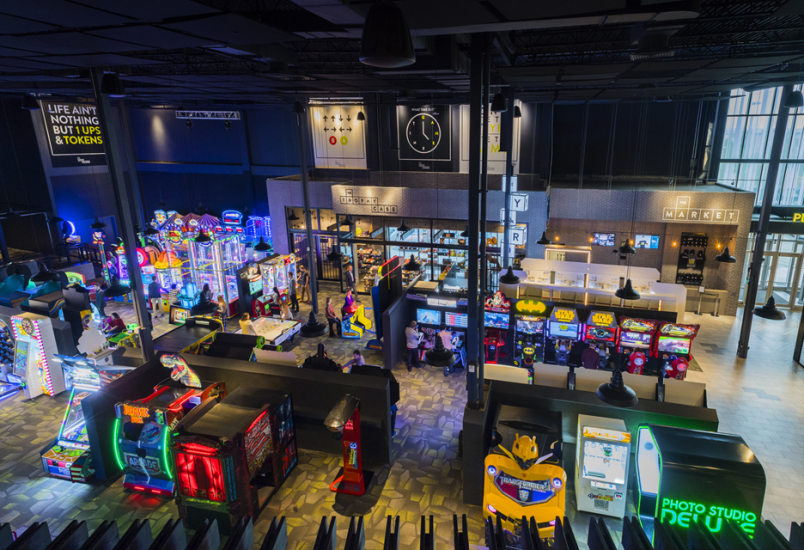 This photo shows what the kind of look the Rec Room's games area at the Amazing Brentwood in Burnaby will have when it's completed. Cineplex photo

Cineplex’s big plans in Burnaby have been significantly delayed by COVID-19, but they will still be completed, according to the theatre giant.

Cineplex has been building one of its Rec Room entertainment complexes and a five-screen VIP theatre in Burnaby at the Amazing Brentwood.

Burnaby NOW toured the Rec Room construction site earlier this year and Cineplex said it was set to be open in the spring. The facility under construction was truly mind-blowing and would set a new standard for entertainment in Burnaby.

On Tuesday, however, a Cineplex spokesperson said via email that “both projects are proceeding as planned” and that the Rec Room would hopefully be open before the end of 2020.

Located in the Amazing Brentwood’s expansion, this will be Cineplex’s ninth Rec Room in Canada. It’s more than 40,000 square feet of “eats and entertainment.” The Rec Room is a separate experience from Cineplex’s movie theatres that can accommodate as many as 1,300 people (pre-COVID numbers) with private space for celebrations, corporate events and parties. Half of the space will be dedicated to dining and live entertainment, with the other half set for games and feature attractions. This includes a massive attractions area where gamers of all ages can play more than 90 amusement games, well as ping pong and pool. There will also be a virtual reality attraction included.

As for the VIP theatre, that might take a little longer to open as Cineplex struggles with a lack of available movies thanks to skittish studios.

This comes at a time when Cineplex Inc. CEO Ellis Jacob says the country’s largest movie theatre chain is prepared to be "agile and nimble" as film exhibitors face historic unpredictability during the pandemic.

The head of Cineplex told investors at the company’s webcast annual meeting that executives are ready to "make the necessary changes required" to push through the next six to 12 months.

He says that could include reducing lease costs and making further reductions to payroll expenses.

Jacob offered the reassurance to investors only three days after Ontario’s revised COVID-19 restrictions led Cineplex to temporarily close 22 of its 68 Ontario theatres for nearly a month on less than a day’s notice.

The sudden government decision was a blow to Cineplex’s plan to host the annual meeting in-person at one of its Toronto theatres, a symbolic gesture of confidence in its business model.

Revised provincial regulations also forced Cineplex to close two theatres in Moncton, N.B. on Friday, and another 17 in Quebec earlier this month.

Jacob said despite tighter restrictions that may suggest otherwise, Cineplex has had zero cases of COVID-19 traced back to its operations since reopening in the summer.

"We are definitely disappointed with the government's decision to close our theatres, particularly because we know how hard our local theatre teams have worked since our reopening to keep movie lovers safe across the province and the country," Jacob said. "We feel that these forced closures, given our proven track record are excessive, and do not consider our team's efforts."

Cineplex has endured a constantly changing Hollywood release schedule that's seen major studios push many of the year's most anticipated titles into 2021, including most recently the James Bond film No Time to Die.