Test your true north knowledge with this Canada Day quiz 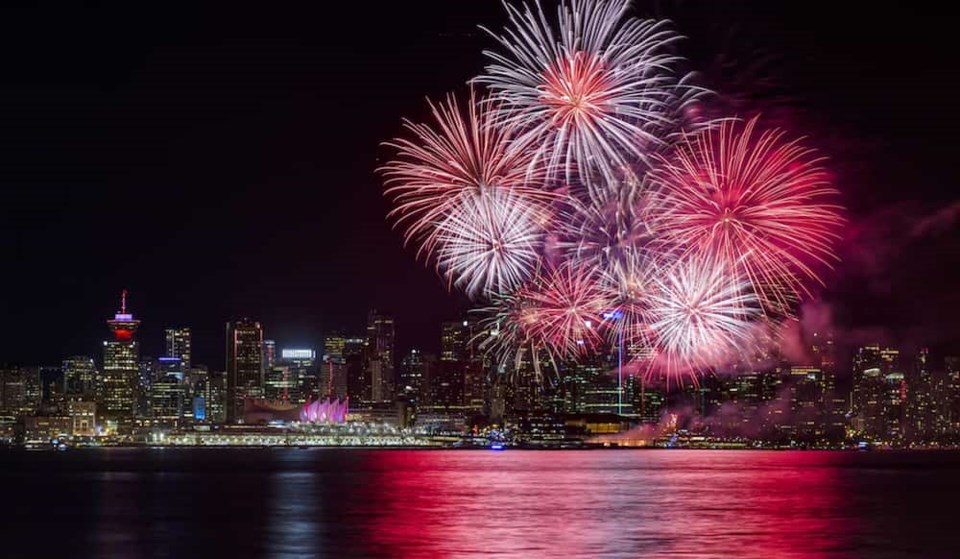 Ready to put your Canadian savvy to the test? Celebrate Canada Day with 40 questions about our home and native land. Good luck, eh!

1. Canada is known for its abundance of lakes and rivers. What percentage of the planet’s total freshwater is found in Canada?

3. While Whistler may be the hands-down best ski resort in Canada (not that we’re biased), it’s far from the first to have been built. In what town was the first Canadian ski resort built in 1917?

5. Which of the following popular games was invented in Canada?

6. Pique celebrated its 25th anniversary in 2019. What was Canada’s first newspaper?

7. Although its 19th annual edition was cancelled due to COVID-19, this B.C. town has been holding its annual Elvis Festival every year for nearly two decades.

10. Canadians, for the most part, love dogs. While we’d recommend heading to a local shelter if you’re looking to give a furry friend a forever home, this breed of dog was named the most popular in Canada by the Canadian Kennel Club in 2019.

1) D. According to the Government of Canada, less than half of this water—about seven per cent of the global supply—is “renewable.” 2) A. 3) D. According to the Canadian Encyclopedia, “The first professional ski instructor in Canada, Emile Cochand, was brought to the Laurentians from Switzerland in 1911. By 1917 he had built the first Canadian ski resort, Chalet Cochand, in Ste-Marguerite, Qué.” 4) C.  Although “O Canada” has served as the de facto national anthem since 1939, the song was officially proclaimed as the country’s national anthem in 1980. 5) B. The game was created in December 1979 in Montreal by Canadian Chris Haney, a photo editor for Montreal’s The Gazette, and Scott Abbott, a sports editor for The Canadian Press. After the pair found pieces of their Scrabble game missing, they decided to create their own. 6) D. 7) A. For nearly two decades, dozens of Elvis impersonators storm into the lakeside town each June to put their Elvis-impersonating skills to the test onstage. 8) A. 9) D. Laura Secord is heralded as a Canadian heroine of the War of 1812, after she walked approximately 32 kilometres out of American-occupied territory to warn British soldiers of an impending American attack. 10) B. German shepherds were named the second most popular breed, while golden retrievers rounded out the top three.

1) Which federal party failed to win a single seat in Canada’s 2019 election?

2) When Confederation occurred on July 1, 1867, which provinces made up the Dominion of Canada at that time?

3) Prime Minister Justin Trudeau landed in hot water last fall after old photos surfaced of him in blackface. The scandal broke after Time Magazine published a 2001 yearbook photo from what Vancouver private school Trudeau once taught at?

4) Which provincial health officer was paid tribute by famed designer John Fluevog with a pair of her own custom shoes during the COVID-19 pandemic?

6) Earlier this month, China’s envoy to Canada accused the U.S. government of using the case of a senior Chinese telecoms executive who was arrested in Vancouver on a U.S. warrant 18 months ago to create friction between China and Canada. Which telecoms executive was he referring to?

7) President Donald Trump did Canada-U.S. relations no favour during the COVID-19 pandemic when he:

A) Suggested stationing U.S. troops at the border
B) Criticized Trudeau’s hair
C) Ordered U.S. company 3M to stop shipment of millions of N95 respirators to Canada
D) A and C

8) Which Canadian province was the first to offer universal healthcare in 1947?

9) NDP Leader Jagmeet Singh was ejected from the House of Commons in June for calling Bloc Québécois MP Alain Therrien a racist for not supporting an NDP motion to do what?

10) After a significant and costly diplomatic push, Canada lost its bid for a coveted seat on the United Nations Security Council earlier this month. Which nations won the two available temporary seats instead?

1) C. 2) A. 3) B. 4) B. 5) D. 6) D. After landing in Vancouver in late 2018, Wanzhou was arrested on a U.S. extradition request in connection with the alleged defrauding of multiple financial institutions in breach of U.S. sanctions against Iran. 7) D. 8) C. Saskatchewan made hospital visits universal in 1947, then expanded this program to include regular doctor visits in 1962. 9) C. Singh stood by his comments after being kicked out of the House, saying that, despite several recent police-involved incidents of violence towards people of colour, there have not been any changes to federal policing in Canada. 10) B. With 130 and 128 votes respectively, Norway and Ireland won the two available seats. Canada earned 108 votes.

1) The fiddlehead fern is the one of the only native Canadian plants that has achieved commercial success as a vegetable. What time of year are fiddleheads best picked?

2) Tim Hortons finally put this increasingly popular ingredient on its menus this month.

3) Canadians love this junk food product, launched in 1937 in both Canada and the U.S., so much that they consume 55 per cent more of it per year than American consumers.

4) Despite its name, it was actually a Greek immigrant to Canada who invented this dish.

5) What has been the fastest growing segment of new users on Skip the Dishes, one of Canada’s largest food delivery apps, since the pandemic began in March?

6) Canadian farmers are facing a significant surplus of potatoes due to the COVID-19 pandemic. About two-thirds of the 4.8 million tonnes of potatoes grown last year were intended to end up at processing plants, where they would be turned into what?

7) True of False: Canada does not have any Michelin starred restaurants?

8) Where is peameal bacon said to have originated?

9) Which of these Cadbury candy bars originated in Canada?

10) This successful Vancouver restaurateur was consulted on developing the revamped menus of Steeps and Christine’s, Whistler Blackcomb’s mountain-top restaurants.

1) B. 2) D. 3) B. 4) C. Hoping to draw customers to his Chatham, Ont. pizzeria, Greek immigrant Sam Panopoulos started adding pineapple to his pies in 1962. 5) D. Canadian retirees make up the fastest growing demographic on the app, which might help explain why Skip the Dishes has reported that 5 p.m. is the new “rush hour” for orders. 6) B. 7) True. 8) A. Toronto’s William Davies Company, one of Canada’s earliest and largest meat packers, is usually credited with creating this blue-collar breakfast dish, which originally involved rolling wet cured pork loin in crushed yellow peas. These days, cornmeal is typically used in its place. 9) D. While there are similar bars sold under different names in other countries, Caramilk bars are only produced at Toronto’s Gladstone Chocolate Factory. 10) A. Hawksworth is now in his fifth year hosting a popular pop-up lunch series at Steeps, and along with helping transform WB’s on-mountain culinary offerings, has worked with the ski resort to train chefs at his eponymous Vancouver restaurant.

1. The Audain Art Museum hosted a special exhibit that ran until January this year highlighting three years of one artist’s life. Who was that Canadian artist?

2. Canadian indie-pop star Grimes welcomed a baby boy into the world this year alongside partner and tech billionaire Elon Musk. What was that baby’s unusual name?

3. A long-time Whistler photography contest called Deep Winter was put on hold this year. What’s the name of the photography event that quickly came together to take its place?

4. Which iconic Canadian album celebrated its 25th anniversary this year with an anniversary deluxe edition? (Hint: it also became a rock musical written by Diablo Cody in 2018.)

5. Like most award ceremonies this year, the Juno Awards were postponed. However, the winners will be announced in a virtual ceremony on June 29. Which of the following performers is NOT nominated for Artist of the Year?

6. Which Canadian music legend officially became an American citizen this year, after 54 years of living south of the border?

7. Which blockbuster hockey movie was, pre-COVID-19, shooting a reboot in Vancouver?

8. Spurred by the mass demonstrations against the police killing of George Floyd, books about race have seen a spike in sales. How much of an increase in sales did best-selling Canadian Author Desmond Cole’s book, The Skin We’re In: A Year of Black Resistance and Power, see in the week ending May 31?

9. Which Canadian TV show ended this year after a five-year run?

10. Which massive Canadian music festival moved to a drive-in format for this year and how many cars will it accommodate?

1. The Winnipeg Blue Bombers snapped the longest current Grey Cup drought, winning the club’s first championship since 1990, when they beat Hamilton last November. Which team has now gone the longest without a title?

2. Burnaby’s Christine Sinclair broke the all-time record for international soccer goals scored with her 185th career tally against St. Kitts and Nevis in January. Which American previously held the record?

3. Which Toronto Raptor made “The Shot” against the Philadelphia 76ers during the team’s 2019 NBA Championship run?

4. Whistler’s Gabby Flynn was golden at her sport’s World Age Group Championships in Japan in December. In which sport does she compete?

5. What have Super Bowl champion Laurent Duvernay-Tardif and hockey legend Hayley Wickenheiser both been doing during the COVID-19 pandemic?

6. How many players on the 2019 Toronto Blue Jays were the sons of MLB Hall of Famers?

7. Canadians Kia Nurse and Nayo Raincock-Ekunwe were teammates on which WNBA team in 2019?

9. Which major did Bianca Andreescu win last September to become the first Canadian to capture a Grand Slam singles title?