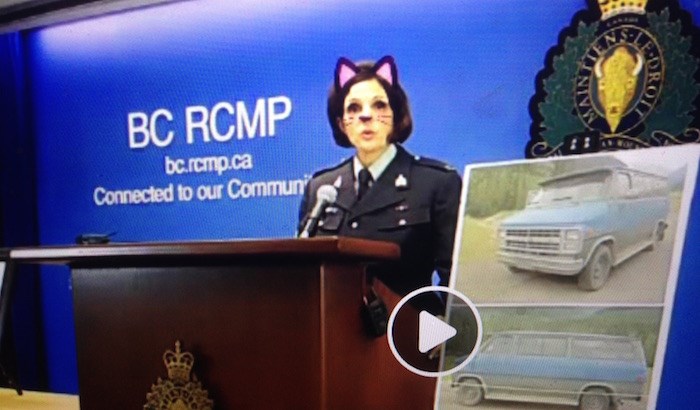 Sgt. Janelle Shoihet was speaking to reporters at the force’s Surrey E Division headquarters with a feed going live via the social network when the hack occurred.

Shoihet was reporting to media about the double homicide of Lucas Fowler of Australia and Chynna Deese of the United States sometime between July 14 and 15 in northern B.C. The investigation is in its early stages, and again pleaded to the public with information to help their investigation.

The audio on the feed was working poorly and close-up shots were blurred.

Commenters clearly thought the hack was the cat’s meow.

“What’s up the audio and cat ears??”asked one.“Love the cat ears,” said another.

“You better hide when she finds out you did this!! Lol,” said a third.

E Division media relations said they were looking into the hack and that the full news conference would be reposted.

Whether the ears and whiskers will be part of the repost remains to be seen.