Chef Regina Lee's family roots, and the blockbuster movie Crazy Rich Asians have inspired her to create an event featuring Singaporean foods and treats, made in the traditional Peranakan tradition, aptly named Crazy Rich Feast.
Oct 8, 2018 9:25 AM By: Maria Rantanen

Regina Lee has lived around the world and she has tasted and cooked many types of cuisines, but, as she’s gotten older, she has come back to her Singaporean roots, partly to share her culture and partly to help preserve a disappearing culinary art, the Peranakan tradition of cooking.

Lee, who has settled in West Vancouver with her family after living around the world for 20 years, has come to realize that instead of trying to blend in with other cultures, she should celebrate her own Singaporean roots and share it with her daughters and the broader community. This and the recent book and blockbuster movie Crazy Rich Asians have inspired her to create an event featuring Singaporean foods and treats, made in the traditional Peranakan tradition, aptly named Crazy Rich Feast.

“One thing that’s very big for me is food and connecting with people through food,” she said.

“It’s my first pop-up event of the year, my start for the year, to curate and to create shared connections through meaningful food experiences.”

Lee’s family is partly Chinese a but part of her family is Peranakan, descendants of Chinese and Malaysians who inter-married in Singapore where they were working as traders.

Lee said she used to try to blend in wherever she was living, but has realized she wants to keep her own cultural identity and share that with others.

“The more I’m away from home, the more I want to retain my traditions, but then when you come to a new country, how do you share that, how do you retain your culture, teach your kids where you’re from, and integrate with other cultures and share that,” she said. “Now I realize, the other way is more fun, when you share your culture, people understand you more, you get a bond, you get a community and actually that diversity can be a stronger element.”

Peranakan cuisine was fusion cuisine long before fusion cuisine was even a thing, combining Chinese cooking with Malay and Indian spices along with influences from the British and the many nationalities passing through this Southeast Asian trading post.

This is the cooking of Lee’s grandmothers and aunties and she has been collecting Peranakan recipes for years to keep this tradition alive.

Preparing Peranakan cuisine is intricate and tedious using a wide variety of ingredients and complicated cooking methods, but it is being lost in today’s fast-paced world, Lee said. The nonyas, the women, used to spend all their days in the kitchen, chopping, cooking and baking, preparing these meticulously designed foods for their families. 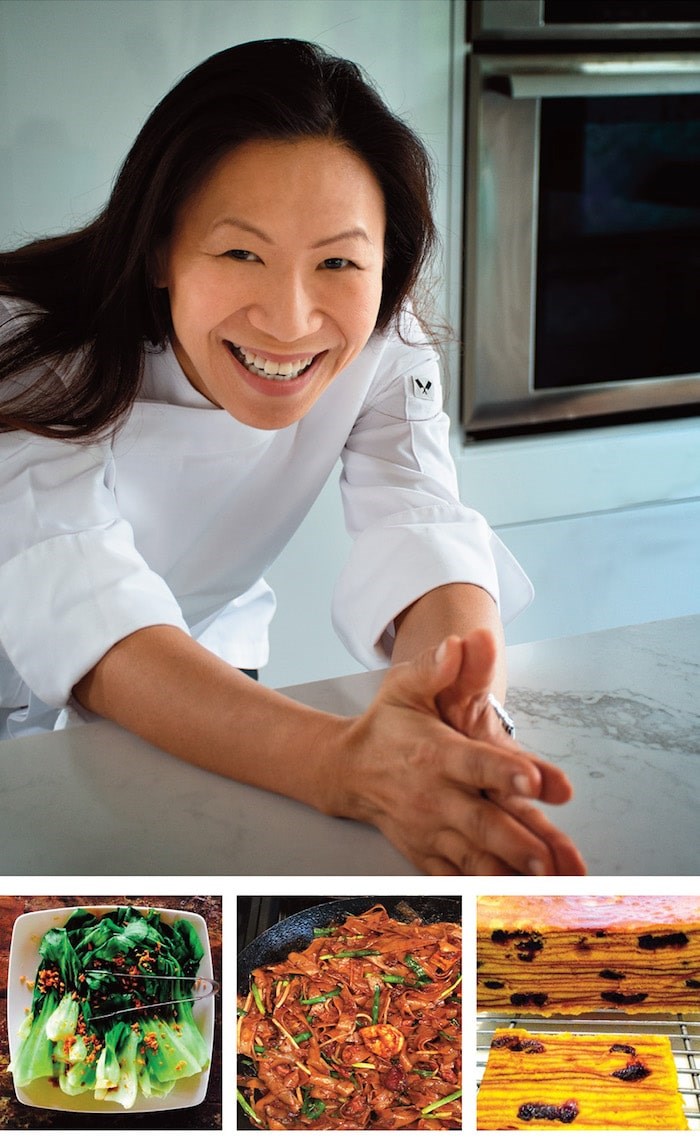 Lee has created a truly traditional Singaporean menu for the Oct. 20 event, set to take place at Bistro 101, the restaurant of the Pacific Institute of Culinary Arts on Granville Island.

One of the menu items is popiah, a fresh spring roll made from thin crepe with a lettuce wrap, filled with stir-fried jicama, bean sprouts, French beans, shredded carrots, shredded omelettes, Chinese sausage, ground peanuts and shrimp with a dipping sauce made of soy sauce, hoisin and shrimp paste. Another dish will be the famous Hainanese chicken, poached with ginger and served with rice cooked in chicken broth. There will also be laksa, a spicy noodle soup made of rice vermicelli with chicken, prawn or fish and served in a spicy curry coconut sauce. Other menu items include fried carrot cake, roja – a spicy fruit and vegetable salad – roti prata with dhal curry, and beef randang.

There are three desserts on the menu, Kueh Lapis, a grilled spice cake that is baked two millimetres at a time until it’s three inches high, chocolate chiffon cake, the subject of much discussion in Crazy Rich Asians and that Lee had to bake four times until she got the exact consistency she wanted, and Southeast Asian fruits.

Lee said Singapore is a lot like Vancouver with a mixture of cultures, and she wants Crazy Rich Feast to be a fun way to bring people together and raise awareness about the sharing of cultures – it’s a throwback to the movie and book.

“It’s not just eating – we wanted to recreate the moments of the movie and the book where it’s fun, and people can dress up as their favourite character, as simple as Rachel Chu or as fancy as Astrid – basically to have fun over good food and laughter,” Lee said. There will be entertainment and music as well.

Lee has seen Crazy Rich Asians twice and loves both movie and the book. Her love of the movie is two-fold – she loves how it shows families in all their craziness, something she thinks is universal, and she loves that it’s a foodie movie and book.

Lee said she could relate to the movie and book as the main character struggles with an identity crisis, family expectations, love – she called it the Asian Pride and Prejudice.

“It shows how families can be so crazy, whether it’s in the Western world or Asian,” Lee said.

People look at Lee and, they have a hard time figuring her out because she’s picked up different pieces of different cultures on four continents in the past 20 years – she is also married to a British-Italian.

Lee grew up in Singapore, but she and her family have been in Canada for three years after having lived in Kentucky, Denmark, Dubai, Viet Nam, Kiev and New Zealand.

“We chose to come here because we loved this place so much, it has all the values that me and my husband have, and it’s a great place to raise our girls,” Lee said. “Having moved around a lot we see this place as being truly amazing place in so many ways, in regards to values, and nature and sports.”

Lee has started a culinary business on the North Shore as well, called Gaia Kitchen, where she prepares frozen Asian meals and desserts from fresh, natural ingredients that can be ordered and then cooked and baked at home.

After the event on Oct. 20, Lee will be holding two Crazy Rich Feast cooking classes at the Pacific Institute of Culinary Arts that will be open to the public. The first one will be a holiday theme so participants can learn to make tasty canapes for upcoming Christmas parties.

The second one will feature a lesson on cooking Hainanese Chicken, the most famous Singaporean dish that many people fly to Singapore to taste.

Where: 101 Bistro, at the Pacific Institute of Culinary Arts - 1505 West 2nd Avenue, Vancouver