Can you help this Northern Irish woman find 'the man with the maple leaf' from Vancouver?

Anyone you know from the Vancouver-area who make a stop at the Giant's Causeway in Northern Ireland on Sept. 7? If so, you could help make one woman very happy.
Sep 11, 2019 7:32 AM By: Lindsay William-Ross 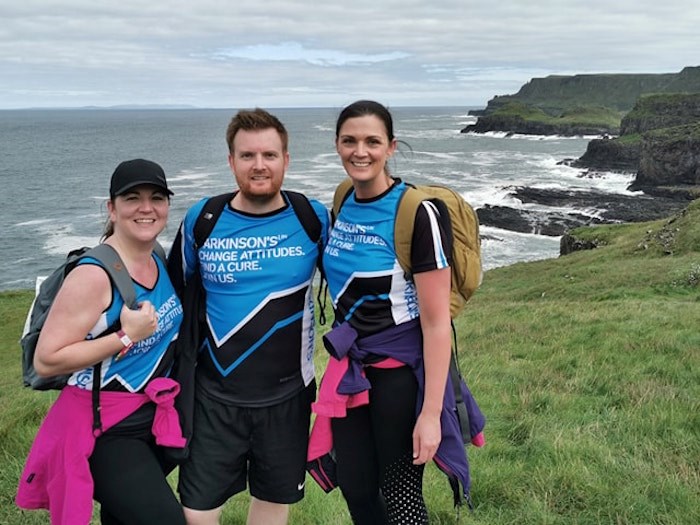 Debi Turner, left, and companions, during the Causeway Coast Challenge on the Giant’s Causeway in Northern Ireland on Sept. 7, 2019. Photo courtesy Debi Turner

Earlier this month, Debi Turner was spending her Saturday morning in one of the world's most beautiful places, walking a 19-mile route along the rugged Northern Irish coast as part of a charity event.

With its 40,000 interlocking basalt columns, the Giant's Causeway in County Antrim has been a tourist destination since the 19th century - in fact, the UNESCO World Heritage Site is one of Northern Ireland's most popular tourist destinations.

So it's no wonder, then, that on September 7, 2019, a man from Vancouver was among the many visitors from around the globe enjoying the Giant's Causeway, along with all the charity walk participants, like Turner.

Turner, who reached out to V.I.A. via Facebook, says she encountered the gentleman, who appeared to be traveling with a small group of people - presumably relatives - and they enjoyed a chat.

The man, who did not give his name to Turner, congratulated her on their participation in the charity walk, and obliged Turner when she asked for a photo with him.

Turner gave her phone to a young man traveling with the "lovely gentleman from Vancouver" for the snap, and the young man also took the same shot with his phone.

The kicker: Turner says she accidentally deleted the photo.

"I am devastated that I have lost this photo," Turner lamented in her message to V.I.A.

Turner is hoping to get the word out in Vancouver to see if the man and his travel companions can get in touch with her to send her their copy of the photo.

Not much personal information was exchanged during this brief, but special encounter, said Turner. She does know that the Vancouverite is 67 years old, and she joked with him she would refer to him as "the man with the maple leaf." That's because he "was wearing a flat cap with a Canadian flag badge on the side" when they met along the Giant's Causeway.

Does this photo-op sound familiar to anyone in Vancouver? Anyone you know from the lower mainland who make a stop at the Giant's Causeway in Northern Ireland on Sept. 7?

So far, Turner has shared her story on her personal Facebook page and has asked friends around the globe to re-share her story, but we're hoping we can spread her plea a little further. Turner is asking Vancouverites to get the word out that she's looking to reconnect with "the man with the maple leaf."

If you know who this is, you can contact us here at V.I.A. by Facebook messenger or by email (contact@vancouverisawesome.com) and let's see if we can reunite Turner with this mysterious gentleman from our awesome city!