If you're a fan of Grant Lawrence 's first two memoirs ( Adventures in Solitude and The Lonely End of the Rink ) you're in for a treat with his latest, Dirty Windshields .

If you're a fan of Grant Lawrence's first two memoirs (Adventures in Solitude and The Lonely End of the Rink) you're in for a treat with his latest, Dirty Windshields. And if you're just walking in the door to the Lawrence party you'll be tickled. 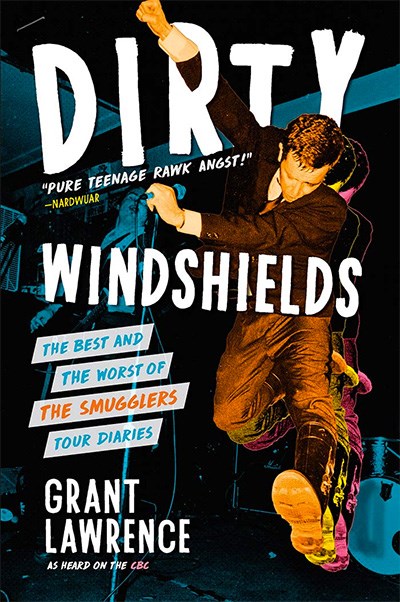 ‘Dirty Windshields’ is out now

In this latest title from Douglas & McIntyre he takes us on a trip in a dirty van across Canada, the US and a few other countries that his punk rock band The Smugglers toured in the 80's and 90's. In time they gained international notoriety but not quite rock star status, and the stories he tells remind us that life is truly not about the destination, but the journey itself. This one in particular happens to include Fugazi cooking breakfast for its author's parents, playing at the legendary CBGB, a great many hijinx, a positive review in Rolling Stone magazine, some dashes of drama and a few "sexual misadventures". It'll take you on the road without having to learn an instrument, suffer the farts of bandmates or endure the highs and extreme lows that can go with being a touring Canadian musician.

Grant kept journals throughout his entire experience as the band's frontman, some of the originals are even woven in. He drew from them heavily while putting together this rollicking trip down memory lane. But while the stories were written down and catalogued long ago, its Lawrence's signature embellishments that remind you why he's one of Canada's best storytellers; some of them literally jumped off the page, wormed through my eye sockets and tickled my brain for a few minutes. Like the yarn about the rowdy headbangers the crew encountered while touring Oregon and how their license plate read "RU 18 YET". It provided a belly laugh and I imagine it has evolved over the years of his telling it. He says in the book that on the road "stories were told and retold, each retelling wilder than the last". And in fact he told me years ago that he was putting these tour stories into a book and I vaguely remember him saying it was going to be his first one, but I'm glad we're just getting them now, two books after he's really honed his craft. Not only has he gained experience as an award winning author but these stories are now being told at a time when they've arguably reached their peak and are at their best. Grant certainly is.

Pick up a copy of Dirty Windshields at Pulp Fiction, the Paper Hound, on the ferry, from Grant directly (signed!), or wherever you buy your books.

- 'Bones of the Coast' from Cloudscape Comics