Elvis is back in the building. That’s how Eli Williams, an Elvis Presley tribute artist, feels about the quirky discovery of a cool piece of artwork he made years ago.
Aug 24, 2019 5:09 PM By: Sandor Gyarmati

Elvis is back in the building.

That’s how Eli Williams, an Elvis Presley tribute artist, feels about the quirky discovery of a cool piece of artwork he made years ago that turned up at a local antique store. 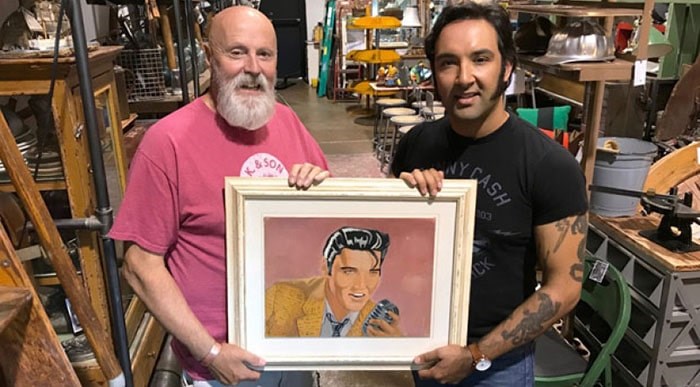 Dragonfly employee Bob Saunders (left) purchased a painting made by Elvis impersonator Eli Williams at the Star of the Sea Catholic Parish flea market in White Rock, returning the artwork to Williams who lost it several years ago. Photograph By Sandor Gyarmati/Delta Optimist

Born and raised in Ladner, Williams was busy last week with his girlfriend Sarah Stonehocker putting up posters around town for his Sept. 28 show at Genesis Theatre when they reached Dragonfly Antique & Salvage on Chisholm Street.

Employee Bob Saunders, who’s a picker who hunts down unique items for the store, gladly agreed to put a poster in the window. While in the store something for sale hanging high on the wall caught Stonehocker’s eye.

Turns out it was a painting of The King that Williams did for his Grade 12 art class at Delta Secondary back in 2006. He had it hanging on his own wall until he moved a few years ago and the painting somehow got lost.

“It was the coolest thing seeing it hanging there. I climbed up to have a look to be sure and there it was. I don’t know what happened to it, maybe got lost in the shuffle,” said Williams.

During a recent picking mission, Saunders purchased the painting at a flea market at a White Rock Catholic church.

“They had lots of paintings and amongst all the paintings they had, this one really stood out. I really liked it and how well done it was,” explained Saunders.

Williams assumed the painting was still in storage, so he was pleasantly surprised when Saunders, who said it’s an impressive piece of artwork for a high school student, didn’t hesitate to give the painting back to him and wouldn’t accept any money for it.

Saunders said it was his privilege to repatriate art to its original owner, noting, “That’s just what we do around here. Anyone of us would have done it.”

Williams is a well-established Elvis impersonator who has won contests, including the annual Penticton Elvis Festival. He’s also performed around North America, recently wrapping up a two-year gig at Memories Theater in Pigeon Forge, Tennessee. This summer he moved back to the Lower Mainland and resumed his regular career as a graphic artist, but still performs locally.

His high school Elvis painting wasn’t framed but the mystery owner who somehow obtained it put it in a nice vintage frame.

Store manager Matt Maxwell, also a big-time Elvis fan, laughed he had been considering keeping the artwork for himself before Williams came into the shop.

For more information about the Sept. 28 Genesis show, check out Eli Williams – ETA on Facebook.