Vancouver's 29th annual fireworks extravaganza is set to showcase the pyrotechnical skills of India, Croatia and Canada as the three countries light up the sky this summer.
Jul 15, 2019 6:10 AM By: The Canadian Press

Vancouver's 29th annual fireworks extravaganza is set to showcase the pyrotechnical skills of India, Croatia and Canada as the three countries light up the sky this summer.

India will start off the Honda Celebration of Light festival on July 27, with Croatia taking centre stage on Aug. 3 as the first-time competitors take on team Canada, which will show off its stuff on July 31. 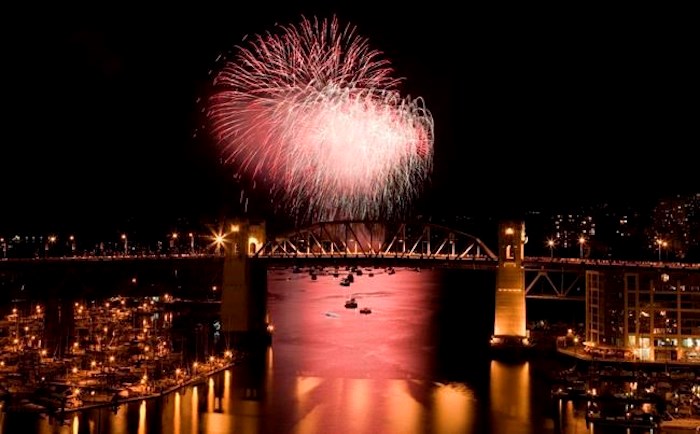 The Burrard Street Bridge is seen in the foreground as fireworks from team China blast over the waters of English Bay during the 21st annual Celebration of Light in Vancouver, Saturday, July 30, 2011. Vancouver’s 29th annual fireworks extravaganza is set to showcase the pyrotechnical skills of India, Croatia and Canada as the three countries light up the sky this summer. THE CANADIAN PRESS/Jonathan Hayward

Every year, an estimated 400,000 people flock to the downtown core each night of the 10 p.m. show, preceded by an all-day family friendly affair that includes food trucks, a stage at Sunset Beach featuring a variety of musical and cultural performances, some linked to the countries mesmerizing crowds at night.

Paul Runnals of the event production company BrandLive has been executive producer of the festival for the last nine years and said Vancouver boasts the largest offshore fireworks event in the world, with an unbeatable setting at English Bay.

But the future of the festival that began in 1990 didn't seem so bright after 2000, when a tobacco company stopped sponsoring what was then called the Symphony of Fire after federal rules prevented such advertising.

"There were a number of years just prior to us coming on board that it was a bit of a running joke," Runnals said of the festival before Honda took over sponsorship. "Every year, it was: 'Are the fireworks going to happen this year?' There were a couple of years where they were teetering on the edge of being cancelled."

BrandLive reduced the event to three nights from four and built ticketed areas that now include paid seating at bleachers, two lounges and cabanas to cover the cost.

Admission is otherwise free for thousands of people who flood the shores of English Bay, Sunset Beach, Vanier Park, Kitsilano Beach and watch from balconies near and far.

Runnals said seven judges, including representatives from the City of Vancouver and the park board, will have the task of determining the winner, to be announced on Aug. 6.

Audience members are also welcome to vote by a mobile app, but he said those votes will not be factored into the judges' decision, which is based on scoring criteria including technicality.

Azan Morani, creative director of Mumbai-based Amir Morani Fireworks, said team India will start arriving in Vancouver on July 23 to prepare for his company's first show in North America since its founding by his grandfather in 1937.

Morani said the 25-minute spectacle will include a heavy emphasis on gold to dazzle audiences in keeping with the significance of the colour in India.

The fireworks will be synchronized to a mixture of modern and classical Indian instrumentals as well as English pop numbers and the theme music from "Game of Thrones," but using Indian instruments, Morani said on the phone from Jeddah, Saudi Arabia, where he was directing a show until July 18 before returning home and then heading to Vancouver.

"It's the first shot for India so we really want to set the bar high," he said of the competition in Vancouver. "I believe they're also very good companies that we're dealing with," he said of the Croatian and Canadian teams. "So it really comes down to winning people's hearts."

Team Canada's lead designer Sean Morris, of Firemaster Productions, said audiences can expect a "very colourful" show but the star will be the soundtrack of upbeat Top 40 tunes from the 1970s to today, including hits by Canadian powerhouse Shawn Mendes, rising Halifax singer Ria Mae, Toronto electronic band Dragonette as well as Imagine Dragons and Abba.

Instrumentals are out and the theme will be happiness, Morris said, adding he wants the audience to move to songs like "You Spin Me Round" by English pop band Dead or Alive, which had its heyday in the '80s.

Morris said he's confident Canada has an edge in the competition after the country's triumph last year at the Blackpool World Fireworks Championships in England, following its win there in 2014.

The Croatian team could not be reached for comment.

Kelly Guille, the festival's pyrotechnics expert, said all three teams are trophy winners and in Croatia's case, a company called Mirnovec Pirotehnika is known for using single, tight shots that are intricately timed to the music "versus bigger shots that flood over time."

Public transit, biking and walking are the best ways to get to some great vantage points in the city's West End and Kits neighbourhoods though fireworks fans are advised to arrive early at any of the popular non-admission sites.

Tickets in bleachers range from $44 to $49 while those in two separate lounges offering food and alcohol go for $159 to $199 and $169 to $209, the latter boasting the closest view to the action. Reserve seats online here.