It's the most wonderful time of the year. The leaves are turning to shades of purple and red, the nights are getting longer (meaning you can stay out further into the wee hours, guilt-free) the scent of burning pumpkins is in the air and it's time for round-the-clock horror movies and mini-chocolate bars for breakfast. It's Halloweek, everyone, and you have five nights left to brave the Vancouver tradition of Fright Nights at Playland!

Don't get me wrong, Fright Nights still is mostly a swarm of obnoxious suburban teens, but if you can manage to have a few drinks in the ‘hood  then it dulls the sting and opens you to giddy times of rides and screaming in haunted houses (I recommend Jackalope's  Neighbourhood Dive near Templeton to get you in the mood with some taxedermy and creepy art.) That said, if you were planning to sneak in a flask, think again. The security at Fright Nights rivals the airport. I may have been able to keep my shoes on, but security even checked inside my sequin Choco-Cat change purse. My CHANGE PURSE. They unzipped it and actually rifled around my meager collection of random foreign change and slips of paper. (Maybe an adult lady with an anime change purse can only be assumed to be carrying drugs?) I even had my breasts patted down. I may have been able to get away with a wine bra, but not much else.

When you get through the gates, if you don't feel too violated, go directly to the new haunted house, Keepers Doll Factory: 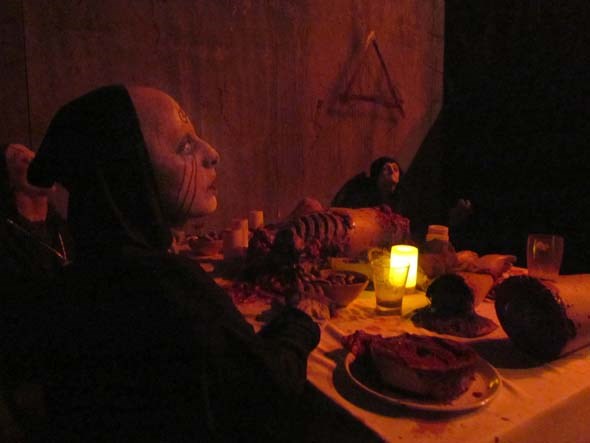 The doll factory starts out by locking you in an elevator-like box to shake you into the mood, then leaves you to wander through a maze of impressively researched bloody symbols that is full of anamatronic dolls and the occasional human spook. I made a game out of trying to find the real person in the scenes, and they still creeped me right out. Did I mention anamatronic dolls? Because I LOVE ANAMATRONIC ANYTHING. Shaky, jerky, mechanical bloody mannequins and dolls everywhere. It was like a fabulous wonderland I could just curl up and live in. I wanted to touch everything, I was giddy. There was even a black mass! Best haunted house in the history of Fright Nights. Can I just pour on some blood and join you? 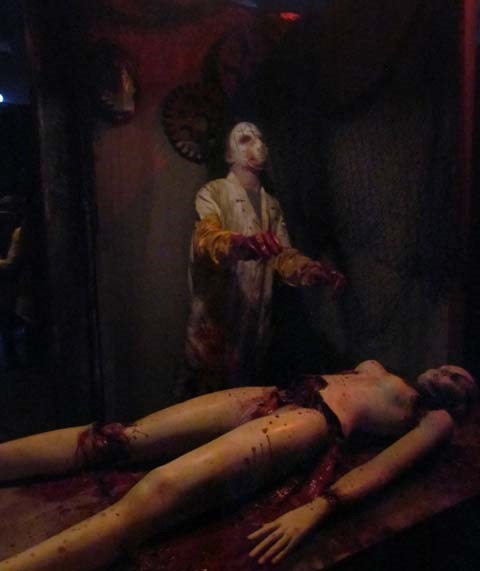 The house to miss, despite the cool entrance, is definitely Darkness: 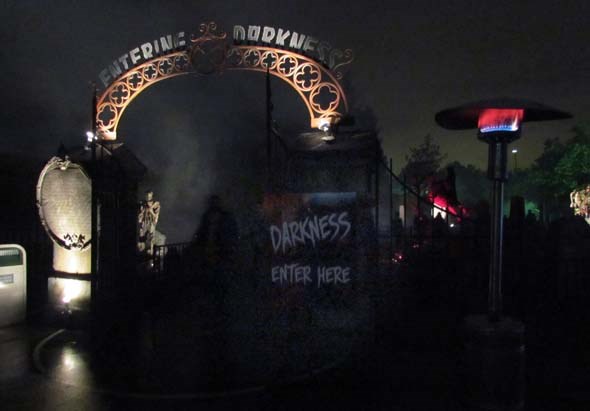 This one was 45 mintes in line for a quiet wander around a sparsely (and a little brightly) decorated tent. When the actors finally jumped out of their few hiding places, I almost wanted to pity-scream.

Exiting was the best part of Darkness since I could then go get spooooky burgers in a cone. Why do they come in a cone? Who cares! 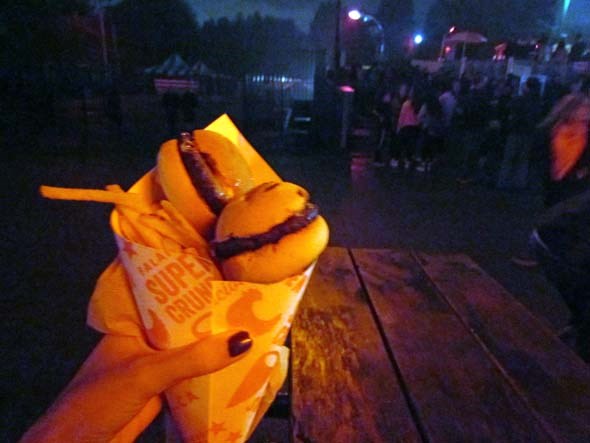 There are also five more haunted houses that are better than Darkness but not as good as Keepers Doll Factory, the best rides are all out (The Coaster, over and over until we hurt, anyone?) and there's a live stunt/carnival show with the Monsters of Schlock if you need some stomach settling time between rides.

Hours, tickets, and other stuff about Fright nights can be found at FrightNights.ca