20 FREE things to do in Metro Vancouver this Christmas

Christmastime doesn't have to be about spending gobs of money. Here are 20 FREE things to do in Metro Vancouver this Christmas.
0
Nov 16, 2017 10:33 AM By: Lindsay William-Ross

Christmastime doesn't have to be about spending gobs of money. Whether you're a Christmasholic, saving up to find your place in Vancouver's crazy real estate market, or raising a family on a budget, there are plenty of things to see and do this holiday season that don't cost a thing.

Here are 20 free things to do in Metro Vancouver this Christmas. 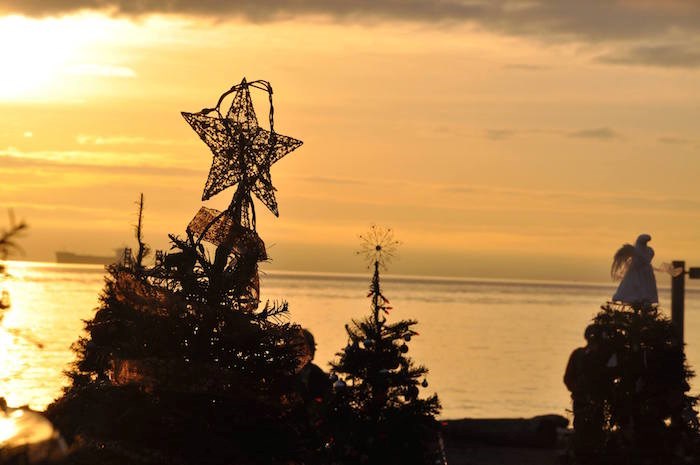 The annual Dundarave Festival of Lights kicks off with a Christmas tree decorating beach party on November 26. On the four Saturdays leading up to Christmas, stop by for an afternoon of free concerts to spark your Christmas spirit. The official lighting of the Festival’s Christmas tree forest takes place at dusk. The Christmas trees will remain on display until December 31, 2017. Check their website for more details about all the holiday activities.

The big man in red arrives at Lansdowne Centre in Richmond on Saturday, November 18, and to welcome him children's entertainer Charlotte Diamond will give a free Holiday Delight Family Concert at 1 pm.

For the past 30 years, Christmas at Canada Place has been one of Vancouver’s favourite holiday events, bringing communities together to celebrate the festive season while raising funds and awareness for Strathcona Community Centre’s Food Security for Children program. Highlights include the Woodward’s Windows, the Avenue of Christmas Trees, festive arts and crafts, and much more.

For the sixth year running, Yaletown will transform into a magical Christmas CandyTown for one day, perfect for kicking the holiday season into high gear. CandyTown will feature carriage rides by donation, a live ice sculpture, Yuletide music, tons of decorations, plenty of treats, and Santa Claus himself.

When: Saturday, November 25 from noon to 7 pm

Stroll through the streets of the Burnaby Village to see wreaths, cedar swags and vintage-themed displays will. Special entertainment is scheduled throughout the season including theatre performances, community choirs, street characters and musicians. Many family-favourite activities are back including a craft for children, baking in the Farmhouse and, of course, visits with Father Christmas. 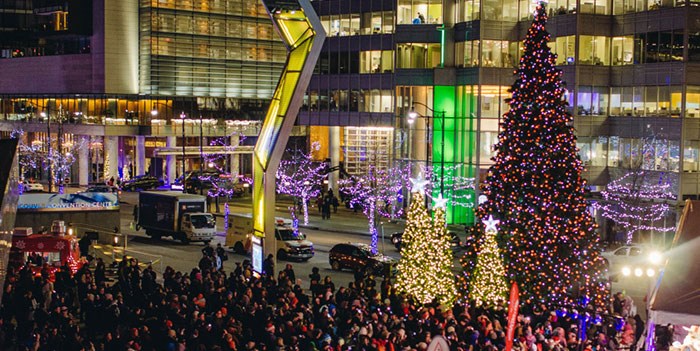 People are always asking when it’s appropriate to start decorating the house, well, how about when the city’s tree is officially lit! Join in on the lighting ceremony and all the other family friendly activities this year at Robson Square.

Park & Tilford is set to light up the season with the 28th annual Holiday Hi-Light Festival at Park & Tilford Gardens. This annual event features a majestic festival of lights with over 150,000 on display over 3 acres. The lights turn are on between 5 and 9 pm daily between December 1 and 31. Entry is by donation with proceeds going to support the North Vancouver firefighters, and their various appointed charities. An opening night event on December 1 from 7 to 10 pm will include hot chocolate, live entertainment and a Light Up countdown. 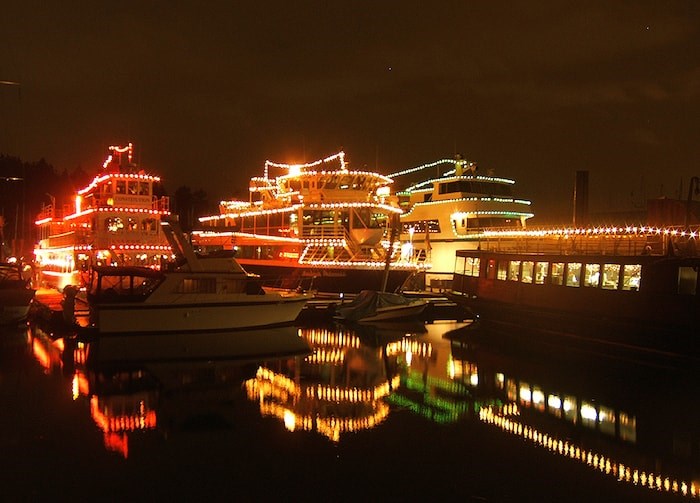 During December on Friday and Saturday nights there are several chartered boat companies that offer carol ship cruises. The boats are decked out in lights and sail around False Creek and Coal Harbour and elsewhere along the water, visible from multiple points on land. You can of course pay to go on a cruise, or plan on watching them float by, which is absolutely free.

When: Friday and Saturday nights in December

Where: Various locations along the water

Whether you’re with the kids, in need of a romantic night out, or looking to laugh your head off amongst friends, there’s no place more ideal than the Robson Square Ice Rink. Skate rentals are $4.00 but it’s otherwise free for you to enjoy.

The Shipyards will be transformed into a winter wonderland, filled with the sound of music, carols and the inviting smell of free warm coffee, tea and hot chocolate. This family-friendly event will include free fun for all! Enjoy ornament/lantern making, gingerbread decorating, storytime tent, face painting, balloon creations, and Christmas carols. Of course, Santa and Mrs. Claus will be paying a visit. 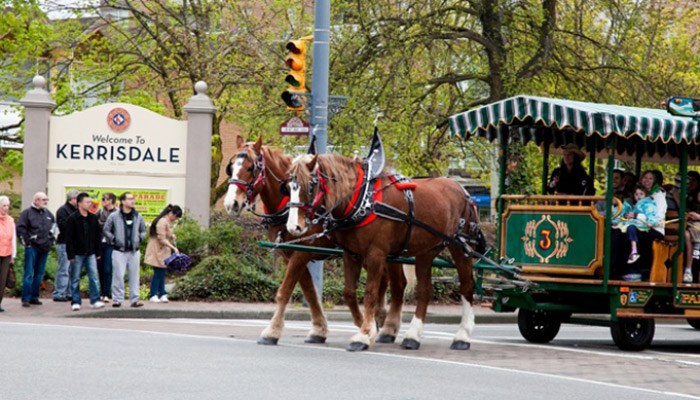 Free horse carriage rides and plenty of seasonal cheer for the whole family, every Saturday in December.

Ring in the Holiday with free entertainment courtesy of Wesbrook Village. Holiday in Wesbrook will feature four familiar holiday scenes, made entirely from over 2,500 biodegradable, nitrogen-filled balloons. There will also be a Holiday craft fair, carollers, and photos with Santa on December 3rd.

Share the magic of the holiday season in Steveston Village with businesses decked out in holiday style and the arrival of Santa by boat. Visit the Gulf of Georgia Cannery, view the decorated Christmas trees. 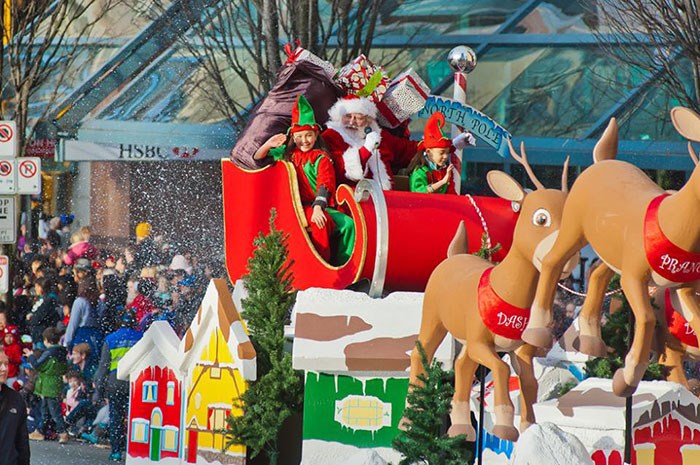 Yes, it's happening! The annual Santa Claus Parade is one of downtown’s most cheerful Holiday festivities. This year’s parade will feature over 60 floats and 2,700 participants. With the support of sponsors and parade spectators, the parade collects thousands of dollars and thousands of pounds of food for the numerous local families the Food Bank supports.

Where: 800 block of Robson Street, between Howe and Hornby, Vancouver

This unique carolling experience on the streets of Gastown features dozens of choirs performing new and classic songs in a variety of styles. Sing along as the best in show go head-to-head in a series of sing-offs and cheer on your favourites as they compete for awards from our celebrity judges.

Join the Ladner Gospel Assembly Carolers as they travel to the Dock to watch the boats come in in Ladner for two evenings. Event includes sing-a-long, special guests, music and story-telling. Ray Webber will be telling a Christmas Story. Christmas treats provided.

Where: Government Dock at the foot of Elliot Street, Ladner (Delta)

18. Winter Holidays at the Roundhouse

Join the Roundhouse Community Centre for photos with Santa, cookie decorating with Holiday themed cookies, and festive outdoor lighting. Bring the whole family to enjoy some hot chocolate while taking in this fun event. All proceeds benefit the Roundhouse and Elsie Roy after-school programming. Entry by donation. 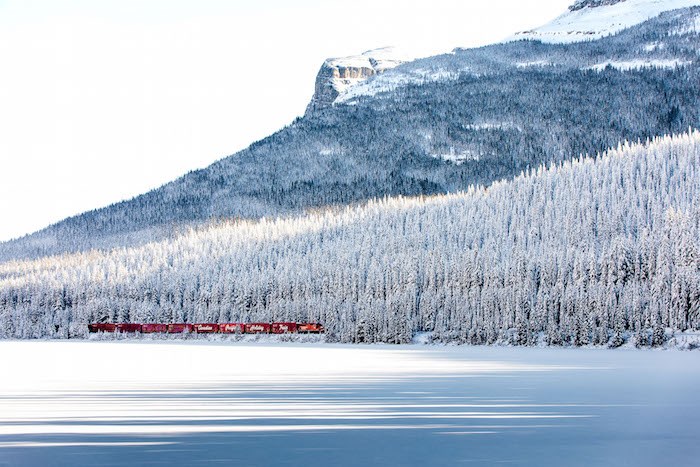 The CP Holiday Train passes through the Continental Divide

The CP Holiday Train is an annual Christmas tradition that began in 1999, and the fun, free community event pairs the excitement of a train lit up in holiday lights with the spirit of giving.

Hear Kwantlen stories, taste a chestnut roasted over the fire, and make a beautiful cedar ornament. Take a guided tour or see what Fort Langley's interpreters have baked up in the outdoor oven. Admire the giant outdoor Christmas tree and take family photos at various scenic spots on site. ??lel?m’ at the fort café will offer hot drinks, baked goods, tourtière and cookie decorating.