A massive Halloween Parade and Expo comes to Vancouver this weekend

“We are excited to present astonishing arts and performances to kick off a family friendly Halloween celebration for the general public,” Vancouver International Halloween Festival Society director Raymon He said in a news release.

During the Halloween Expo, which runs Oct. 11 to 13, artists will turn Vancouver’s city centre into a 2.5-dimensional wonderland with an outdoor performance in Vancouver Art Gallery’s north plaza and an indoor exhibition at UBC Robson Square.

This year’s performers include anime dance group Zeús LoveLive, video game bands The Runaway Four and missingNo, a Flamenco dance rendition of Alice in Wonderland and the comics comedy stylings of The Fictionals. A cosplay exhibit, artists will showcase handcrafted costumes.

In all there are about 20 performances and exhibits over three days.

The parade starts on Howe at Drake Street at 11 a.m. The procession will head north along Howe Street to Smithe and then back along Granville Street, ending at Drake Street.

In addition to the roads included in the parade route, the northbound lanes of the Granville Bridge will be partially closed from 8:30 a.m. until 12:30 p.m. Drivers coming into downtown are advised to use the Cambie or Burrard bridges instead. 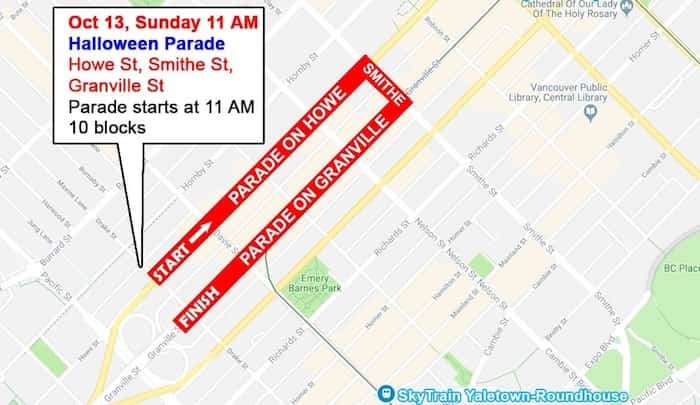 The organizers’ artistic vision for the weekend’s festivities is to advance arts inspired by comics, anime, video games and mythologies from diverse cultures. In order to celebrate Halloween in a family-friendly way, no blood and gore costumes will be allowed.

For more information and a full event listing, visit VanHalloween.com.