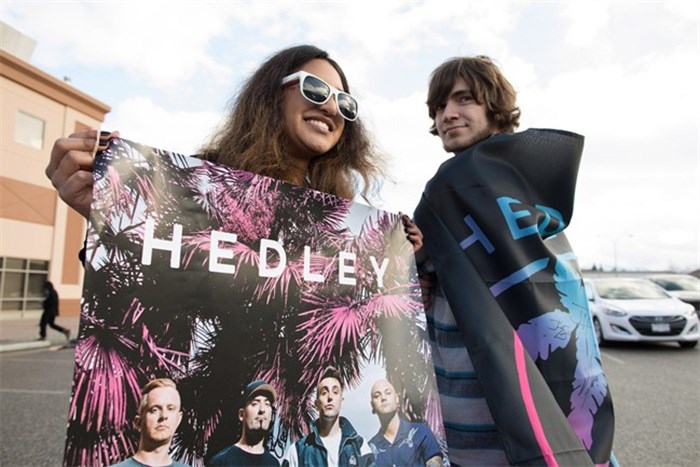 Hedley fan’s Charene Gonschorek, left, and Brandon Krys show their support for the band before the final concert of their current tour in Kelowna, B.C., on Friday, March 23, 2018. The band’s tour has been overshadowed by allegations of sexual misconduct. The band was dropped from their management company, The Feldman Agency, their songs were pulled from radio stations across the country and a planned performance at the Juno Awards was cancelled. Following the tour, Hedley has announced that they will be taking an indefinite hiatus from music. THE CANADIAN PRESS/Jeff Bassett

Their songs were the soundtrack to many fans' formative years, but as frontman Jacob Hoggard heads to court on sexual-assault charges, some Hedley followers are considering how the news impacts their devotion to the band.

As Hedley forged ahead with their tour earlier this year amid online accusations suggesting inappropriate encounters with young fans, 37-year-old Jodie Rae of North Battleford, Sask., said she sat down for a talk with her 10- and 11-year-old sons.

The family decided they would go ahead with plans to see Hedley's live performance in Saskatoon in March, because at that point, no charges had been laid against any band members.

But since Hoggard was arrested and charged Monday, Rae said she has been wrestling with conflicting feelings about the singer.

She said as a feminist, she can't just "jump on the bandwagon" and support Hoggard.

"I don't blindly just follow and have faith in somebody I don't know. All I can go off of are my experiences, which were amazing," she said. "Sometimes, you're going through something and the music just speaks to you, and you can't take that away."

Hoggard, 34, is scheduled to appear in a Toronto courtroom on Thursday to face one count of sexual interference and two counts of sexual assault causing bodily harm.

Police allege the offences happened on three dates in 2016 after a man met with a woman and a girl on separate occasions.

Hoggard, who is from Vancouver, has previously denied ever engaging in non-consensual sexual behaviour, but has said he behaved in a way that objectifies women.

But many Hedley fans say it's been hard to reconcile the charges against Hoggard with the man they feel they've come to know during the band's many meet-and-greets.

Rae said she has been following Hoggard's rise since his 2004 turn on "Canadian Idol." When her sons grew old enough, she started taking them to Hedley's concerts, and she said the pop rockers always made sure her family walked away with two souvenirs, one for each of her boys.

"Until there's more information out, I just have to take it as it is and only go off of my own experiences, which were really great," she said.

Despite her ambivalence towards Hoggard, Rae said she'll listen to Hedley's music "forever" on the CD player in her "old beater car."

Laura Carruthers, 32, handed out flyers in support of Hedley at the band's final concert in Kelowna, B.C., before the group went on an "indefinite hiatus" in March.

Carruthers said she was defending Hoggard against what she saw as a trial by social media, and now she hopes he'll have a chance to clear his name in court.

"They haven't gone through the justice system yet, so I'm still standing with them," she said in an interview Wednesday. "It's also only one member of the band, too. There's three other guys."

After years of involvement with the group, Carruthers she sees the music that has comforted her through hard times, and the band members who feel like "part of my family" as "one and one whole."

Emma, a former fan who asked that her last name not be used due to fears of online harassment, felt a similar devotion to the band during her eight years being known as "that Hedley girl."

But after the allegations surfaced, the Toronto university student said she returned to her hometown and tore down the Hedley posters that had covered her childhood bedroom "from ceiling to floor."

"A lot of people are talking about 'you need to separate the artist from their art,' and with this, I can't do that," she said.

Jackie Naccache, a 24-year-old in Waterloo, Ont., said as an aspiring music therapist at Wilfrid Laurier University, she is of two minds about whether Hedley's songs can be separated from the allegations against Hoggard, which left her feeling disappointed.

Her background as a classical musician enables her to differentiate between songs and those who play them, she said, but she also understands that music can engender deep emotional connections to certain periods in one's life, particularly during the tumult of adolescence.

She understands that the allegations may hinder some listeners from enjoying Hedley's songs, but she doesn't think we should be "policing" the music that may still hold special meaning for others.

"There a lot of emotions that are tied to the nostalgia that music gives," she said. "I don't think we should be taking other people's memories away by putting them down."

— with files from Victoria Ahearn