Here's how to check out Capture Photography Festival, taking place in Vancouver all month long 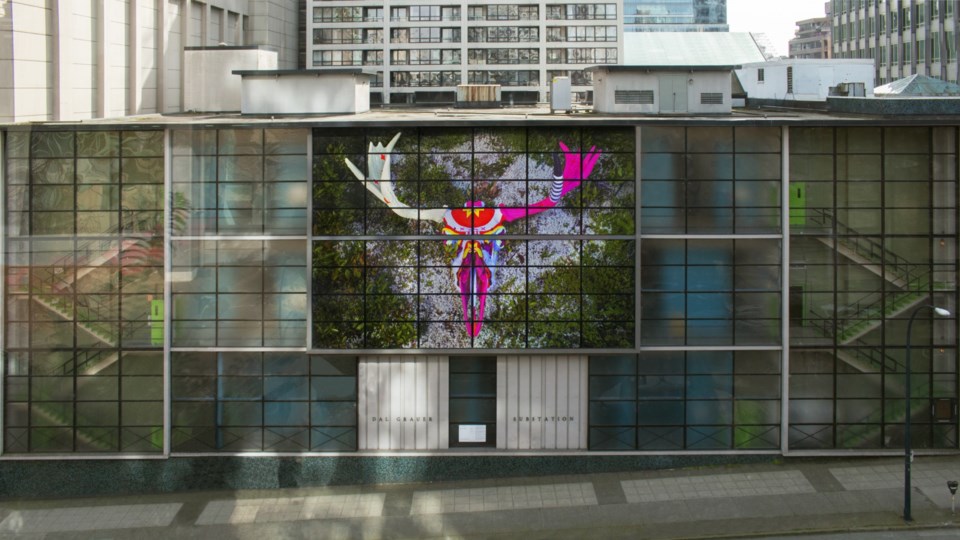 Mi’kmaq artist Jordan Bennett's al’taqiaq: it spirals, 2020, can be seen adorning the side of BC Hydro’s Dal Grauer Substation on Burrard Street this April, as part of Vancouver's 2021 Capture Photography Festival. The artist's inspiration for the piece reportedly came from a photograph of a Mi’kmaq porcupine quill basket created by ancestor Mi’kmaw artists, an artifact currently held in the collection of the Museum of Vancouver.Photo by Jocelyne Junker, courtesy of Capture Photography Festival

Despite the fact that the 2020 Capture Photography Festival was slated to take place just about two weeks after the COVID-19 wave first hit Vancouver's shores, the disruptive global pandemic proved to be no match for Western Canada’s largest lens-based art festival.

"It was a bit of trial by fire, but we did a quick digital pivot," recalled festival executive director Emmy Lee Wall.

Now, even with a worse wave washing over B.C. in 2021, the festival's ability to adapt hasn't faltered. "This year, we were able to plan our live-streamed talks and video productions to offer engagement to our audiences near and far amidst ongoing health concerns," she explained.

In addition to the numerous virtual events packing Capture's month-long calendar, the festival, first launched in 2013, is also celebrating its return to the streets and galleries of Vancouver throughout the month of April.

This year's festival consists of two featured exhibitions, 23 selected exhibitions and 17 public art projects. That roster is rounded out by 46 events, including four speaker series talks, and a series of digital tours.

High on Wall's list of must-sees in 2021 is Capture's first co-curated featured exhibition, titled Pictures and Promises, currently on view at the Vancouver Art Gallery. "Drawing on the Gallery's permanent collection, the exhibition examines the way artists have borrowed the language and formal conventions of advertising in historical and contemporary work," Wall, who also serves as the exhibition's co-curator, told Vancouver Is Awesome.

"It really encourages people to consider the codes and symbols of consumerism and the way in which contemporary society has been infiltrated by and affected by such imagery," she added. "As a society we are constantly bombarded by photographic imagery and the ability to think critically about what we see is a skill we should all hone."

Other major highlights of this year's festival include its Dal Grauer installation on Burrard Street, this year curated by Kate Henderson, featuring a site-specific commission by Mi'kmaq artist Jordan Bennett, and Feast for the Eyes, currently on view at The Polygon Gallery in North Vancouver.

"As someone who has been looking at Irving Penn's images of food in Vogue since I was 10, this show was a joy for me to see," said Wall. The "visually sumptuous exhibition exploring the rich history of food as an enduring photographic subject" shines a light on "the social significance of food, its abundant symbolism within the context of art, and the ways in which it connects us all," she added.

This month's celebration of photography might just provide audiences with a sense of connection that's been difficult to find over the past year, too.

"I had a studio visit a couple of months ago with an artist who spoke about the way a photograph gave her the pleasure of being attached to something that she might not otherwise have access to and I felt this perfectly described the power of photographs in this moment," shared Wall. "At a time when so many people face both physical and ideological separations, lens-based art is uniquely positioned to connect across these divides."

But sometimes, that ideological disconnect might still be present.

As is often the case with art, one of the festival's public installations—a series of photos gathered by renowned artist Steven Shearer, displayed across several billboards along the Arbutus Greenway—evoked a strong reaction from the public.

Wall said both the festival and Pattison, the company that owns the billboards, "received several strongly worded complaints" about the photographs.

Dubbed Untitled, the exhibit's description claims that "the reclining and sleeping figures presented on Shearer’s billboards recall the poses found in religious paintings and sculpture, wherein bodies appear to be in states of ecstasy or seem to defy gravity, as if they are floating, having been released of their earthly bonds.

"By virtue of giving way to their physical desire for sleep, the figures have unintentionally invited passersby to observe them at a heightened level of vulnerability and intimacy," it continued.

Noted Wall, "The general tenor of the complaints was that the images were disturbing."

The decision to plaster over the photographs ultimately didn't fall on festival organizers, Wall continued. "Pattison felt given the number and nature of the complaints that they needed to cover the images," she explained, emphasizing that "Pattison has been incredibly supportive of Capture and a champion of public art in the city."

Though Wall admitted she would have preferred to see Shearer's billboards remain on display for the duration of the festival—"Steven rarely shows in Vancouver so this was an important opportunity for a local audience to see his work," she said—the response prompted Wall "to take pause and consider the role of public art in our city, how we can balance public concern with artistic freedom, the ways in which we might engage in meaningful, constructive dialogue around images that make us uncomfortable, and the methods by which we can make contemporary art more accessible to those who might not regularly engage with it."

She added, "These are not issues with easy answers but witnessing the response to these billboards makes it apparent that they are ever more urgent."

Festival du Bois' musicians grateful 'for the opportunity to perform' during pandemic
Apr 20, 2021 11:00 AM
Comments