When our editorial board first came up with a list of people we thought deserved an award in our inaugural Most Awesome series, Cory Monteith's name came up right away for the Most Awesome Local Celebrity category.
0
Dec 18, 2014 8:30 AM By: V.I.A.

"I first crossed paths with Cory over 10 years ago. I'm a casting director, and my friend had just finished telling me about an enthusiastic young guy she’d met, who was interested in studying acting. I was in the middle of telling her that I didn’t have time in the next few days to meet him, when down the street came a tall, dark haired kid sporting a megawatt smile that could be seen a block away. Within minutes of meeting him I knew there was something special – Cory Monteith had that unique combination of self-effacing charm, fearless drive and street smarts that led me to believe he might have a shot in this notoriously difficult and competitive business. His career followed a trajectory that is the exception, rather than the rule. From small roles to series leads to a starring role on Glee, one of the biggest TV series of the decade, that crucial combination of luck, talent, and timing catapulted Cory to the top. 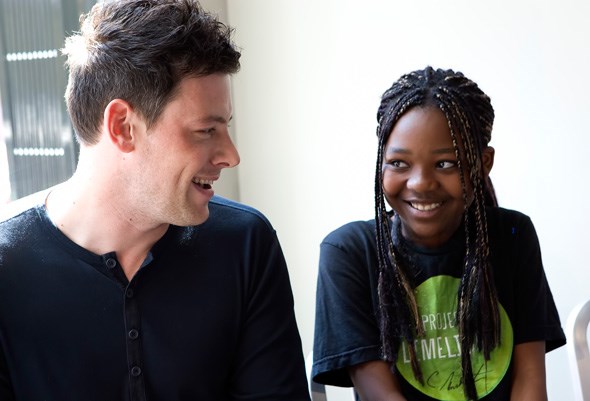 In 2011, when we were in the planning stages of what would become Project Limelight Society, I met with Cory and his longtime manager Elena Kirschner to discuss our vision of a free performing arts program for children. Cory’s vision for Project Limelight shaped much of what it became. Cory donated his time to create a promotional video to help introduce Project Limelight to the world and came back months later, with his friend and mentor Sir Richard Branson, who had previously enlisted Cory to help promote his charity foundation, Virgin Unite. Cory introduced Project Limelight to Branson who donated $26,500 through his Re*Generation Program, which supports at-risk youth across Canada. The two attended a media event at East of Main to help bring focus to Limelight. Cory delivered a beautiful speech to the press, which brought me to tears. The kids were thrilled to perform at the presentation, but mostly they were excited to meet Cory. He spent time with them, signed autographs, and offered words of encouragement. He quickly became a legend to the Limelight participants.

The last time I saw Cory was at East of Main, in July of 2013. He asked if he could meet with Elena and I to discuss how he could further support Project Limelight. It was a wonderful night. We discussed old times and shared many laughs, but mostly we talked about Limelight. He wanted to know what we needed to get through the next year. In his own words, he wanted to be of service. He wanted to be more hands on. Cory had a burning desire to give back and give more of himself. As we said our goodbyes I hugged him hard and reminded him again about the positive impact he’s had on a small group of kids in Vancouver’s DTES.

After his tragic passing, the fans have continued to support the causes that mean the most to him. We are incredibly grateful to the fans, friends and family who have given so generously. Cory loved Vancouver. He loved the Canucks. And he loved Project Limelight. He was a truly great guy, and I’m grateful I got the opportunity to tell him how awesome he was."