Serial entrepreneur JJ Wilson has launched his first fashion brand that does not involve anyone else from his family.
Feb 5, 2019 2:29 PM By: Glen Korstrom

Serial entrepreneur JJ Wilson has launched his first fashion brand that does not involve anyone else from his family.

Wilson’s previous fashion venture was Kit and Ace, which he launched with stepmother Shannon Wilson in July 2014 and expanded to 61 stores around the world by early 2016. Family patriarch Chip Wilson, who became a billionaire by founding Lululemon Athletica Inc., helped finance Kit and Ace’s rapid rise, and then was key in deciding to rapidly retrench. There are now nine Kit and Ace locations. 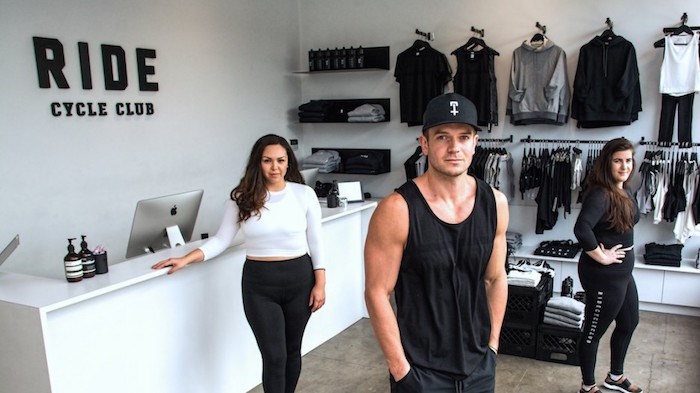 Wilson calls his new fashion line Ride, and its limited collection is available online at his Ride Cycle Club website, as well as in that fitness chain’s outlets in Toronto, North Vancouver, Yaletown and the location that opened in early January, Kitsilano.

“I’m taking a complete opposite approach than what Chip, Shannon and I took with Kit and Ace, where we really expanded and put the pedal to the metal,” he said.

“I’m trying to grow Ride Cycle Club organically, independently, on its own as a business, and not have pressure to expand too quickly. I’d rather focus on the quality of our product, and growing and testing the right new revenue channels.”

He is scouting real estate for more locations in Toronto.

Wilson’s Ride brand includes a range of sweatshirts, T-shirts, pants and shorts designed for men and for women. The womenswear line also includes sports bras made with a stretch nylon fabric.

Made in China, the clothing is designed in Vancouver by Wilson and a team that includes a product developer and Ride Cycle Club instructors.

Clothing sales have generated about 20% of Ride Cycle Club’s overall revenue, and Wilson expects that, by adding his own brand to the company’s clothing line, he will increase that percentage to around 30%.

Until January, the only clothing he sold at the clubs, and online, were products made by Lululemon and Nike (NYSE:NKE) under agreements that gave him the right to put his own brand on the clothing and resell the pieces.

Those co-branded items are no longer on Ride Cycle Club’s website, but Wilson plans to continue selling the items in his spin clubs.

Each of the four Ride Cycle Club locations that he owns with partner Ashley Ander are profitable, he added.

Those clubs are a specialized kind of gym, where participants take classes in which they ride stationary bikes in the dark, staying in sync with each other as club music plays and lighting flickers to create a bit of a nightclub atmosphere.

The trend toward spin clubs has spawned competitors, such as Method Indoor Cycling, Spinco, SoulCycle and Eastwood Cycle Sanctuary.

The clubs are also part of a larger fitness trend of people taking part in prepared classes, instead of independently lifting weights for a while and then jogging on a treadmill for as long as they want.

Large gyms, such as Steve Nash Fitness World & Sports Club, are also offering more classes, including some that have synchronized cycling.

Trevor Linden and business partner Chuck Lawson are part of the trend toward fitness classes, given that they opened their eighth franchised Orangetheory Fitness club, at 2892 Cambie Street, on January 19.

Orangetheory Fitness classes involve workout sets on treadmills, rowing machines and a weight floor. A coach directs the 24-person classes and guides participants, who are all fitted with heart monitors, through different zones, marked with different colours.

Because these fitness centres’ business model is to offer classes, footprints tend to be in the 3,000-square-foot range, which is similar to the size of Wilson’s Ride Cycle Club locations.

Larger gyms such as the Steve Nash ones, or the Club 16 Trevor Linden Fitness Centre & Gyms business that Linden and Lawson also have a stake in, tend to have footprints in the 25,000-square-foot range.

“We’ll probably have four new [Orangetheory Fitness] locations this year, bringing us up to 12,” Linden told Business in Vancouver in January.

“It’s a great product and people love it.”