"He lived for years with an undiagnosed mental health disorder, and turned to drugs as a way to cope, but make no mistake, what really defines Ken is the amazing art he produces every single day." https://www.kickstarter.
Adam Nanji Oct 4, 2017 9:00 AM

"He lived for years with an undiagnosed mental health disorder, and turned to drugs as a way to cope, but make no mistake, what really defines Ken is the amazing art he produces every single day."

Ken Foster once spent his nights sleeping in an alleyway in the DTES. Today, he resides in a small, subsidized SRO with barely room for a cot and a dresser. To survive and to help feed an addiction, he has been hocking his original art on the street for more than twenty years. Author Sean Nosek (Zen for a Crazy World), a former teacher and principal, has lived an entirely different life. 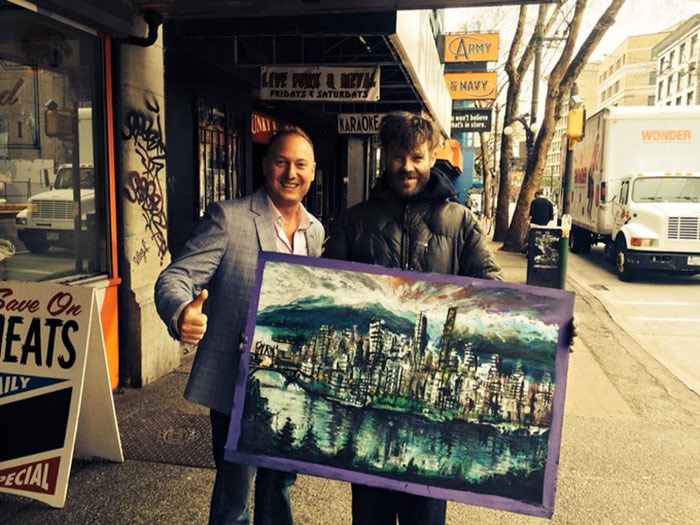 Together, they have launched an unlikely Kickstarter campaign that aims to produce a new coffee table that captures Vancouver's dizzying array of contradicting traits. The book will feature Ken's work, which captures the edgy, distorted and beautiful aspects of Vancouver like no other artist before. In addition to artwork, the book promises to tell the Ken's incredible story.

“He is an extraordinary talent", says Nosek. "He can paint elaborate scenes entirely from memory. He studied at Emily Carr and has been commissioned to do some pretty impressive work over the years.” Foster painted the graffiti for the made in Vancouver Jackie Chan film Rumble in the Bronx, and did some paint work for the Rolling Stones music video Saint of Me."

To learn more, or contribute to Ken and Sean's crowdfunding campaign, visit their Kickstarter page HERE.