This award-winning North Vancouver LEGO artist may soon have one of his custom designs given LEGO’s blessing to be mass produced and retailed.
0
Feb 25, 2019 2:18 PM By: Brent Richter

Now the award-winning North Vancouver LEGO artist may soon have one of his custom designs given LEGO’s blessing to be mass produced and retailed. 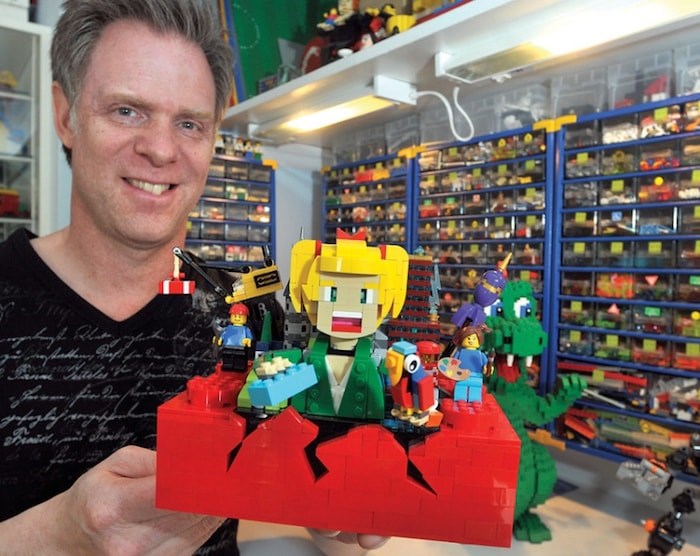 North Vancouver master builder and LEGO artist Paul Hetherington shows off Imagine it! Build it!, his tribute to the Lego brick. The company could soon be producing and selling the model. Photo by Paul McGrath

To celebrate the 60th anniversary of the LEGO brick, the company launched a contest for the Adult Fans of LEGO designer program, which Hetherington is something of a giant in.

Hetherington’s Imagine it! Build it! design is one of 16 selected from around the world for consideration for production and the only Canadian submission on the short list.

“Every kid says ‘Wow, I wish I could make my own LEGO set.’ To have it happen to me is extremely exciting and absolutely a dream come true,” he said.

Other designers on the short-list picked classic designs like Western scenes or fire engines but Hetherington’s piece is a loving tribute to the medium itself.

“I did a more artistic piece. It shows a Lego builder front and centre and then all of the LEGO builder’s ideas kind of bursting out of the brick around it. … Classic LEGO themes like castles, space, trains, adventurers. There’s a little bit in there for everybody,” he said. “I’ve been an avid collector of LEGO for 25 years, so I feel like it’s the perfect idea to put forward. LEGO has been a huge part of my life so I feel like every day I build, I’m celebrating the brick and it’s really opened up my creativity. It’s my main creative tool, if you will, my art supply.”

The feedback from judges in Denmark and the wider LEGO community has been all positive, Hetherington said.

“The people get the concept right away. It’s an ode to creativity,” he said.

The 927-piece set will be sold through BrickLink, an online LEGO parts dealer that professional builders like Hetherington use to feed their habit. If Hetherington can secure 200 pre-orders of his art piece between now and April 15, the company will begin producing and shipping it. Up to 2,500 more of the collectors’ items could be released.

You can see or purchase Imagine it! Build it! as well as the other 15 finalists’ entries in the contest online here.

Imagine it! Build it! is also on display at the LEGO Store in Surrey and Toy Traders in Langley.