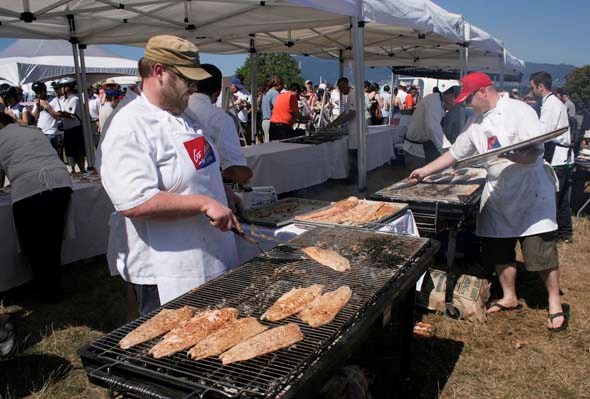 Long-time seafood sustainability advocate and executive chef Robert Clark, will prepare the menu to showcase pink salmon as a delicious and sustainable alternative to other salmon species.

Born in Montreal and raised on the Gaspe Peninsula, Clark’s passion for cooking and the environment was formed at a young age. He grew up cooking in his grandmother’s kitchen and angling along the salmon-rich York River. Through indulging in these childhood pastimes, he learned to appreciate the value of fresh fish and the delicate ecosystem that supports it. Today he is a part of a growing legion of chefs that believe that restaurants have a unique opportunity to help contribute to the environment by educating people about their food choices.

Clark has been instrumental in the creation of the annual Spotted Prawn festival in Vancouver, assisting the Vancouver Aquarium in developing and launching the Ocean Wise program, and has sat on the board of the B.C. Chefs’ Table Society since its beginning. In March 2011, Clark was awarded the Seafood Champion Award from SeaWeb for his oceans advocacy work. Recently, he opened his own sustainable seafood shop called The Fish Counter.

“Our message to the public is that we as consumers have the power to ensure that salmon have a future for us to enjoy,” said Dr. Brian Riddell, president & CEO of the Foundation. “Salmon are a keystone species in British Columbia from a cultural, environmental and economic perspective. Pink salmon, which are expected to be particularly abundant this year in the Fraser River, have the ability to serve as an abundant human food source while also adequately supporting ecosystems that depend on them for survival. Pink salmon can truly be sustainable seafood in practice and not just words.”