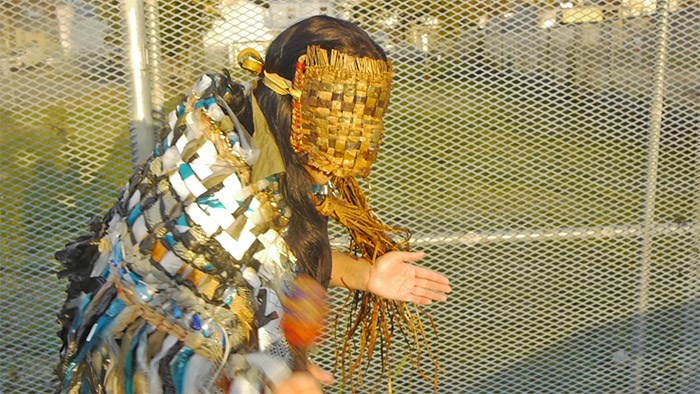 A new exhibition at the Bill Reid Gallery is shining a spotlight on the diversity within Coast Salish art and communities.

The exhibition highlights the diversity within Coast Salish communities, as well as intangible qualities that are often difficult to represent in visual art, says Sharon Fortney, an Indigenous scholar of Klahoose and German ancestry who programmed Intangible with Bill Reid Gallery curator Beth Carter.

“Coast Salish is a really broad term that can be applied to more than 70 communities in Canada and the United States, and you can even extend it broader if you include Interior Salish as well,” says Fortney. The term Salish speaks to an ancestral connection with the language, where a lot of communities speak Salish languages that extend back to a single proto-Salish language, she notes. “There’s an ongoing relationship between communities, but at the same time, each community has their individual identity.”

Intangible aims to highlight the aspects of culture that people don’t see, like “language and the way people think about their culture,” Fortney adds. “I think there’s a sense of, ‘Oh, you’re Coast Salish, you all think alike, you all express yourself the same way.’ That’s just not true.”

While the artists presented in Intangible are rooted in Coast Salish traditions, they’re advancing them in new directions, says Fortney. “I think there’s a sense that you’re not traditional if you use new materials or you use your materials in a different way. I think they’re trying to break some of these stereotypes and raise awareness at the same time, [as well as] an appreciation for the artform.”

To wit, Intangible features previously crafted and new works from six artists: Aaron Nelson-Moody (Tawx’sin Yexwulla), a master jewelry maker of intricate repoussé pieces from the Squamish nation; graphic artist lessLIE (Leslie Sam), who will premiere a new piece entitled Culturally Correct Canuck and also display a print of his critically acclaimed deconstruction of the Starbucks logo; Marvin Oliver, an acclaimed Quinault/Isleta Pueblo sculptor who works in cedar, bronze, steel and glass; hip hop artist Ostwelve (Ronnie Dean Harris), born in the Sto:lo Territory of the Fraser Valley, who will premiere a new video installation “about his journey of self-discovery, thinking about the things his family taught him and the things he’s rediscovering through research about his family,” says Fortney; Tracy Williams (Sesemiya), a Squamish weaver and traditional technologist who Fortney describes as “branching out into a lot of areas of traditional technology that stem from her family’s connection to the land and its resources;” and Roxanne Charles, a member of the Semiahmoo First Nation in Surrey, who will tackle Indigenous women’s issues and the fentanyl crisis in her mixed media and performance piece.

Fortney hopes that visitors to Intangible will come away with “a deeper understanding of Coast Salish, and maybe change their ideas about what is authentic art,” she says. “Cultures change all of the time. Native people are contemporary people.”