Mirik Milan stood before Vancouver city council right around this time last year and spoke to how Amsterdam worked to shed its standing as a “No Fun City.”
0
Jun 28, 2019 11:15 AM By: John Kurucz

Just like Kawhi Leonard, Mirik Milan fancies himself as a fun guy.

As the “night mayor” of Amsterdam from 2012 to 2018, Milan was tasked with bringing fun back to a city that wasn’t having much of it.

He stood before Vancouver city council right around this time last year and spoke to how Amsterdam worked to shed its standing as a “No Fun City.”

“A vibrant nightlife makes sure a lot of young, creative people want to live in our city,” he told council on May 3, 2018.

As “night mayor,” Milan also helped shape and advise policy in the Dutch capital in an effort to bolster arts and culture, cut down on public drunkenness and, perhaps most importantly, retain young people who were flocking to other European cities.

Though no longer Amsterdam’s “Nachtburgemeester,” Milan’s work has had ripple effects across the globe: New York City, Paris, London, Sydney, San Francisco, you name it.

Two years before taking the gig in Amsterdam, Milan began noticing an unsettling trend: people in their 20s and 30s were leaving Holland en masse.

Amsterdam wasn’t fun anymore. The kids were heading elsewhere not only to have a good time, but also to find more lucrative work.

The Amsterdam workarounds Milan listed to council last year were many. He cited the establishment of 24-hour venues outside the city’s core, other venues that were alcohol-free and the advent of multi-use spaces — art galleries, family-friendly programming and co-working spaces all in the same area — to dissuade widespread public drunkenness.

Milan also dropped this nugget of truth from the Dutch experience:

“Small, grassroots venues — this is the lifeline, this is where innovation takes place,” Milan said. “You need to revitalize or innovate the scene from these grassroots little venues. That is always our advice to the mayor of Amsterdam.” 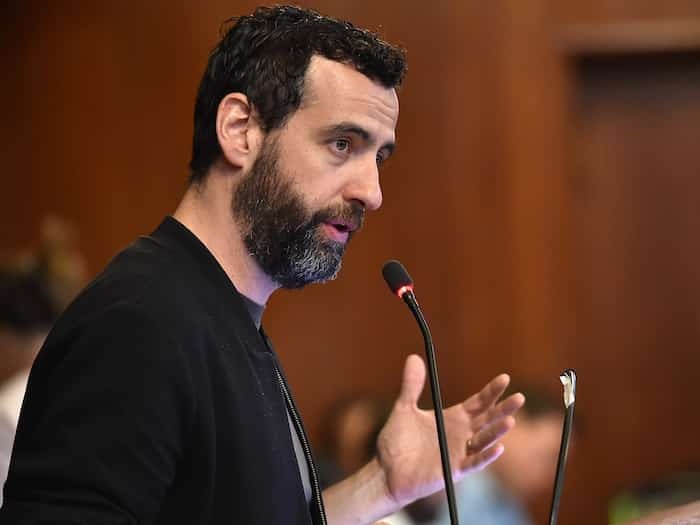 Which brings us to today and Vancouver’s on again, off again tag of “No Fun City.”

Two grassroots venues have recently gone belly up just off the Clark Drive corridor, one of the last bastions of affordable industrial space in Vancouver. Gigs, art shows and all manner of performances ended last weekend at Merge and INDEX, a pair of DIY spaces near the port on Powell Street, which existed for about six years.

According to the head honchos of each space, the end has come by way of renoviction from Low Tide Properties, the property management firm run by former lululemon magnate Chip Wilson.

Nathan Drillot and Patrick Campbell were in charge of INDEX, while Juno-Award winning musician Stephen Lyons ran the show at Merge. By day, each place housed dozens of creatives — photographers, musicians and other artists — and by night, live music and art shows were offered.

Stalled lease negotiations, a lack of communication and rent increases were the death knell for both operations.

“It’s incredibly sad to build this place up over the last six years and see it end,” Campbell said. “We want to open up a new space but we’re going to have to pay triple just to even try and get something equivalent.”

Thousands of art and music shows have happened between the two venues since 2013. Drillot, Lyons and Campbell have roughly 30 years’ worth of collective experience running DIY spaces and the latest closure could be their last kicks at the can.

“We’ve hit a critical mass where there isn’t anywhere else to go,” Drillot said. “We all got gentrified off Main Street, so then everyone starting moving into Strathcona. Now we’re getting gentrified out of here. There isn’t another place to go.” 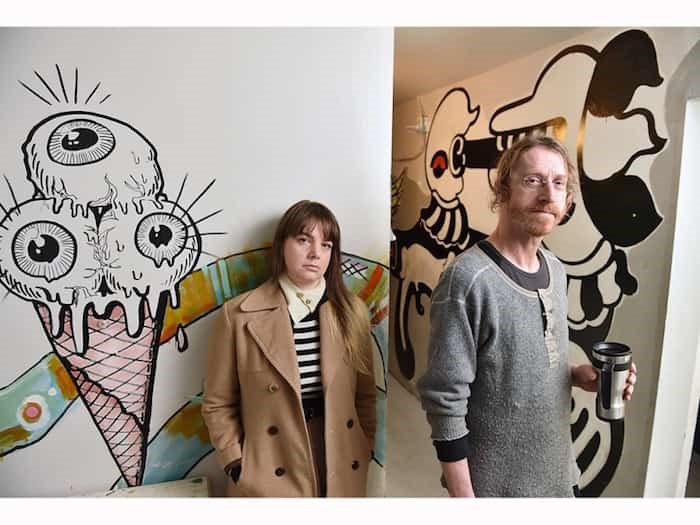 Red Gate Arts Society directors Jim Carrico and his daughter Ana Rose Carrico at the artist space at 855 East Hastings in the spring of 2018. The facility closed May 31, 2018, and has since reopened on Main Street. Photo: Dan Toulgoet

All four venue operators take umbrage with Low Tide marketing itself as being an arts-friendly developer that ultimately displaces members of that same community.

That Wilson has publicly stated the company’s desire to acquire $1.5 billion of property in the city and runs a holding company called “Hold it All” only adds to venue managers’ frustration.

“The most annoying thing about this mass eviction of local culture and community is the incredible hypocrisy of placing ‘culture’ and ‘community’ at the centre of their marketing,” Red Gate Arts Society director Jim Carrico told the Courier by email.

The Courier reached out several times to Low Tide specifically asking for an interview with Wilson or anyone else from the company and received no response.

The loss of musical and cultural space is becoming old hat in Vancouver.

A sharp decline in rehearsal spaces started to become a talking point in the last three years. Venues have been closing consistently since the 2010 Olympics: gone are Richards on Richards, the Columbia, the Media Club the Brickyard and the Picadilly Pub. The Starfish Room and Mesa Luna shut their doors in the early 2000s. The Rio Theatre flirted with closure last year, as did the Fairview Pub and Backstage Lounge.

Even those who make instruments, and command a lot of money for doing so, have been forced out.

A pair of city-led studies two years in the making are looking at those very issues. The Creative City Strategy is focusing on inclusion in the arts, while examining the viability of making a go of it in the creative sectors. The Vancouver Music Strategy is keying in on the gaps in the scene and how musical enclaves can exist in all neighbourhoods across Vancouver.

Both studies are expected to be before council by September with final recommendations. Some of the ideas bounced around in the last two years have included expanding building types — an arts space in a firehall, for example — or developing a land reserve for arts and culture spaces that would be tax exempt.

Coun. Michael Wiebe helped galvanize the Save the Rio campaign last year and is a member of the Vancouver Art House Society. The group’s sole mandate is to preserve arts and culture spaces in the city.

Among the ideas Wiebe and others at the city and province are looking at is creating a new property class that would include a 10-year tax abatement. Organizations that provide arts and culture services would have to prove their commitment to arts and culture over at least a decade in order to qualify for those tax breaks.

“If someone wanted to develop, they would have to pay the benefit they got for every year prior plus a penalty,” Wiebe explained. “It would be very expensive for a developer to develop.”

A good chunk of the Vancouver Art House Society’s work revolves around negotiating leases, looking at an organization’s financials and exploring non-profit or co-op models.

Wiebe also sees a potential workaround in the shifting demographics of Vancouver as they relate to age and wealth. He suggests those who are comfortable financially could opt to invest in cultural institutions rather than buying expensive vehicles or tooling off to Cabo San Lucas.

“I think that’s what our goal is — to find ways to leverage the property so that it’s taken out of the speculation, it’s taken out of this real estate market and it’s kept in this market for arts and cultural spaces, where people can invest in it and continue to ensure that their assets are rich,” Wiebe said.

In the meantime, the city is holding an information session around the Vancouver Music Strategy on June 26. The session runs 6 to 9 p.m. at The Pace, located at 520 Alexander St. More details are online HERE.