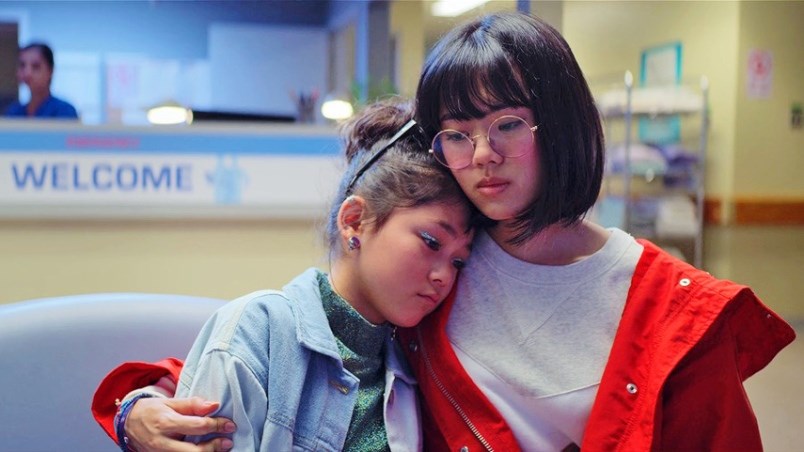 She was too young for the books, but could never be too old for the message.

The show is based off of the popular book series created by author Ann M. Martin in 1986. Anyone who came of age in the 1980s and ’90s will likely remember the popular book series, which featured more than 100 iterations and lined the bookshelves of scores of preteens, for its splendid mix of comedy and friendship with some real life lessons tossed into the mix.

“I think the entrepreneurship element of it is very relevant to the current time,” says Furukawa. “It’s young girls in a position of power.”

The 10-episode first season of the newest TV adaptation, which launched on the streaming service earlier this month, follows the adventures, life lessons and enduring friendship of five middle-schoolers who start a babysitting business in the fictional town of Stoneybrook, Conn.

Furukawa portrays the older sister of Claudia, one of the babysitters.

Although Furukawa, a Carson Graham Secondary graduate, plays a 15 year old in the show, she says her character’s mature demeanor made the task a little easier to pull off for the 21-year-old actor.

“It was a little strange, though I don’t see myself as that much of an adult,” says Furukawa. “In the book, she’s said to be a genius.”

And besides, Furukawa’s already wise beyond her years when it comes to the acting game.

Furukawa recalls growing up how she'd spend countless days on set while accompanying her father who worked in the film industry. Unlike many kids whose first brush with the glories of the stage are felt under the bright lights of the theatre, Furukawa’s first love was always behind the scenes of a film or television set.

“Basically, my dad would take me to set when I was younger. I would see hair and makeup, and the costumes, and see the actors on set. That was what sparked everything for me – I got into film because I loved TV and the movies, but I also loved the making of it,” she says. “I just really wanted to be a part of all of that.”

One of her first times on screen was literally in a Huggies commercial as a youngster, and before leaving high school her first major appearance was a bit-part in the horror-comedy satire The Cabin in the Woods.

“That is actually one of my favourite movies too,” she muses. “It’s become a cult classic.”

Opting to focus on her studies and living the life of a normal teen for the rest of high school, she decided to fully take the plunge into acting after she graduated.

The Baby-Sitters Club had its last adventure in book form in 2000. Netflix’s adaptation of the series has effectively brought the concept into the 21st century, according to Furukawa, who notes the show’s treatment of representation of diverse peoples is to be commended.

“It’s good to see them pursuing, not exactly a career, but a small business on their own and how they’re capable of doing so, as well as the representation that’s seen in the show itself is so phenomenal,” she says.

One particularly noteworthy episode sees Janine and her younger sister Claudia contending with a family emergency. This emergency sees the two Japanese-American characters reflect on the shameful legacy of Japanese internment during the Second World War.

“I don’t understand how someone could that to a family,” Claudia confides in her older sister.

“I don’t understand why they still do,” Janine replies. The reference implicating ICE, mass deportation and migration, as well as growing racial intolerance is clear.

For Furukawa, who was portraying a Japanese-American character and is Japanese-Canadian herself, the scene was particularly impactful. Her grandparents were among the more than 90 per cent of Japanese-Canadians who were interned by the government beginning in 1942.

“It really hit close to home,” she says.

Looking ahead at her career, Furukawa says she’d like to see the fight for more equality and diversity in the film industry continue as it has in recent years.

“When I was growing up I didn’t see too many role models in terms of Asian characters,” she says. “I’d like to be a part of that wave of representation.”

She also wouldn’t say no to an opportunity to play the nosy, intellectual, but compassionate and understanding character of Janine again too.

“If there’s another season of The Baby-Sitters Club I would definitely be interested in that.”