The upcoming North Shore Enjoy Craft Beer Festival might put a bit of fizz back into your life. 🍻
Oct 5, 2020 2:07 PM By: Andy Prest 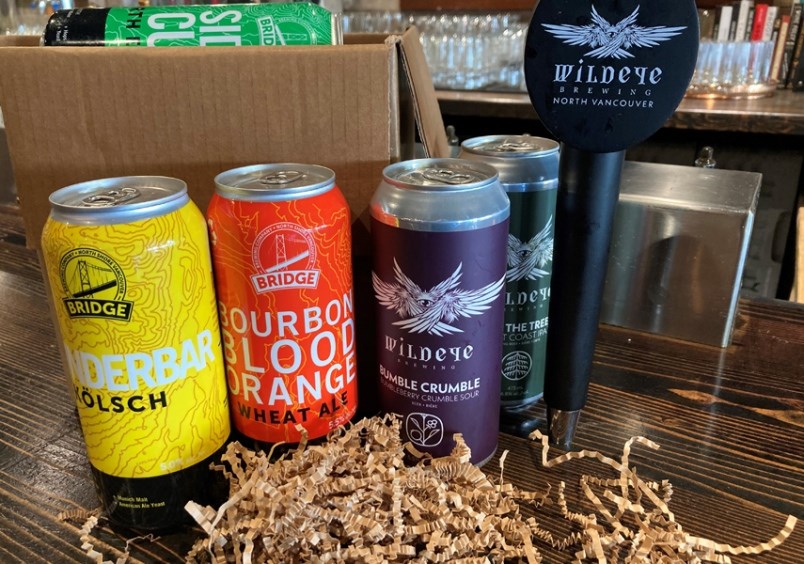 ere are some of the North Shore suds that will be included in the pack being delivered to homes for the upcoming North Shore Enjoy Craft Beer Festival. Photo: Enjoy Craft

Are you missing the thrill of trying a new beer brewed by one of your favourite local brewers?

Or listening to a brewmaster describe how they used a foeder, 80 pounds of B.C. cherries and a hint of pixie dust to get their latest hazy creation to pop just right?

Then the upcoming North Shore Enjoy Craft Beer Festival might help put a bit of that fizz back into your life.

Enjoy Craft, a Vancouver-based company that specializes in events celebrating the blossoming craft beverage scene in Western Canada, has taken the beer festival concept online in the COVID-19 era, and their first target is the exploding craft brewing hot spot of North Vancouver.

Brew connoisseurs across Metro Vancouver can now order a curated box of nine craft beers, all from North Shore breweries, to be delivered to their doorstep for the beer festival. Participating breweries include the likes of North Shore staples Bridge Brewing and Deep Cove Brewing, as well as popular newcomer Wildeye Brewing, among others. The boxes are $59, with proceeds going to St. John Ambulance of British Columbia.

The communal spirit of a beer festival will be created at 5 p.m. on Wednesday, Oct. 7 – officially known as Canadian Beer Day – when a video featuring the breweries and brewmasters who made the beers for the festival will be broadcast on the Enjoy Craft website.

The festival video will be available for anyone to watch, although organizers are hoping that beer lovers will unite in cracking a North Shore brew on Oct. 7 and following along with the show. This is the first online festival hosted by Enjoy Craft, and they chose the North Shore as their first tasting ground because of the area’s blossoming craft beer scene, said event organizer Dallas Robinson.

“The reason I picked the North Shore to start it with is it’s small, it’s condensed, and it’s vibrant,” he said, adding that changes in licencing laws, particularly in the City of North Vancouver’s Lower Lonsdale Brewery District, have helped spur a craft beer boom on the North Shore. “The North Shore is going to start rivalling what they've got with brewers row in Port Moody, they've done such a good job in that community.”

The local brewing community is a tight-knit one that works well together to promote their shared interests, said Robinson.

“These craft producers, they're local, they're small, they're independent,” he said. “These guys all get along, they all help each other.”

The online show won’t have quite the same feel as a live event in which you can sidle up to a head brewer, beer in hand, and start a conversation about fresh hops and the perfect pour, Robinson admitted, but there are also some advantages to being able to enjoy the sample pack without the worry of catching a taxi home or making the last SkyTrain. Beer, in fact, is a perfect product for delivery and home tastings, said Robinson.

“Beer travels well,” he said. “It's smaller than wine, so it samples better.”

The festival show will also include something for cocktail lovers, as the folks from Sons Of Vancouver, a North Vancouver distillery, will pop in to give a lesson in creating a concoction they’ve dubbed the North Shore Martini.

Craft beer lovers need not worry if they are late to the party – the North Shore samplers will be sold throughout October, and the festival show will stay up online on the Enjoy Craft website indefinitely. Festival organizers are also hoping to take the online model to other Lower Mainland locations, featuring a new craft brew haven each month.

"During this time, we could all use a glimmer of normalcy and entertainment to help keep spirits high," Jane Short, the director of community services and fund development St. John Ambulance, stated in a release. "We're thrilled to help create something so unique, safe, and innovative for consumers to support our organization, and help raise the profile of locally owned craft beverage producers."

Have these Vancouver restaurants make Thanksgiving dinner for you
Oct 5, 2020 11:56 AM