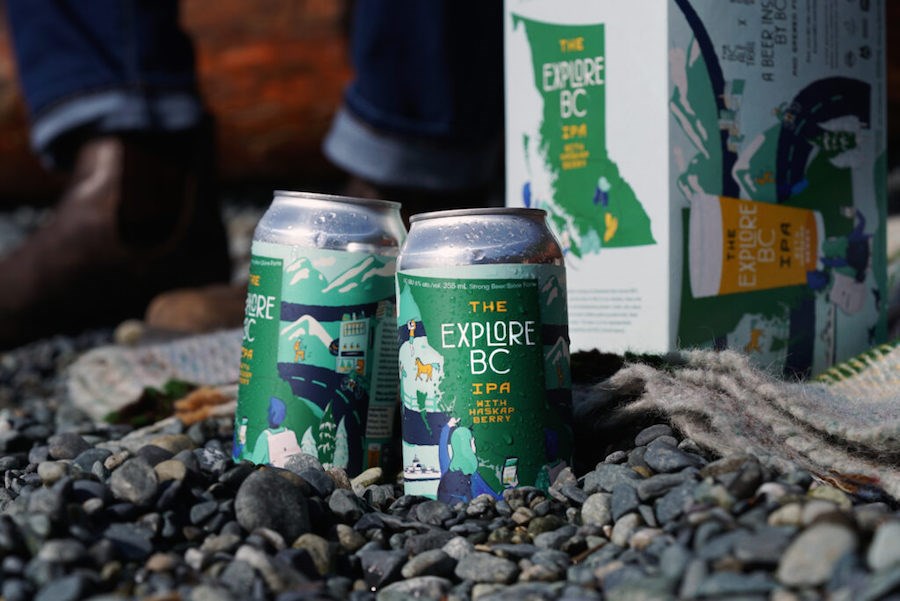 The Explore BC IPA. Photo: BC Ale Trail/DBC

It began, as so many things do these days, with a Zoom meeting.

Brewers from six locations in every corner of British Columbia were banding together to make some good out of a challenging situation, and, in what might be a first for the province, they were going to create a single brew aimed at celebrating the province's craft beer industry and encouraging its drinkers to get out there and explore.

The result: the new limited release Explore BC IPA with haskap berry, now in stores and pouring province-wide.

Released Oct. 1 to mark B.C. Craft Beer Month, the beer is not just the result of the collaboration between its brewers - Wheelhouse Brewing in Prince Rupert; Fernie Brewing; Field House Brewing in Abbotsford; Red Collar Brewing in Kamloops; Bomber Brewing in Vancouver; and Vancouver Island Brewing in Victoria - but it's also the result of a collaboration between the province's tourism marketers Destination BC and the B.C. Ale Trail, the program and app that breaks the province into easy-to-follow self-guided "trails" of regional breweries.

While waiting for B.C. to move into Phase 3 of its "Restart Plan" this spring, Destination BC reached out to Ken Beattie, Executive Director of the BC Craft Brewers Guild and Lead Administrator for the BC Ale Trail, in the hopes they could work together to create something buzzy that would showcase B.C.'s talented brewers as well as tap into the pending uptick in British Columbians travelling around the province in the coming months.

With the brewers - each situated on a different BC Ale Trail - on board, and Vancouver Island Brewing selected as the brew site, the team got to work.

Of course, rather than sit down around a table to talk and taste together, the brewers had to do what we are all doing these days, and get online for their meetings.

Collab beers, however, are not out of the ordinary in the B.C. craft brew scene.

"The ethic in the craft beer world is to work together," said Beattie during a - you guessed it - Zoom meeting and virtual tasting to celebrate the release. "Collaboration is the norm."

Using B.C. ingredients - malted barley from Gambrinus Malting in Armstrong, hops from Bredenhof farms in Abbotsford, and blackberries from the Fraser Valley - there was one additional ingredient in the mix that was definitely not the norm: haskap berries grown in Lumby.

The haskap berry is like a more cylinder-shaped extra tart blueberry. It's also known as the "edible blue honeysuckle," or the "honeyberry." (I first encountered it last year in Quebec, on a road trip through the Eastern Townships, where it's known as "camerise.") This "superfood" berry is growing in popularity across the country, and now it is adding a distinctly fruity and sweet note to the Explore BC IPA, taming to some extent the brew style's hoppiness.

Haskaps did prove to be a hassle, as the brewers at VIB had to get innovative in order to introduce the fruit into the brew without clogging up the works, literally.

The result is a pale magenta beer that opens up to being slighter sweeter the warmer it gets, with that distinctive IPA bitterness mellowed by a gently tart and almost syrupy finish from the fruit. Ideal to pair with robust fall fare - even your Thanksgiving dinner - or a cheese plate with berries or a creamy dessert, the Explore BC IPA is a great intro to IPAs since it doesn't come at you full-throttle with the hops. It's also just a lovely, refreshing sipper on its own; unlike other heavy and dark fall or winter beers, this one is quite light, like an extension of summer.

The single-batch brew is only available until it runs out. Look for the thoughtfully designed box, which points out where the ingredients are from across the province, containing six cans (with charming graphics that show off icons from around B.C.) at government and private liquor stores province-wide. It's also on tap at some brewery taprooms and restaurants around B.C. You'll find a full list of where it's available via the BC Ale Trail site.

The chance to "explore B.C." is certainly here right now, and if you are a beer fan, you can easily use the BC Ale Trail app or site to shape your next brew-venture in our incredible province. The Explore BC IPA is also here right now, but only while supplies last, so get it while you can.

How Ricky Gervais helped fans of a Vancouver beer raise thousands for a special pig
May 5, 2020 10:24 AM