Read All Over -- Aaron Chapman

Read All Over celebrates the bookworm in all of us, showcasing readers in Vancouver and the books they love most. Aaron Chapman is a writer, historian, and musician with a special interest in Vancouver's entertainment history.
0
Nov 21, 2012 9:00 AM By: Liisa Hannus

Aaron Chapman is a writer, historian, and musician with a special interest in Vancouver's entertainment history. Born and raised in Vancouver, he has been a contributor to the Vancouver Courier, the Georgia Straight, and CBC Radio. A graduate of the University of British Columbia, he is also a member of Heritage Vancouver and the Point Roberts Historical Society.

He was one of the founding members of the Vancouver celtic punk band Real McKenzies and since 2001 has been a member of The Town Pants.His latest book is Liquor, Lust, and the Law: The Story of Vancouver's Legendary Penthouse Nightclub (Arsenal Pulp Press).

What are you currently reading? Your thoughts on it?

After much of this year working on my own book, I’m behind in catching up with my reading. I’ve just begun Tragedy at Second Narrows by Eric Jamieson about the Ironworkers Memorial Bridge disaster—the worst industrial accident in Vancouver history. I’ve got Will Birch’s biography of Ian Dury staring back at me on the shelf that’s overdue to read, and I’ve got a stack of old New Yorker magazines to catch up on now, too.

How do you like your books served up best – audio books, graphic novels, used paperbacks, library loaner, e-reader…?

I have yet to buy a Kindle or iPad yet, so I’m still amongst the good old bound paper books. Once I finish the last page of a book I’m reading, I like to throw it against the wall. Stanley Kubrick used to do that when he finished a book and I got into the habit of doing it myself. The nicely bound books I don’t want to damage, and the heavier ones make me mindful of the walls, but I like finishing a book right after the last page by celebrating with that wall thud. I don’t think an iPad can offer me the same reward at present without having a bucket of drywall Spackle always at the ready.

That being said, I bought Nick Cave’s last book The Death of Bunny Munro as an iPhone/iPad app. The app features not only the book itself in text form but also the audio book (read by Cave and featuring music produced by Cave and Bad Seed Warren Ellis that uses an audio spatial mix, specifically designed for listening on headphones and also has video clips of Cave reading from the book.) It’s a completely immersive experience that transcends the limits of what a paper and spine book can be. Considering how many photos, and music are interwoven in Liquor, Lust and The Law I considered producing a similar app for my book but I’ll save that concept for a future book instead.

There are several to choose from but currently it would be John Armstrong. Guilty of Everything was a great memoir of a very interesting time in Vancouver and made me think about my own time in playing in bands in my 20s. His book Wages was terrific. I laughed so hard in sections of it I was gasping for air. I recommend it to everybody. I really admired what John Belshaw and Diane Purvey did with Vancouver Noir as well.

My mother was the writer of a novel, an abstract art book and a legal textbook. As a kid, I watched her as she worked. I also grew up next door to poet and novelist George Bowering. In fact, my bedroom window looked straight over to his writing office. At night, I could see him seated at his desk, typing away. I wish I could tell you I watched him say “Eureka!”, or had music blaring while he wrote that somehow helped feed the muse, but there was no such moment. Mostly I remember looking out the window and seeing him sitting typing. Stopping for a bit, and typing again. So watching other people work I think helped me understand the mechanics of what it took and because there were people around me writing, I thought it was perfectly natural there was a writer in every house.

In terms of a current mentor, for a couple of reasons I would have to say British author and broadcaster Gyles Brandreth. He is better known in the UK than in Canada but I am a great admirer of his. We corresponded during the writing of Liquor, Lust and the Law, and he passed along a few nice pieces of advice, and some of his BBC comedy programmes helped when I needed a break and a laugh. He passed along the story about Mark Twain who, when asked what it took to write a book, said, "Application. Apply the seat of the pants to the seat of the chair." I suppose that reinforced my early memories of seeing others work and write. 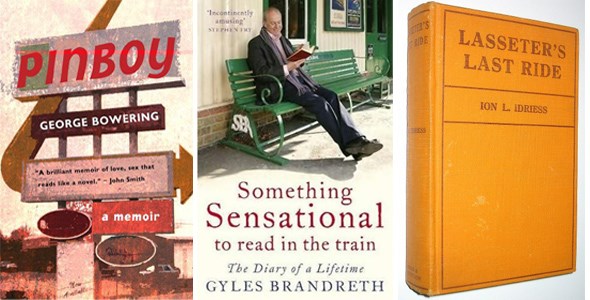 What books have influenced your life the most?

Lasseter's Last Ride by Ion Llewellyn Idriess. It’s about Harold Bell Lasseter who was an Australian explorer who claimed to have found a huge gold mine in the Western Australian outback. In 1930 he had raised enough money to fund an expedition, and set off in search of the mine. After being abandoned as a madman by his crew, he never returned. His remains along with a diary were discovered in 1931. My father read the book and it filled him with a tremendous wanderlust. Its probably the kind of thing that might have captured a lot of young people's minds, but he went the step further and ran away from home in Nanaimo where the family had only a few years earlier immigrated from Newcastle, UK. He gave the book to a friend, and stowed away on a ship bound for Australia where he figured he would find the Lasseter gold. He ended up joining the Australian army when the Second World War broke out and fought in New Guinea, and returned to Canada after the war. I grew up in the long shadow of his exploits. It was like having Indiana Jones for a father, even though by the time I was born he was living the quiet life of a Kerrisdale lawyer. But the fact that he read that book and did what he did inculcated in me the power of a book, and equally gave me a passion for travel, and an interest in history and adventure at the same time.

Sixty-five years after my father handed the book to him, that friend, who he’d long lost touch with and who was living in Chicago, tracked him down. They’d last seen each other when they were boys, and they were now old men, and he returned the copy of the book to my father. It’s a collectable first edition and it sits on my bookshelf now like a family heirloom and amulet, and probably one of the more cherished books in my library. I wish everybody had a book in their life that carried such significance to them and their family. When I read it, it's one book I didn’t throw against the wall.

The launch for Liquor, Lust, and the Law: The Story of Vancouver's Legendary Penthouse Nightclub is tomorrow night at, where else, The Penthouse Nightclub. The event starts at 7 pm but to get in before 9 pm you must contact Arsenal to reserve a ticket. (Details are HERE.) Doors will open after 9pm to folks who aren’t on the guest list and don’t have tix.