Renowned Canadian artist Rodney Graham's first major presentation in Ireland of his work is running currently in Dublin at the Irish Museum of Modern Art, including a piece that shines a light on Vancouver.
0
Feb 9, 2018 9:20 AM By: Lindsay William-Ross

Renowned Canadian artist Rodney Graham's first major presentation in Ireland of his work is running currently in Dublin at the Irish Museum of Modern Art, including a piece that shines a light on Vancouver.

Graham, who is known for being part of the Vancouver School of post-conceptual photography as well as for inserting himself in his work, has created several illuminated light boxes and film works for the exhibit, amusingly titled "That's Not Me." 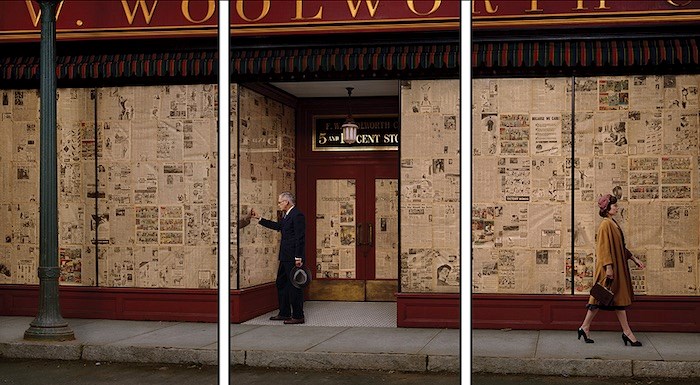 “The Avid Reader” by Rodney Graham

Among the pieces is "The Avid Reader" (2011), which is a set of three light boxes showing a Woolworth's store front with the windows plastered in old copies of what appears to be the Vancouver Sun.

Graham has written about this particular piece and how it came to be:

"The idea for this large triptych came from a scene I witnessed on Main Street in Vancouver: An artist acquaintance of mine reading some old newspapers that had been put up in the window of a shop that was either closing or preparing to open?in any case to prevent the inside of the shop from being seen. I imagined the idea of an avid reader, lets say a compulsive reader even, who reads everything he encounters on the street in sequence. I wanted as well to make an image of two pasts, the more distant past of history and the 'just past' so, having found a collection of newspapers (The Vancouver Sun one of the city’s two main dailies) from 1945?just after the end of the Second World War, and having found a man’s suit in my size from the year of my birth, 1949 (dated by the tailor), I decided to set the piece in Vancouver in 1949 and have it document the protagonist’s (as the actor, my own) encounter with recent history. The building is a Woolworths, the five-and-dime chain ubiquitous in both North America and Britain, and its windows have been covered over (it is either closing or reopening) with the already four-year-old Vancouver newspapers. The avid reader, who has been reading, as one does, from left to right, has just turned the corner into the shop’s glassed vestibule."

The IMMA explains the piece further in their exhibit notes:

"Newspapers and readers feature prominently in Graham’s work, and can be interpreted as an example of his interest in disappearing or obsolete forms of technology, along with an interest in revisiting or reinterpreting historic moments through the media. The newspapers that regularly appear in his photographic works are not just background material, but play a significant part in the interpretation of the works in their dates and content. Included in the exhibition are major film."

"That's Not Me" is at the IMMA until February 18. Graham currently resides in Vancouver. He's a co-owner of Main Street's Liberty Cafe.