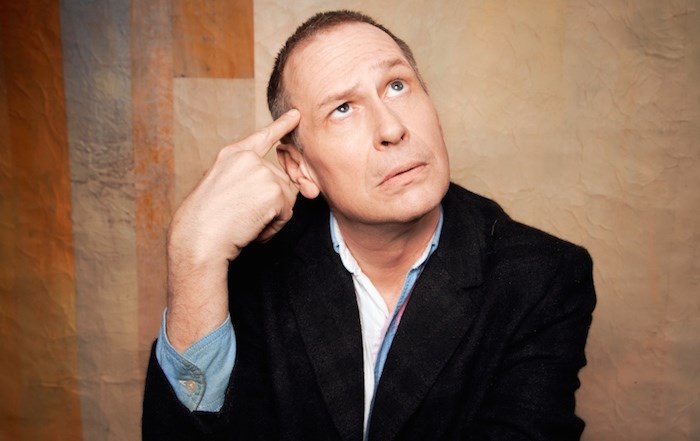 It’s a fitting title should a career-spanning film be made about Scott Thompson.

The laughs he got from telling gay jokes 30 years ago largely came from a place of hate. Gay jokes today make him homophobic.

This, coming from one of Canada’s most high-profile, longstanding gay comedians. The same guy who is one fifth of the Kids in the Hall and had a song called “I’m Gay” in in the troupe’s 1996 film Brain Candy.

“Before, the audiences thought [Cole] was homophobic and they were glad about it,” Thompson tells the Courier from his home in Los Angeles. “Now it’s homophobic and they’re angry. But they’re still all getting it wrong. And honestly, I don’t care if people don’t get it.”

Thompson brings arguably his most famous caricature to Vancouver Sept. 19 to 21 for Après le Déluge: The Buddy Cole Monologues. His 70-minute sets include 11 monologues chronicling Cole’s musings on the world from the period spanning 1995 until now.

The show’s literal translation from French is “after the flood.” Its symbolic translation means far more to Thompson, who is not entirely Cole and vice versa.

“The world changes around Buddy, but he remains unmoveable,” Thompson said. “The theme is that the world is a river and Buddy Cole is a rock in the river and the river has to go around him — because he’s perfect and he’s perfectly placed. And if he causes rapids, so be it.”

Cole is based on a former lover of Thompson’s in the mid-1980s. He was spectacularly effeminate and, in Thompson’s words, had the gayest voice this side of Liberace. It was a revelation for the young comic, who was still reconciling being gay in the midst of the AIDS crisis and having aspirations for Hollywood.

“I found his femininity almost powerful and weaponized in a way,” Thompson said. “He fascinated me and then he died very quickly. He was one of the first to go. Everyone was dying like flies.”

It’s at this point in Thompson’s life that the shell begins to harden. He’s surrounded by death and constantly discriminated against. To this day, Thompson maintains his career would have been more lucrative if he wasn’t gay. He makes a point of mentoring the current crop of gay male comics.

Thompson seems more at peace with those days and, by his own admission, has mellowed considerably.

If the audience gets it, great. If not? He doesn’t care.

To wit, the “Running Fa**ot” bit. The Kids in the Hall performed that sketch in May 2015 at the Queen Elizabeth Theatre and were summarily booed.

So they did it again. At least three or four other times over the course of the evening.

The only bit that got more derision was a jab at the Canucks for not playing hockey at the time — they had lost to Calgary in the first round of the Stanley Cup playoffs.

Thompson says there is no line that can’t be crossed in comedy. He had a Buddy Cole show loosely based around terrorism that included Cole having a relationship with Osama Bin Laden. The show was slated to debut at a club in New York City the week after the 911 terror attacks.

As such, Cole went off into the ether for a few years.

He re-emerges in a time when Jerry Seinfeld and Dave Chappelle have limited patience on placing limits on comedic expression.

Thompson’s “old man yells at cloud” moment goes something like this:

“So many young people are so thin-skinned now, that when they see a person doing a character like this they’re immediately furious because they just assume it’s a straight guy making fun of homosexuals,” Thompson said. “They’re very conditioned to be on the alert for any kind of attack. Quite often it’s young people who are upset with Buddy Cole because they don’t really understand who he is or who I am.”

Who Thompson is now is markedly different than the dude he was in the 1980s when Cole was incubating. The lived experience 30 years later works in Thompson’s favour.

“I think you have to be wittier now, because just the way he moved, talked and dressed got laughs because I think people felt superior to him — over the years it’s changed,” Thompson said. “People don’t look down a character like Buddy Cole reflectively like they did back then.”

The conversation turns to the fate of the Kids in the Hall — they’re not done and something is in the works. Being in the troupe is like being in the mafia, according to Thompson.

“You’re in or you leave in a casket.”

Which begs the questions: How is it that the Kids aren’t in a casket, at least professionally?

“The Kids in the Hall, we were special. We are special. It’s a very un-Canadian thing to say but sometimes things are special,” Thompson said. “We were just very lucky. We were five guys who I think would have had wonderful careers on our own, but the five of us together, something magical happened.”