To celebrate Pride 2016, TELUS is highlighting local leaders in the LGBTQA community who exemplify the power of inclusion and elevate the importance of diversity.
0
Jul 29, 2016 12:56 PM By: V.I.A.

To celebrate Pride 2016, TELUS is highlighting local leaders in the LGBTQA community who exemplify the power of inclusion and elevate the importance of diversity. We are absolutely thrilled to support their #ShareLove campaign and honored to speak with Brandon Yan, the program coordinator at Out In Schools, a non-profit that brings films into classrooms to facilitate dialogue about the reality of LGBTQ youth experience. 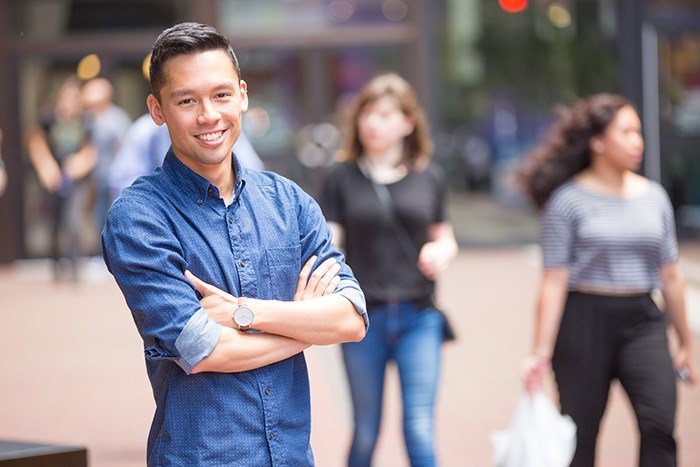 Brandon discussed the difference between urban and rural school environments, his favourite films and so much more:

VIA: Could you tell us about your work with Out In Schools?

Brandon: It is my privilege to serve as the current program coordinator for Out in Schools, a non-profit program that aims to create safer spaces for all BC students to learn in by using independent queer film with facilitated discussion to inform students and educators on the impacts that discrimination toward LGBT2Q+ people has on their school and their communities. Our overarching organizational mission is to illuminate, celebrate, and advance queer lives through film, education, and dialogue.

VIA: Could you speak to the difference between urban and rural school settings that you’ve come across in your work with Out in Schools?

Brandon: As a facilitator, I don’t notice a huge difference in the school environments between a rural and an urban school. However, one huge difference is that rural schools and their students typically have less access to resources (like Out in Schools) so it’s even more important the work we do travel as much as we can all over BC. What usually does make a difference in a school is if their school district has a Sexual Orientation and Gender Identity (SOGI) policy.

Today, 43 of 60 public school districts have passed LGBT or SOGI policies to both protect students and staff and enable LGBT2Q+-inclusive education. B.C. has not yet enacted a similar province-wide policy. As homophobia and transphobia are underlying causes of bullying and systemic in nature, LGBT2Q+ students—particularly trans and gender creative youth—require unique support. There is no mandatory or specified SOGI curriculum in B.C. and we’ve heard many teachers and administrators are not adequately equipped to appropriately and sufficiently support LGBT2Q+ students and there is no mandatory or specified SOGI training for educators in B.C. A SOGI policy strategy can address these needs. For instance, Vancouver has a comprehensive policy while Richmond does not have any policy in place. Last time we were in Richmond their students were trying to advocate to their trustees to step up and have created Safer Schools SD38 to start the discussion.

VIA: Your work revolves around film and storytelling, what’s one film you think everyone should see?

Brandon: Oh, that’s a good one. We show so many great films that it’s hard to choose one. One of the recent additions to our playlist is a film that screened at the Vancouver Queer Film Festival last year called Kumu Hina: A Place in the Middle. It tells the story of a young Native Hawaiian person who’s gender is embraced because their indigenous understanding of gender is more complex that the European-based binary one we are used to today. It tells the story about a resilient indigenous culture resisting colonization which helps us broaden our discussion of LGBT2Q+ issues in classrooms.

VIA: There are many one LGBTQA+ issues that aren’t widely discussed in society, what is one issue you wish would receive more attention to immediately?

Brandon: I think we have to have serious discussions around intersectionality – how do things like race, gender, ability, sexual orientation, etc, intersect?

What I mean by that is we are complex beings and so are our identities and, thus, our lived experiences. I, myself, am half-white and half-Chinese, queer, male, cisgender. I experience things racism and homophobia but also male and cisgender privilege.

What we’ve seen recently is an unwillingness to talk about things like race within the LGBT2Q+ communities. Organizations like Black Lives Matter are important to the queer rights movement and for those of us outside that demographic must stand in solidarity.

VIA: What motivated you to want to “take action”?

Brandon: I think I’ve always been politically motivated. But what made me jump to Out in Schools was that there is a need in our education system to recognize LGBT2Q+ lives as not just places where discrimination and violence happens but to celebrate and embrace them. Until BC’s curriculum does this, there’ll be a need for organizations like Out in Schools to keep up the good work they do.

VIA: If the current you could give your past self one piece of advice, what would it be and why?

Brandon: Recognize and celebrate your difference and learn about your identities and embrace them. Like a lot of kids in Canadian schools, I thought that equality meant being treated equally. I never understood how the queer community could achieve equality when all they did was express their differences. This means, I thought the only way that I would be taken seriously is if I acted as “straight” as possible or as “normal” as possible. For me, this even meant feeling a bit ashamed to be mixed race in a suburban community of mostly white people. I’ve since learned that justice and dignity is something that belongs to all people regardless of how they act, what they wear, and how they identify. I’ve since learned that it’s important to specifically recognize that Out in Schools and Black Lives Matter are important because injustices target specific communities and the solutions need to be targeted, too.

Brandon: Vancouver is awesome because despite significant challenges we face, there’s amazing advocate and activists who are passionately trying to make this city better. These people lift me up and give me so much hope and joy.

VIA: What does the future hold for you and Out In Schools?

Brandon: Hopefully big things. Out in Schools had a record year in 2015/2016. We delivered 136 presentations to over 12,000 youth in 26 school districts across BC. We’re only limited by our funding as we’re hoping to find more resources to do more of this great work this coming year. We’re also hoping to work with our community and with several levels of government to achieve visibility, protection, and inclusion for LGBT2Q+ youth in BC’s education system.

Huge thanks to Brandon for taking the time to share his story. Don’t forget to share your images and messages of love and acceptance through the TELUS #ShareLove campaign. Happy Pride!