To celebrate Pride 2016, TELUS is highlighting local leaders in the LGBTQA community who exemplify the power of inclusion and elevate the importance of diversity.
0
Jul 29, 2016 2:16 PM By: V.I.A.

To celebrate Pride 2016, TELUS is highlighting local leaders in the LGBTQA community who exemplify the power of inclusion and elevate the importance of diversity. We are absolutely thrilled to support their #ShareLove campaign and get to speak with Danny Ramadan, a Volunteer Coordinator at Queer Resource Centre QMUNITY and advocate for LGBTQ refugees. 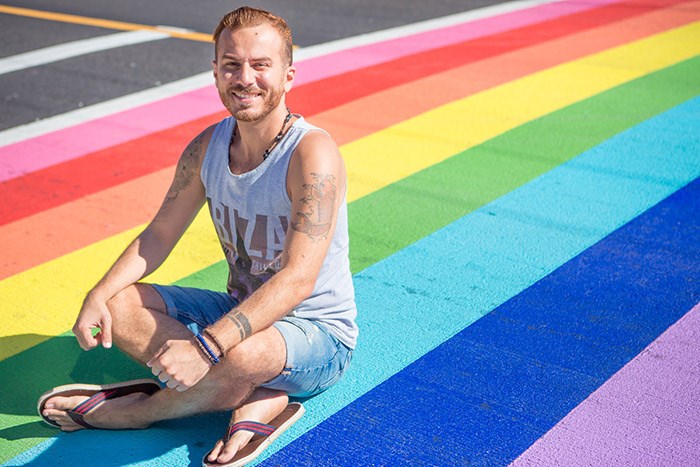 We discussed his experience coming to Canada as a Syrian refuge and how we can all be better allies to the LGBTQA+ community:

VIA: Hello! Could you tell us what QMUNITY is and how you’re involved?

Danny: QMUNITY is BC’s Queer Resource Centre, we aim to support the LGBTQ2+ community of Vancouver and BC with services, education and connections. If you’re coming out of the closet and need someone to talk to, we’re here for you. If you’re a youth struggling with your sexuality and gender identity, come to us. If you’re looking to educate yourself and your coworkers on how to be queer and trans* competent, we’re your destination.

VIA: You arrived in Vancouver in 2014 as a Syrian refuge. What was your first impression of Canada?

Danny: When I arrived to Canada I thought that I know all I need to know about the culture and about the country. I did my research, and saw lots of movies and TV series filmed right here in Vancouver. But real life is never like the movies; I went through a cultural shock as I was trying to adjust to everything around me. I mean, everything I knew and experienced before was back in the Middle East, and everything here is brand new.

Of course, though, I was extremely happy with my ability to represent myself and show my true proud colours here. That has been always my highlight of Canada; I’m free to be as gay as I want to be, and believe me, I can be pretty gay.

VIA: You’ve said in past interviews that in Vancouver, homophobia exists in a “dismissive, polite kind of the way”. In what ways are Syria and Canada different when it comes to the acceptance of LGBTQA+ communities? In what ways are they similar?

Danny: I don’t think Syria and Canada are similar in any way when it comes to the treatment and acceptance of LGBTQA+ communities. The Syrian community is homophobic and transphobic, and it sees homosexuality as an attack on manhood, which is a strong concept back in Syria.

The queer and trans* communities in Canada still experience homophobia in many ways, but we have a voice to speak up, and we have the support of the legislations and the community at large, those homophobic voices are forced to quiet down and become more of a polite dismissiveness to our issues.

Danny: I think people are curious here in Canada; they see me, and they cannot “place” me, they cannot figure out where I am from originally without asking. I identify as a person of colour personally, but I have a light skin tone that makes people wonder and ask questions.

But there should be a clear line in people’s heads between curious questions and invasive ones: curious questions coming from friends or acquaintances are welcomed in the right time and I would always be happy to answer them, but questions around my ethnicity from complete strangers makes me feel disconnected from the society.

VIA: If you could clear up one misconception about refugees what would it be?

Danny: I think the most difficult misconception I hear about refugees is that people only see them as folks living in tents, walking for miles looking for water, or dying of hunger in a desert somewhere. Truth is, many of those refugees are skilled workers, builders, doctors and artists, those are folks who had full lives in their countries of origin, and then were forced by war and destruction to leave those futures behind. We should support them locate a new road here, instead of forcing them to start from scratch one more time.

VIA: How can people be better allies to the LGBTQA+ community?

Danny: I think a lot of people should just listen to us and follow our lead when it comes to fighting homophobia and transphobia and finding our equal space here. We’re the experts on our own challenges and our own abilities and our own stories, so let us tell those stories.

To be a good ally is to be standing right beside us, supporting us, and following our lead. In return, we will be good allies to you with your own struggles, and we will support you, and let you lead, as you will know your struggles way better than we will ever do.

VIA: What motivates your activism and community involvement?

Danny: I think that I’m aware of my privilege: I’m one of the very few Syrian LGBTQA+ refugees who made it out of the Middle East all the way to Canada, I’m one of the very few LGBTQA+ refugees who actually found a job that is suitable to my abilities and to my career aspirations. I’m aware that I’m in a good place, and with that awareness comes the burden of knowing that others who are exactly like me, and deserve exactly what I have, have no access to it.

That’s why I’m motivated to make sure the world knows about our struggles, to sponsor more LGBTQA+ Syrian refugees to join us here, and to help Vancouver become a sanctuary city for LGBTQA+ refugees from around the world.

VIA: You help raise awareness for LGBTQA+ people in other countries and raise funds to help bring LGBTQA+ refugees to Canada, how can people get involved or support this initiative?

Danny: If you’d like to sponsor an LGBTQA+ refugee yourself, all you have to do is get in touch with Rainbow Refugee Society, they are running so many circles at the moment supporting many LGBTQA+ refugees from across the world.

Danny: Vancouver is a growing city, it’s becoming a cosmopolitan city as we speak, what makes it awesome for me is my ability to help shape this city as it takes its rightful spot among the big cities of this side of the world. I’m glad I have the space and place to include my voice as a Syrian queer refugee to the process that makes this city so great… and the amazing seawall, I love the seawall!

Huge thanks to Danny for taking the time to share his story. Don’t forget to share your images and messages of love and acceptance through the TELUS #ShareLove campaign. Happy Pride!