This Vancouver-based artist says Gucci ripped off her jelly sculptures

Sharona Franklin has been making Jell-O sculptures for over a decade. An artist all her life, many of her creations serve as a, 'reclamation of bone.'
0
Nov 8, 2019 9:58 PM By: Elana Shepert 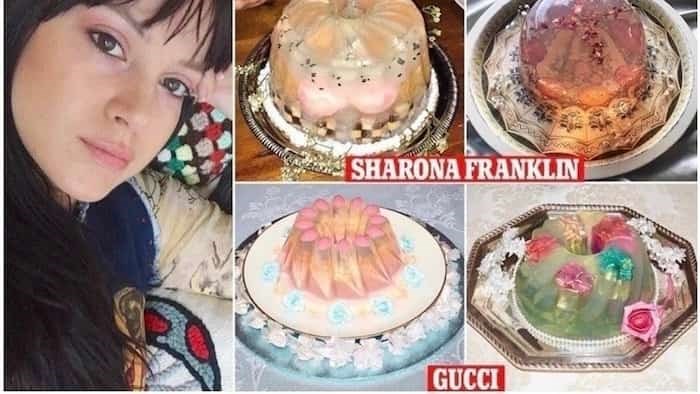 Sharona Franklin has been making Jell-O sculptures for over a decade. An artist all her life, many of her gelatinous creations serve as a, 'reclamation of bone.'

And when the Vancouver-based artist was approached by Gucci to be part of its latest campaign, she was thrilled - but not at first.

"The first time they contacted me I wasn't sure who it was. They sent me a [direct message] on Instagram and I didn't recognize the name," remarks Franklin.

After first contacting her through Simmonds Ltd., a design company based in the United Kingdom, Gucci sent Franklin numerous emails, in addition to a non-disclosure agreement. Following that, the B.C.-born artist was told that she would be flown to Rome for a shoot. However, the company pulled out after she signed the agreement, citing budget constraints.

On Sept. 30, Gucci shared three posts on Instagram that bear a striking resemblance to Franklin's work. The posts each have a Jell-O sculpture decorated with flowers, and one contains inedible, colourful ribbons. In one post, the caption reads, "Elaborate jellies, towering in colour and decoration on plates to be served at the setting of the #GucciCruise20 campaign."

Franklin, 32, relies on social assistance and lives in Vancouver's Downtown Eastside. She has multiple chronic illnesses, and undergoes treatments for them. One of them is juvenile idiopathic arthritis, which she receives daily injections for. She describes how her sculptures reflect treatments for people with her disability.

"I've been creating the Jell-O sculptures since my early twenties, but I've been putting inedible objects into them for the past three years," she says.

"For example, I put chrysanthemum flowers in them, which are used to treat inflammation from arthritis. I've also used medical equipment."

Gucci told The Globe and Mail that they have used jelly sculptures by other artists in past campaigns, and that it undergoes a process with each artist.

Franklin admits that other artists create sculptures out of Jell-O, however, she says hers have a number of distinctive features. For one, she says her flowers arrangements are very unique, as well as her use of soft, pastel colours.

"Gucci sent over so many emails, and I told them how I make the sculptures in a long phone call," she explains. "I told them in an email that I'd need a couple of days in order to make them. They knew what temperature they'd have to be at, and how I layer them."

While they hadn't discussed payment, Franklin says that they told her they were flying her to Italy. In fact, she adds that her friend even took a week off work to come with her, because she would require assistance. Further, she assumed that once she had signed the NDA, they had made a deal.

Since then, Franklin's childhood friend, Sinead Julia Penner, has started a Change.org campaign entitled, "Get GUCCI to make amends with Disabled Creatives and for plagiarizing Sharona!"

The campaign has nearly 4,100 signatures out of the 5,000 goal, and states how, "GUCCI also claims diversity within the #guccichangemakers 2019 diversity campaign yet erases disabled creatives entirely with zero disability representation and has stolen meaningful artwork from a disabled artist."

Franklin adds that she's been using found objects for her creations all of her life. When she was a child, she says she would pick things from the mountains, and find inspiration in her daily life.

"I was really influenced from where I grew up. If I wanted certain things, I had to make them."

Find out more about the Change.org campaign created for Sharona Franklin here.