When hundreds were stranded at ferry terminal, strangers helped one another

Passengers stranded for hours at Swartz Bay terminal Sunday afternoon and evening because of the weather banded together to help each other out, sharing information and arranging rides into town.
0
Feb 12, 2019 2:36 PM By: Louise Dickson

Passengers stranded for hours at Swartz Bay terminal Sunday afternoon and evening because of the weather banded together to help each other out, sharing information and arranging rides into town.

“It was really refreshing to know we all have each other’s backs in that situation,” said University of Victoria nursing student Meghan Calland. “Complete strangers were there for each other, letting us know the best way to get help. It was so Victoria. So Canada. It was very nice to see.”

Calland was on the 3 p.m. ferry from Tsawwassen to Swartz Bay Sunday afternoon. She walked off the ferry with about 50 passengers about 5:10 p.m. and waited for her father Bruce to pick her up.

But traffic wasn’t moving. Cars were stuck on the icy ramp leading to the passenger pickup area.

“Six buses were waiting to get up that ramp,” said Calland. “That’s what the delay was about.”

Then the 4 p.m. ferry arrived and the size of the group grew. And grew further as more ferries arrived.

In the meantime, Calland’s father and many other drivers were stuck in icy gridlock on northbound Highway 17 for about an hour.

“It was super weird. It didn’t seem like there was a lot of support and communication from B.C. Ferries,” said Calland. “The people driving to get us were telling us what to do. It didn’t feel like there was any organization or anyone in charge. It was a complete free-for-all.

“I was okay because I knew my Dad was coming. But you could tell people who were waiting for the bus were calling people. They were stressed. They didn’t know when they were going to get picked up. They were hungry and there were no cars in the lot. It was like Armageddon out there.” 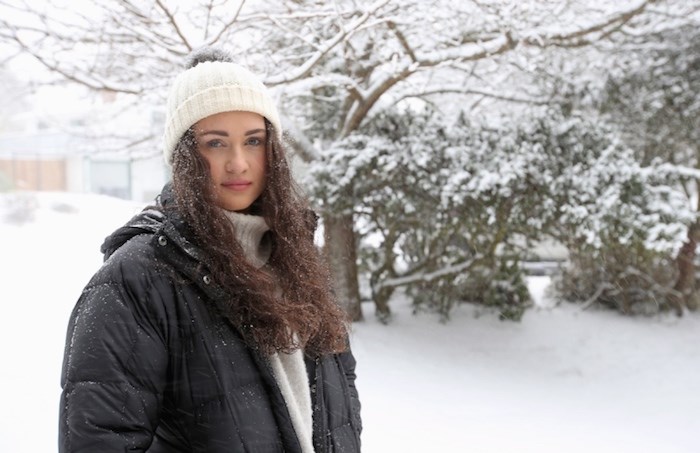 Meghan Calland was among several hundred passengers who were stranded for several hours at Swartz Bay ferry terminal on Sunday. Vehicle access to the terminal became difficult when snow started to fall in the late afternoon. Evening and night service on bus routes 70, 72 and 75 was cancelled. Photo by Adrian Lam/Times Colonist

The situation improved when a driver decided to go through the vehicle toll booth. A B.C. Ferries employee directed her to a group of stranded passengers waiting inside the terminal.

“She said ‘Let all your rides know they can go through the toll booths and they will direct them to the terminal.’ That’s when I called my Dad and told him what to do,” said Calland.

“People were walking in and saying ‘I’ve got two spots left in my car’ or ‘Who needs a ride?’ Everyone was talking amongst each other. They were saying ‘Please, if you can, drive people into town.’ ”

To get to her father’s car, Calland had to step out into the cold with the wind whipping around her face.

“I had to walk from the intersection at the bridge with my suitcase. I was trekking through the snow and I didn’t have proper shoes on.”

As she and her father drove off, she saw people with their suitcases walking on the edge of the highway, trying to get to their rides.

The drive home was grim, with abandoned cars in the ditches and a 30-minute halt on the highway.

Jonathon Dyck, communications manager for B.C. Transit, said the Patricia Bay Highway northbound lanes were closed for a time and buses couldn’t get to Swartz Bay.

“Then the southbound lanes were tied up and delayed significantly because of congestion and other incidents on the roadway,” said Dyck.

“We try as hard as we can to provide service but if the roadways are closed or congested we have to abide by that. I do know that the road reopened eventually, but there were still a number of challenges on the highway so a decision was made to not go to Swartz Bay for the rest of the night.

“We recognize this was a frustrating circumstance for customers coming into Swartz Bay last night and we did let B.C. Ferries know what was happening from our standpoint out on the road. We do know the police were advising against travel as well.”

Because B.C. Transit wasn’t running, B.C. Ferries made announcements on the ferries and in the terminals so passengers could make alternate arrangements, she said.

“There was a fair amount of communication between B.C. Ferries and B.C. Transit,” said Braunschmidt. “There was slow-moving traffic in and out of our terminals. Taxis were able to come in at times.”

Some passenger were stranded until about 1 a.m. before they could get home, she said.

“We completely understand how frustrating this is for our passengers. People were able to stay as late as necessary in our terminal. We wouldn’t close our terminal in any emergency situation. People can stay and be warm as they make those arrangements as necessary.”