This is something that comes along… well, never. World renowned artists Alex Grey & Allyson Grey , whose mystic work reveals universal themes from spirit and soul to love and consciousness, are here this weekend.
0
Apr 27, 2017 5:18 PM By: Do604 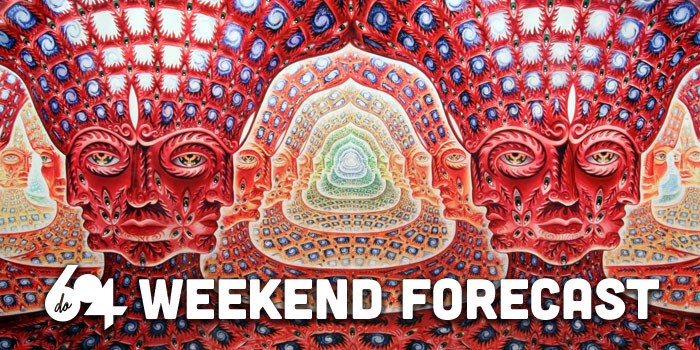 This is something that comes along… well, never. World renowned artists Alex Grey & Allyson Grey, whose mystic work reveals universal themes from spirit and soul to love and consciousness, are here this weekend.

One of the do-not-miss events happening this weekend, as picked by our city’s #knowfun Selectors at Do604.

An aesthetic response to the relationships and exchanges between Native and non-Native communities.

Close Talker with Yes We Mystic at Biltmore

We had happy question time with the headliner of this wicked night of music.

Citizen Jane: Battle For The City at Vancity Theatre

In 1960 Jane Jacobs’s book The Death and Life of Great American Cities sent shockwaves through the architecture and planning worlds.

plus more on Thursday:

Daniel Moir, Jeff Gladstone & The Bad Ideas at The Emerald

Since the early 2000’s, this Brooklyn-based Norwegian singer/songwriter has been wow-ing the world.

House On Fire Comedy at Fortune

Shit Harper Did. Proud of You. If these troupes don’t ring your bells, then don’t you dare miss House On Fire this Friday night.

plus more on Friday:

A program of free events across the city.

plus more on Saturday:

Larissa Tandy at The Cobalt

A series of short films that feature predominately fighting created by members of Vancouver’s stunt community.

The beloved story of mistaken identities is as deliciously hilarious now as it was in Mozart's time.

Chelsea Charlton at The Roxy

Horse Trainer by day, singer-songwriter by night, Chelsea Charlton "Is a Country Song."

plus more on Sunday:

Hair of the Dog Cocktail Competition at The Charles Bar

Have a great weekend checking out these events! You can always head to our Vancouver Events calendar, powered by Do604, for a full list of our recommended things to see and do in Vancouver.