Poster by Jeannette Langmead Roll up! Roll up! The circus is back in town with giggles and guffaws for all. Next Thursday (Sept.
0
Aug 27, 2015 11:45 AM By: Janelle Lam 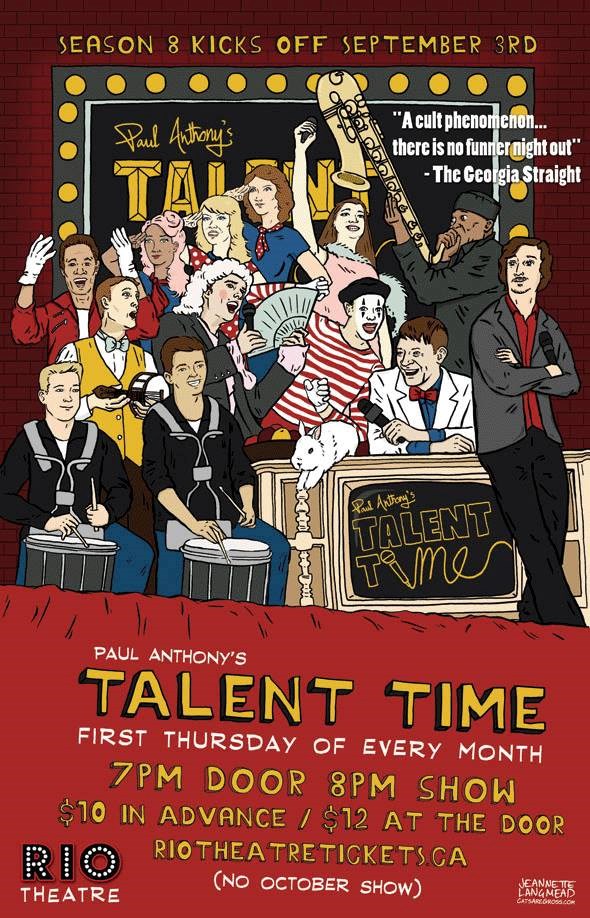 Roll up!  Roll up!  The circus is back in town with giggles and guffaws for all.  Next Thursday (Sept. 3), Paul Anthony’s Talent Time will be returning to the Rio Theatre for its eighth season hosting an eclectic bill of singers, dancers, jokesters, and four-legged performers.  If you’re looking to have a quiet, predictable evening, this is not the show for you.

Since its inception in 2008, Talent Time has become something of a cult phenomenon, drawing a loyal audience and many entertaining acts.  Kicking off this season will be the Cindy Yang Dance Academy; comedian Chris James, who won runner-up at the Just For Laughs Homegrown Competition; and DramaNatrix, with a special peek at their 1920’s off-Broadway musical, The It Girl.  Returning talents include eight-year-old Angel Rj Lumayag, who recently won Vancouver’s Chinatown Idol and Gary Oliver of Cinemazoo, with his amazing animal acts.  Last time Gary was on the show, he brought flying squirrels who soared over the audience and a chihuahua who rode on the back of a tortoise!