The Opening — Ben Skinner: Colouring Outside and Reading Between

When I meet Ben Skinner , he and Back Gallery Project proprietor Monica Reyes are debating the pros and cons of leaving the mechanism of his ascending-Crayola-infinity-mirror exposed or concealed.
Jun 17, 2014 9:35 AM By: Alex Quicho

When I meet Ben Skinner, he and Back Gallery Project proprietor Monica Reyes are debating the pros and cons of leaving the mechanism of his ascending-Crayola-infinity-mirror exposed or concealed. His manner, improbably, is at once both deeply serious and exuberantly joyful. Thinking hard, his brow furrows over his oversize glasses before his face opens suddenly into a new idea's delight. It’s a microcosm of character that I see mirrored in the responses of viewers who cram into his opening reception the Thursday evening after our meeting.  (“I get it,” a friend tipsily exclaims, after examining his patterned snack diptych. “Cheetos are the exact opposite of pickles!”) 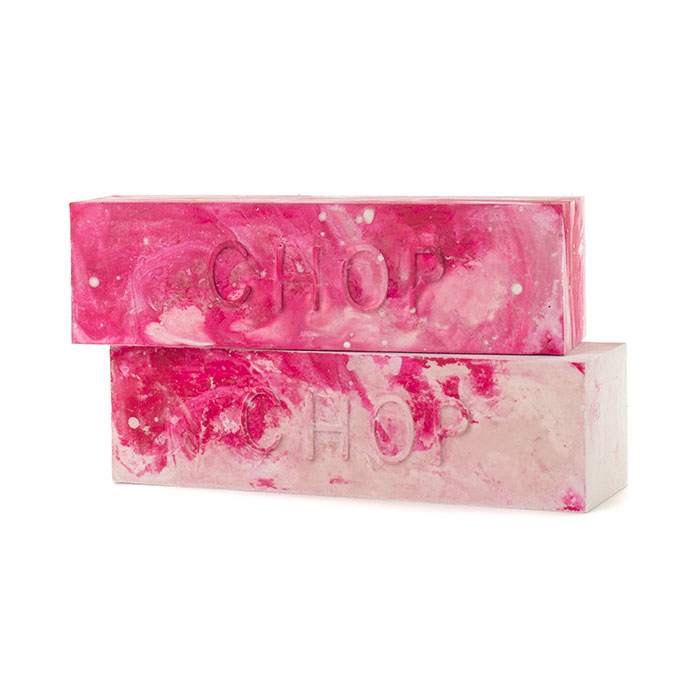 It’s the colour that first strikes people, used maximally and in pleasing arrangements; then it’s the cleverness and the finishing — the satisfaction of seeing a project seen through to highly detailed completion. The Back Gallery is stuffed to the brim with his crisp objects: words cast in plaster, words printed on Plexiglass, the aforementioned food paintings, pencil crayons and coloured paper and a single luminous barber’s pole, striped unexpectedly in an iridescent pink and green.

Skinner’s alchemic grasp of colour reminds me of abstract expressionist Barnett Newman, best known for his zips and fields of expansive paint — explorations, as Skinner’s work is, of colour's emotional resonance. Skinner isn’t afraid of red, nor yellow, nor blue.  In speaking, he is quick to flit to remembered touchstones, tangible places outside of the work that are often from childhood, when the experience of hue and material is always startlingly new. An entire wall in the gallery is papered with the speckled black-and-white patterning from Skinner’s high school composition books. Glib double-phrases (“there there”, “now now”, “wink wink”) cast in rectangles of pastel plaster sit against it, neatly encapsulating Skinner’s playful fixation with pattern and language, colour and form.

“I have a fascination with language and the poetic nature of phrases and words,” he says. “I [collect] these short poems and phrases and lists. Sometimes it’s social, where I overhear something that somebody’s said. Sometimes I mishear it, or I take it and twist it up. I like to reframe phrases that we hear all the time.”

Case in point: a slick half-pyramid in gold leaf and clear Lucite that states, I was all, and he was all, and they were all that can be mistaken for an existential hippie mantra before one clues in to the Valley Girl lilt (I was all, like, no way, seriously?). This highly-polished flip of the inane into the profound is what Skinner is best known for, bringing to mind his 2011 series of phrasal tondos that reached jokey lines such as you were nice while I lasted beyond sheer sloganism.

In a nod to Newman, or not (Skinner’s work is fresh enough to slough off the musk of art history), Skinner has a colour field of his own: a rainbow swathe of pencil crayons set meticulously, point-up, into a rectangular bed. It’s complemented by a large, framed grid of Color-aid swatches that Skinner fearlessly demonstrates can be lifted out and moved around. He cites middle-American highway signs — those moveable block-letter announcements of daily specials and Christ Our Savior and No Vacancy — as an inspiration, making me think of the great democracy of his obsessions. Highbrow or highway, art or design, Skinner fixes his unwavering attentions on all of it, equally, and pulls it all together into pure retinal delight.

At the end of our little tour, Skinner and I stand before Blue Boy, a paint-by-numbers that he had completed and then painstakingly reversed. If we stare at the negative for long enough, I wonder, would we see it turned positive again? Skinner is eager to try it — he hadn’t yet — and stands motionless and unblinking, big eyes drinking in the vibratory inversion of his work. This goes on for a minute. Then he darts his gaze to the blank wall on his left.

“Oh my god!” He exclaims, excited as a child. “It works! It really works!”

Get in touch with Ben Skinner.

Ben Skinner's Colouring Outside and Reading Between runs until June 28th at the Back Gallery Project (602 E Hastings).