Tavi Parusel arrived on the first day of Capilano’s Documentary Film Program as the youngest student in our class but immediately impressed his peers and instructors with his grand ideas of making the world a better place through his art. Since graduating in the summer of 2009, Tavi has worked on a research ship up the coast of British Columbia, travelled to India to document the Kumbha Mela and most recently walked over 900km of the Camino de Santiago in Northern Spain.

At just 22 years old, I can not only say that this impressive lad is a good friend of mine, but also a constant reminder of what it means to live a life dedicated to your art. I had the distinct pleasure of sitting down with him last week to discuss what he’s worked on since crossing the stage at Capilano (* Tavi actually wasn’t present for our commencement because he was already working as a Videographer for Living Oceans, aboard their research ship headed for Haida Gawaii). 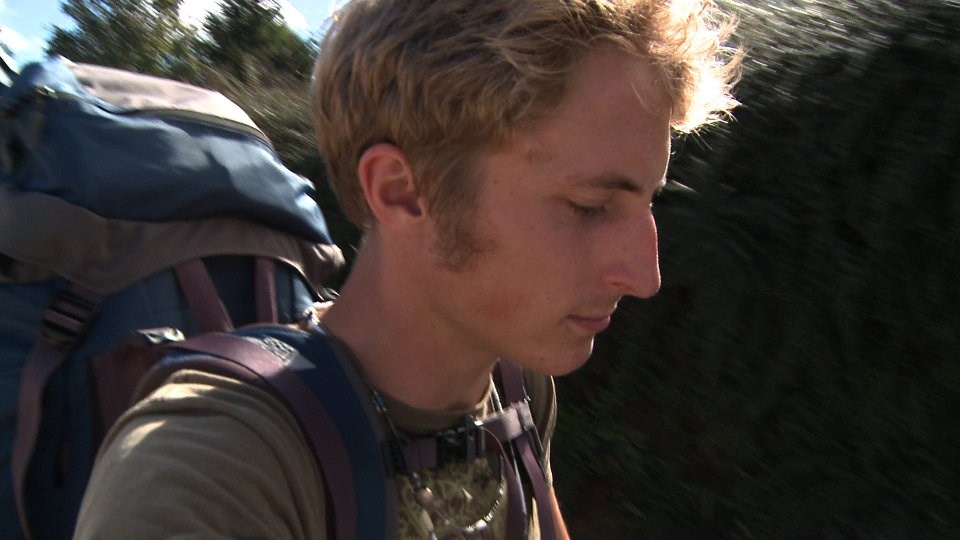 How did you come to be interested in documentaries?

When I was younger I used to love watching documentaries; I loved seeing all these interesting stories that were real, I mean you didn’t have to go to fiction to see a good film, these were true stories. But, I guess it was my grade twelve year of high school. I mean, I had always been interested in film and had grown up acting, so the interest in film as an art form was always there; but documentaries didn’t enter the picture until I had to do a year long project involving a presentation of an artistic component. I had taken on religion as my topic and for my artistic component I did a documentary looking at the overlapping of different (and often feuding) religions. So that really got the ball rolling in terms of getting interested in pursuing documentary filmmaking beyond the project, and after I graduated, I went straight to Capilano and haven’t really looked back since.

What is it you like about documentary as a story form?

Sharing an experience with people who may have never seen or experienced it otherwise. I think that’s what is so great about documentaries; we can go to these crazy places and meet these people who are completely different from us, yet we can relate because we’re all people. There’s a sense of bringing people together and making a great big world feel a little bit smaller, that I really like about making (and watching) docs. I can show you this part of the world, and through film, we can share in this experience that only a few people would have otherwise had. We’re all so different and unique and each person has all these different stories to tell, and documentaries give us the opportunity to tell them, or at least begin to tell them.

What do you look for when you’re starting a project?

There’s no specific... One thing. Just an idea that gets me excited right off the bat, something that I hear or think of and immediately feel the hair on the back of my neck stand up, or gets me really stoked, that’s what I look for. Without having to think about it, there’s something coming up fro inside rather than working for the idea from the outside and thinking about it too much. I mean, I have no idea why I would have been excited to walk 900km across a country, but as soon as {my brother} mentioned it, I knew I wanted to do it, I didn’t have to think about it.

Where do you think you get your inspiration?

I think I get a lot of inspiration through my friends and family, just sharing ideas and talking about the things that excite and intrigue us. Definitely travel plays a big part in my life, I was bitten hard by the travel bug and the majority of my films have revolved around the opportunity to take my craft on the road. There’s just something about being away from home and having the freedom to express yourself any way you want that travel allows and I just love so much. And getting to see different sides of the world and gain perspective on different ways of life that we wouldn’t see at home.

What’s the coolest thing you’ve gotten to do as a filmmaker?

I think it was right off the bat after graduating from Cap, I got invited to go on a three week trip up the coast of BC doing research-based videography for Living Oceans. One day me and the other videographer were able to go down in one of the little submarines to 700ft and cruise around on the ocean floor. That was the definition of a ‘once in a lifetime opportunity.’ And just a week or two after graduating from film school, no less. I mean, everything that I’ve gotten to do, and see as a filmmaker has been great, but spending an afternoon 700ft below the ocean surface was certainly a highlight.

Living Oceans wanted to do weekly webisodes on the journey and research they were gathering along the way as they looked into the impact of bottom-trolling on deep sea coral systems, and I was logging footage and editing for them while living on this ship for three weeks cruising up the coast of BC and Alaska. It also lead to a year of work with LO, which was great because it allowed me to delve deeper into my appreciation for environmental work.

As a spiritual person, do you find that no matter the subject matter, your films reflect your beliefs and way of life?

For sure, I mean, every filmmaker puts themselves into their films whether it’s intentional or not, there’s some essence of you because you’re playing God with the footage. While I’d never sit down and intend to tell my audience what to think, my films are going to speak for me in how I’ve put them together.

Has Vancouver shaped you as a filmmaker?

Definitely, I mean before I lived in Van, we were up in 100 Mile House so the options for venturing into film were... Limited, to say the least. After moving here, I was able to explore my options a bit more and living here has allowed me to be the artist I want to be; it’s a great city like that.

A lot of your short-form work has married the forms of film and music, how important is the crossover between music and film for you as an artist?

Super important. For me, what I love about film so much is how you can express yourself using so many different art forms in one complete package. And I have strong roots in music, I mean, up until nearly my final year of high school, I thought I was going to be a musician professionally. So music has a hold of me as much as film, and I love bringing the two together. I almost feel sometimes like my projects don’t exist without the music to accompany them, it doesn’t seem complete without a good soundtrack. There is no better feeling than putting the right track under your footage and seeing it compliment one another and bring it to a whole other level.

So describe your current project, The Pilgrimage: A Tale of the Camino de Santiago?

Well, the Camino de Santiago is the ancient pilgrimage route to the Cathedral of Santiago de Compostela in Galicia in northwestern Spain, and every year nearly a hundred thousand people attempt portions and the entirety of the trek. The idea for the film started in the Spring of 2010 when I heard my older brother, Eolo talking about it, because our cousin had done it a few years ago. And I think Eolo was fully intending on doing it alone, but as soon as he mentioned it to me and I had that gut reaction I was talking about earlier, I knew that this was something I wanted to do, and experience; I didn’t know why, I just wanted to be a part of it.

I was finishing up work with Living Oceans, and I had just bought my camera, so I thought, “why don’t I bring my camera and film the Camino?” so there wasn’t a whole lot of planning that went into what kind of story we’d get out of it, we figured we could just go and film it and figure it out along the way. We started in St. John in France, and had no idea what we were getting ourselves into, but the moment you realize that you are in over your head it’s too late to back out and you just have to start experiencing it. We discovered over and over again, this reoccurring metaphor of the camino to life. I went into it with a lot of preconceived notions of what it would be like, and I really underestimated how difficult it would be, but it was much harder than I thought, walking day in, day out for five weeks straight; I mean, 20-30km is taking alone, plus the weight of our packs, it was brutal at times.

And then there’s a toss up when you’re trying to experience something yourself, and trying to decide when to film for the sake of the project. That was a really difficult decision each time, because as soon as you pull out a camera, people’s behaviour changes, and you immediately become removed because there’s a camera between you and the moment and you’re thinking about editing and post and you’re no longer just in the experience. So unfortunately for the film, when those moments came along and we had to make those decisions, nine times out of ten, we chose to just experience it...

But the film doesn’t suffer from a lack of footage, or feel as though the filmmaker sacrificed filming for the experience, it’s still a firsthand account and experience of the incredible and often grueling trek the brothers took across northern Spain in search of whatever it is people go looking for when they sign up for a pilgrimage in 2012: peace, quiet, an escape from the hustle and bustle of modern life, and maybe a life lesson or two from strangers along the way.