He might not be from Vancouver, or currently call the west coast home, but Stephen Low's new film Rocky Mountain Express depicts the grueling construction of the Canadian Pacific Railway from Hope to Calgary, and I had the opportunity to talk to Stephen last week before the Vancouver screening to talk trains, his father's career and why Hollywood is phony.

If Stephen Low had been in your class at film school, he would have been the Meredith Grey of film school. His father, Colin Low, was not only involved, he was heavily influential in the bourgeoning Canadian film landscape of the 50s and 60s and Stephen was often dragged along to hang out on location, much to his chagrin.

“I remember it being boring. For a little kid, being stuck for hours while they set up lights and cameras and everything, that’s not where I wanted to be; and I certainly wasn’t keen on becoming a filmmaker after getting the taste that I did growing up.” 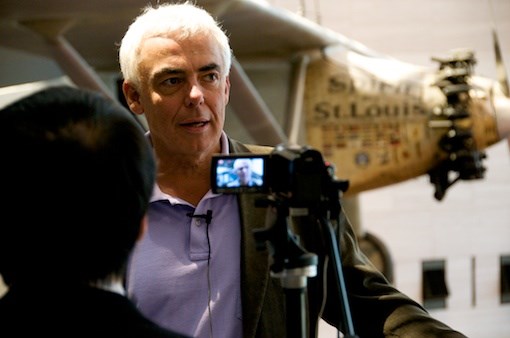 Despite his waning interest, Stephen gained a world class education in documentary filmmaking before heading to university and pursuing a more conventional education in Political Science at Lakehead University in Thunder Bay. He paid his way through an undergrad by working summers on the railway in Northern Ontario, strengthening an already powerful appetite he had for steam engines. But it wasn’t until grunt work ran its course and Low found his passion for all things new and exciting that making movies presented itself as a possible career choice again.

“It wasn’t until I grew up and saw more of the world that I decided I was interested in making movies. I was looking for something other than labour opportunities, and I had all these ideas for films that I wanted to make. I was unemployed, sitting on a park bench in Montreal and I read an article in the Globe and Mail about a Canadian airplane company that had sold all these planes that weren’t built. So I reached into my pocket, pulled out a quarter and called up Canada Air and when the young PR guy answered I just blurted out “You guys need to make a film about this!” He had no idea what he was getting into but he said “Sure, c’mon by.” And from there it was just one things after another.”

This stroke of luck wasn’t Low’s first attempt at working in film, though. He’d been on several sets for big budget Hollywood films working with esteemed directors like Terrence Malik, but hated the pecking order and bloated self-worth of people in the business of pretending.

“I realized that I liked real people rather than actors, that was about it. I wanted to work with the people that these stories based on real events were written about, and to do that, I had to get away from fiction film and go back to documentaries. I wanted to use the license that filmmaking {and journalism} gives you, if you call someone up and tell them that you’re making a film with the NFB (National Film Board), all of a sudden you’re in the door. It’s like having a skeleton key. I mean, because of filmmaking I’ve been to the bottom of the ocean, flown in fighter jets, seen the sunken Titanic; James Cameron hasn’t even done that! And I know that my friends and colleagues, while they may not be famous, are the real deal, they’re the people famous actors will play in the made for TV movies; and I prefer it that way.”

Stephen’s motivation for making films is clear in the work itself; he got into making movies because he was interested in the world, and since launching his documentary career he’s satisfied his curiosity on over a dozen topics ranging from beavers to the Indy 500, from Mark Twain to the Titanic. Most of which filmed for the IMAX experience. Stephen credits his love for perfectionists like David Lean (Lawrence of Arabia) for what would later become his eye for detail in filmmaking.

“Guys like David Lean, working on fiction films have it easy, that is to say, if something doesn’t work, they can manipulate their environment to make it work. For me, it doesn’t matter how much preparation I do before going into a shoot, if the natural elements don’t comply, I have to be flexible and able to roll with the proverbial punches during production, because {in the case of The Rocky Mountain Express} once that train starts moving, I’m not in control anymore. That being said, I love taking the time to make sure I get exactly what I want out of every shot. I worked closely with cinematographers when I was working on Hollywood films and it really instilled the importance of each frame, and I really enjoy applying what I learned in Hollywood and big budget films to documentaries. Just because they’re informational doesn’t mean they can’t be visually exciting.”

Of course, not everything Stephen learned about filmmaking came from Hollywood, lest we forget his father’s influence.

“I loved the early days of the film board, they did such lovely films in the early 50s and 60s; in fact they kind of invented the art of the poetic single character film, prior to that, documentaries had been informational, lacking a personal narrative, but the NFB (and my father’s colleagues) revolutionized the character-driven documentary. That body of work convinced me that documentaries could be better than fiction films. And I learned everything I needed to know about filmmaking from working with my dad, you know, character in conflict; there has to be a struggle and a resolution, that was ingrained in me from a young young age, and mostly without my realizing it at the time.”

Low’s latest project is an engaging look at the construction of the Canadian Pacific Railway, more specifically, the more than challenging section from the Fraser Canyon to the eastern slope of the Rocky Mountains. A project in the hands of American dirt-farmer William Van Horne, and a feat in railway engineering. The film focuses on the most harrowing portions of the construction, when the project moved at the crawling pace of just five feet per day and at a cost of six lives for every mile of completed track.

A long time coming, this film has been a passion project of Low’s for some fifty years; and he doesn’t just talk about trains, he waxes nostalgic like a bleeding-heart romantic about the first time he set foot in the roundhouse in Ottawa.

“Everyone has their main passion, and then sub-passions, if you will, and trains are my thing. As a little kid, going to the roundhouse, I’d see these monsters in each stall, like living breathing beasts. The smells in there were great, the steam and smoke, grease and fire all hanging in the dark, there’s an element of evil that is so exciting as a kid. And I definitely got motivation, while filming, when kids would come out to the tracks to see the reanimated Empress at each stop. It reminded me of being that age and seeing it for the first time, and you could see in their faces that this was going to ruin them, because the chances are they won’t get another chance to see something like that; when the steam rises 200 feet into the cold morning air and the engine begins to pump like an enormous beating heart. I just hope this film can give them a similar experience.”

This film delivers with the power of, well, a Hudson steam engine. Stephen and his crew mounted cameras and microphones on every possible moving part to capture the power and speed of the Empress, taking the audience on a ride unlike anything we’d ever see from a car or plane through the Rockies. This isn’t just redoubtable footage, this is locomotive porn (the tasteful kind, of course) for anyone who has stood just close enough to feel the rumble of the driving wheels push aggressively over steel tracks, or watched a hundred-foot steam cloud disperse lazily into a cold wind.

The Canadian Pacific Railway turns 126 this year and while now people prefer driving to the time consuming and sometimes crowded method of railway travel, in 1885 two ends of a nation were finally connected and ultimately unified thanks to the efforts and lives dedicated to the building of the railway, this film isn’t just a fine piece of Canadian history, or the first IMAX film about an entirely Canadian topic (it is), it’s a flag-flying pride-rousing film about the real-life little engine that could.