“Comedy is tragedy plus time.” It’s been said many times by many comedians. I believe the original usage dates back to the great Carol Burnett.
0
Sep 15, 2010 11:00 AM By: Graham Clark

It was just the other night when I was watching the Hero show at the China Cloud when I remembered the distance Cam MacLeod will go for a joke.  On this particular night he was playing a street cheese seller, a man who had “cheddah”. He produced all sorts of cheese from the many pockets in his jacket, about 30 dollars worth in all. When you’re working in live comedy and the payment can often consist of two drinks, 30 dollars for a joke is no small feat.

It was during this character piece that I cast my mind back to seeing Cam on this same stage many months before when he had somehow got a hold of a door to use as part of a set. Most of the bit was Cam yelling through the door. It was getting steady laughs until he smashed through the door with an axe. The entire sketch couldn’t have been more than five minutes long, but I can only imagine the set up time required for this gag was cumbersome. It’s commitment to a joke that is seldom seen in the DIY world of comedy.

MacLeod’s commitment to the laugh is demonstrated numerous times by the absurd lengths he would go to in the videos he produced with the group Manhussy (I recommend the sketch Big Bites). It can also be found online in the form of the website http://jetskingking.com/ which serves as a ludicrous extension of the character he played in the wonderful online comedy Mental Beast.

This commitment to humor has manifested itself not only onstage but also behind the scenes. Cam helps run the China Cloud theatre as well as being the comedy curator for the Olio festival. Though it’s only in it’s second year, it has grown a legion of fans and is showing its potential to become a place to see what’s new and exciting in the world of music, art and comedy. If Cam maintains his involvement, I can only imagine it’s the second year of many.

If you’d like to learn more, you can go to http://www.oliofestival.com/

Cam took a pause from his hectic schedule to answer some questions for Vancouver Is Awesome. 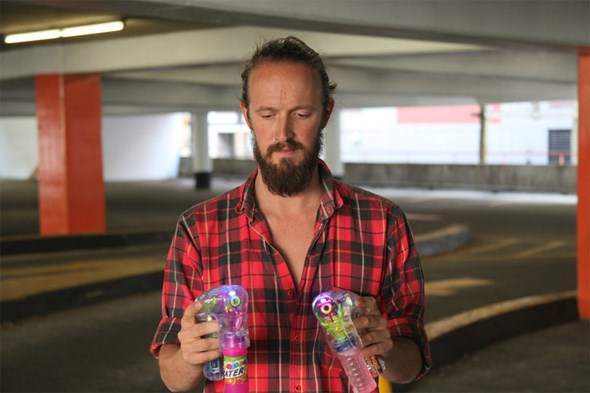 This Summer I was on a road trip with some friends and it was hour four of being in the car together. we were going a bit stir crazy and the radio was broken so we  started singing stupid made up songs. Dan Code is one of the funniest freestyle singers you will ever meet and he was singing crazy ballads about a bunch of ridiculous stuff that I can't really talk about. I also laugh-cried during the sex scene in MacGruber. It's unbelievable.

An ALL YOU CAN EAT Chinese Buffet. Luckily I found one. ManHussy will be doing The REVENGE of TOTAL CHINESE BUFFET there during Olio Festival . It would only be better if it had theater seating with TV trays in front of each seat.

What is the biggest obstacle involved with running a festival?

Finding venues to put the shows in. Vancouver definitely has some nice spots, but most of them don't come cheap. When you are running a festival that doesn't have a huge budget and is focused on a lot of local talent, you have to search out the ones that are a bit more "artist friendly", all the while staying in the parameters of Olio's one neighborhood a day schedule. Plus, not all venues are good for comedy, we had an improv show in a sports bar last year and it was a bit of a nightmare, even with the large crowd that showed up for the show. The last thing a bunch of dudes who showed up to watch NASCAR or UFC want to see is comedy and they will be sure to talk right through the whole show.

What is the process you go through when you create a character?

I've based characters on a lot of different things. Food items, an article of clothing, a song, people I've seen on the street, or just an action I would like to see on stage. I start with one of those things and then go from there. My newest one is based on a character from the Wire.  I'm addicted to that show right now.

Even if it's positive, yelling anything during a live comedy show is not cool. Especially heckling. Heckling is just obnoxious.

You create comedy videos as well as live performances, how are they different when it comes to the execution of the humor?

I think at the beginning it's all the same. You're just trying to write something that's funny. But when you go to film it things can change and you can improvise a lot during different takes. You're also able to do a lot of different things with close ups and special effects in videos that you can't do live, not to mention editing gives you a whole new world of comedic timing to work with.

There is a huge amount of talent in this city all belonging to comedians who are obviously not in the business for the money. You can definitely see some pros in Vancouver, but a lot of people are just doing comedy out of the love of performing and making people laugh. That makes for great comedy.

Reggie Watts, without a doubt. No one does what he does.

What is a comedic premise you think needs to be retired?