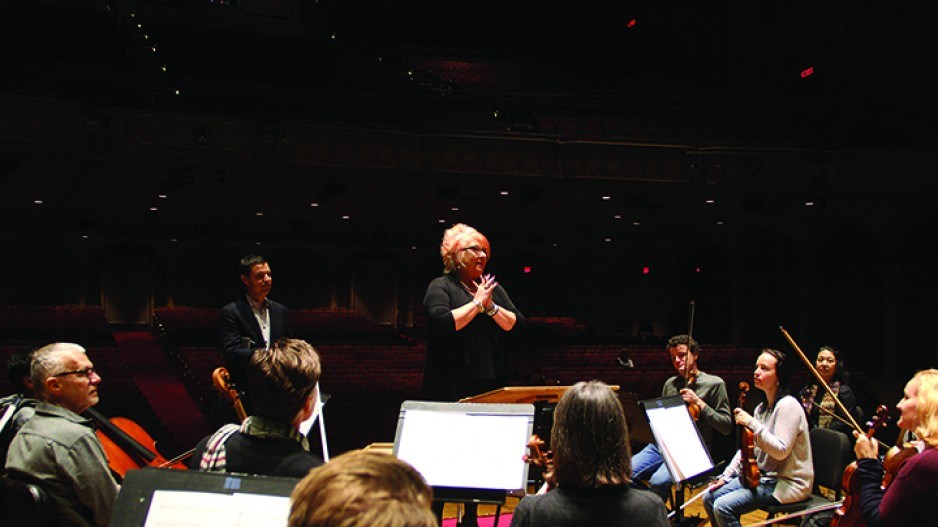 VSO CEO Angela Elster stands on stage with some of her organization’s musicians. Photo submitted

The arts and culture sector is readying for disruption after provincial health officer Dr. Bonnie Henry, on the weekend, said large gatherings are unlikely this summer.

People have long known that events such as the 4-20 protest festival, which would have taken place today, will not be happening. The news now is that festivals such as the July Celebration of Light are not likely to take place, and even the Pacific National Exhibition, in August and September, is on the chopping block.

"Realistically, we will not be having those big events where people gather together this summer," Henry said. "We do not have enough herd immunity or community immunity to allow that type of event to happen."

Arts organizations are reeling, with the COVID-19 pandemic prompting government to outlaw social gatherings larger than 50 people, and advising that even smaller events be cancelled.

The restrictions have forced many event organizers to halt or postpone operations, while leaving no clear timetable for events to resume.

The arts and culture void looming for this summer could have widespread effects beyond the economic damage for festival organizers and others that produce artistic content.

This summer’s lack of programming could take a toll on mental health while weakening the sense of connection that many have with the broader community, according to those involved in the arts.

Arts Umbrella CEO Paul Larocque is concerned that a gaping hole will be shot through his organization’s $8 million budget, and he has a bigger fear that people who rely on his organization won’t be able to cope.

“Arts education provides confidence,” he said. “It gives young people tools to be able to overcome hurdles in life. It gives them courage and conviction.”

Among Larocque’s recent tough decisions was to lay off about 200 instructional staff, and cull his team down to a core of 45 employees. COVID-19 restrictions prompted him to cancel, until at least the end of June, arts education for children and young adults. A small amount of online education is newly being produced.

Among Larocque’s recent tough decisions was to lay off about 200 instructional staff and cull his team down to a core of 45 employees. COVID-19 restrictions prompted him to cancel, until at least the end of June, arts education for children and young adults. A small amount of online education is newly being produced.

Similar stresses are felt at larger arts organizations, such as the Arts Club Theatre Co., which has a $16 million budget, and at the Vancouver Symphony Orchestra (VSO) and the VSO School of Music, which have a combined $14 million budget.

The Arts Club laid off 124 of its 168 employees and put about 500 artists out of work. The VSO, meanwhile, first laid off 22 of 30 staff and 63 musicians, and then was able to rescind the layoffs thanks to the federal government’s wage-subsidy program.

“Audience members are donating their tickets back to the VSO, new supporters are making their first cash donations and our many long-time friends are renewing and increasing their support,” said CEO Angela Elster.

Like Arts Umbrella, the VSO has started to create live-streamed content. Its inaugural stream was on March 15, when the symphony performed Beethoven’s Symphony No. 6 on stage in an empty Orpheum Theatre.

The performance attracted about 50,000 real-time views and a further 50,000 replays, Elster said.

What makes the current situation frustrating for those who head arts organizations is that there is no clarity on when they will be able to return to anything that resembles normal operations.

“This is disastrous to the arts sector,” said Cathie White. “Losses that the Arts Club will face will be very high. Unlike a lot of other theatre companies across Canada, we’re year-round. This has affected seven productions – not just one. It makes a huge difference.”

He maintains that his company will be able to weather the storm, but that it needs support from donors and sponsors more than ever.

Executives with the TD Vancouver International Jazz Festival have cancelled their June extravaganza, as have their Bard on the Beach counterparts.

Vancouver Folk Music Festival organizers have yet to officially cancel their July festivities.

“We’re going to make our decision based on a number of factors, and announce it by the end of April, or early May,” Vancouver Folk Music Festival co-manager Debbi Salmonsen told BIV.

She said her festival, which has a $2 million budget and is set for July 19 through July 21, needs at least two and a half months’ lead time so it would not be practical to announce a decision any later.

Salmonsen also fears for musicians’ well-being. Streaming-music services such as Apple Music and Spotify offer performers a tiny fraction of a cent in royalties – much less than performers used to get when their songs were played on the radio.

“Playing live has become more critical to the survival of musicians at every level, whether you are Lizzo, or Joe Folk Singer getting your start as a 21-year-old in a roots band at coffee houses,” Salmonsen said. “You make your living through live performances – you’re selling your merchandise live.”