“A lot of the book is rooted in self-discipline and willpower and that’s the bait and switch of it: you can manifest the things that you want, but you also have to work for it and hustle.”
Feb 4, 2020 4:20 PM By: John Kurucz 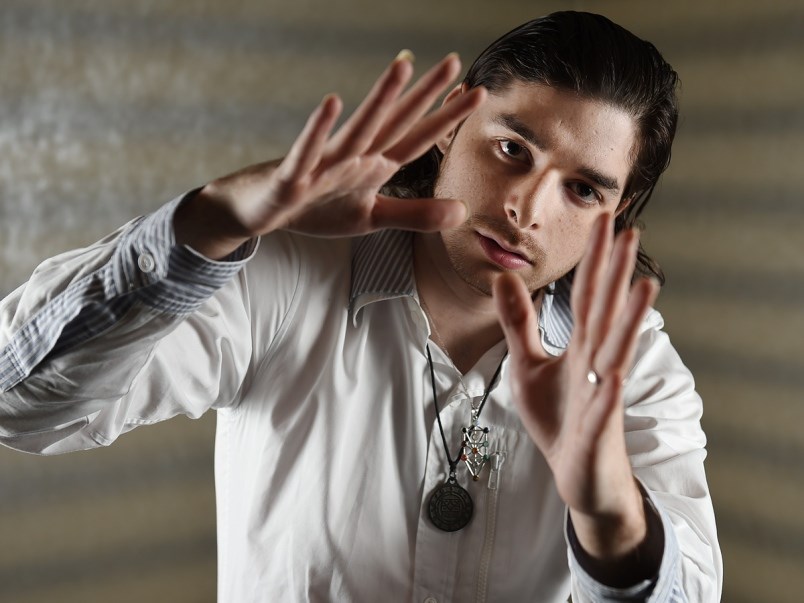 Alex Kazemi’s book Pop Magick — A Simple Guide to Bending Your Reality will be available online and in print on Feb. 18. Photograph By Dan Toulgoet

Alex Kazemi is a new-age dude who relies on old-world teachings in an attempt to enlighten present-day thinkers.

And he’s even written a book about the whole thing.

Pop Magick — A Simple Guide to Bending Your Reality hits stores Feb. 18, in what will be Kazemi’s first foray into book writing, but certainly not his first stroke of the pen.

More on the writing background later but first, the book’s contents and promo photo require some attention.

The Yaletown resident’s promotions team sent over a photo of Kazemi adorned in all white, with angelic wings sprouting from his back. The accompanying press release suggests Pop Magick will help readers “bend reality” in their attempts to “get out of The Simulation.”

The press bumph goes on to say he’s mingled with pop-culture types such as Rose McGowan, Shirley Manson of the band Garbage, Bella Thorne and Marilyn Manson.

Kazemi is on a first-name basis with American Psycho author Bret Easton Ellis, while his debut book has the backing of publishing house giant Simon & Schuster.

Who is this guy and what’s his deal?

“I don’t identify as a Satanist or a devil worshipper or anything like that,” Kazemi told the Courier. “Those are Abrahamic inventions and constructs. I feel more interested in the freedom of the occult and the freedom that it brings people.”

Kazemi portrays himself as a self-help guru who relies on occult teachings to free the young’uns from the trappings of social media obsession and instant gratification. He sees a world full of young people glued to their phones with little desire to strive for anything above and beyond the banality of everyday existence.

This is not a world Kazemi wants to live in and this is what he says his book is all about.

“You’ll get to learn the ancient practices of magick and alchemy in very simplified, how-to guides,” said Kazemi, 25. “I went through hundreds of books about the occult and simplified it into a very practical, understandable language.”

There’s a dividing line between magick and magic that sees the former rely on mysticism and the occult. The latter would be card tricks or other sleight-of-hand techniques.

It becomes clear in talking to Kazemi that he’s dipped his toes into the worlds of self-help guru Anthony Robbins and famed occult figure Aleister Crowley, with a side order of Church of Satan founder Anton LaVey. He has disdain for Christianity and is instead interested in the ancient practice of Kabbalah.

Kazemi is all about manifesting dreams into reality, setting goals and putting in the necessary work to see them through.

Outside of an Instagram account maintained by his management team, Kazemi has no social media presence. He uses a flip phone and hates smartphones.

“I can’t have my mind influenced, I want to be protected from all of that,” Kazemi said. “It’s not even that [social media] is negative — I’m fine with negativity — it’s not constructive, it’s not proactive. It’s always garbage and sends people down negative thought spirals, comparative thinking and cognitive distortions.”

Kazemi’s line of thinking began to change in early adolescence, after surviving a cancer diagnosis at age 12. He’s dealt with obsessive compulsive disorder and substance abuse. He began writing for international culture, music and fashion magazines at the age of 15. It was from there that he forged relationships with Hollywood types, fashion moguls and the in-crowd.

He attained fame early on and hobknobbed with famous people, but the charmed life wasn’t all that and the bag of chips Kazemi thought it might be.

“Usually people who throw themselves into [seeking validation] are doing it from a place of low self-worth and they’re also seeking approval,” Kazemi said. “As I got the things that I wanted and I accrued things in the material world, I felt like it wasn’t actually fulfilling.”

Back to the book, which is a tad more than 200 pages and includes a forward by McGowan. Kazemi touches on topics such as: working with moon phases and candles, alchemy, turning bad things into good things, deprogramming from social media, validation, self-love and the ills of pornography.

All of this, in the name of being your best you.

“Bend reality in accordance with your will and work hard,” Kazemi said. “A lot of the book is rooted in self-discipline and willpower and that’s the bait and switch of it: you can manifest the things that you want, but you also have to work for it and hustle.”

Pop Magick will be available Feb. 18 both online and in book stores.

SCRAP-IT is celebrating a significant milestone in their mission of creating a greener future
May 12, 2021 9:00 AM