As people walked by, Grant would greet them with a friendly comment. I soon saw that his goal was not to get people's money, but rather to get them to smile.
0
Oct 3, 2018 9:39 AM By: Rachel Way 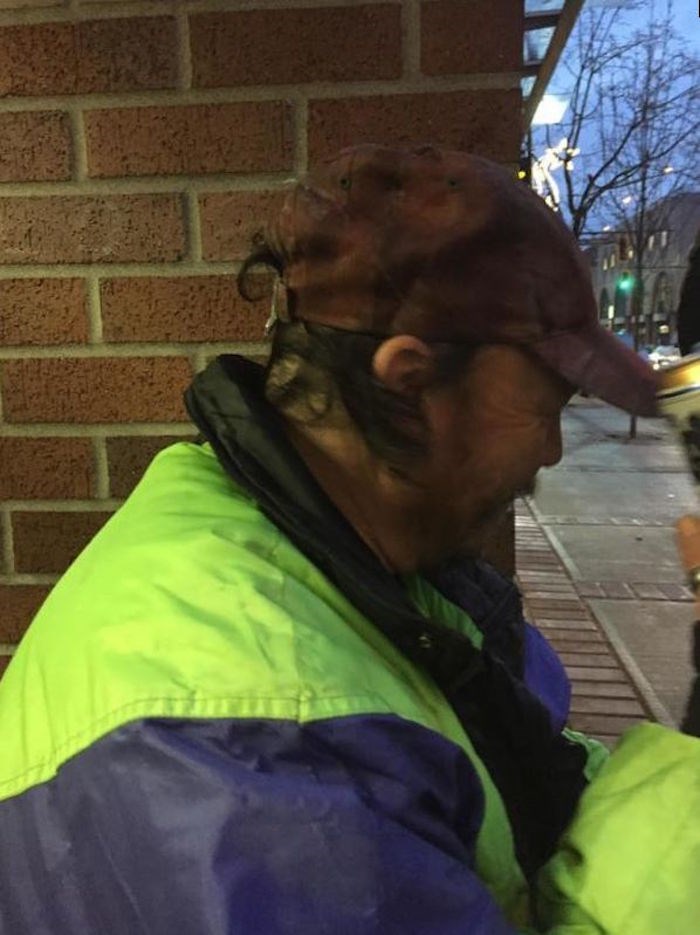 Walking up 6th street in New Westminster on my way to the dollar store I walked past a friendly man sitting in a storefront who kindly wished me a happy New Year. I returned the greeting and continued on my way.

When I got into the dollar store I wandered around a bit, stopped, then bee-lined it for the door. I walked back over to his little spot in the doorway. There he sat with his walker beside him along with a few items in a plastic bag.

"You stalking me?" he jokingly asked. I supposed it looked as if I was, but I laughed then introduced myself. I soon learned that the man who sat in the storefront with his walker in tow was named Grant, and he was one of the most optimistic, friendly, kind, and selfless people I have ever met.

Talking with Grant was much different than talking with most of the other people I had met. He immediately offered me a seat beside him on one of his coats, when I told him I was fine to kneel he insisted that I sat there or he would yell and cause a scene so I quickly obliged. He shuffled over and offered me the seat saying "sit and I will teach you the ways of the streets."

Grant was insightful in saying that I could ask him all the questions I wanted, but if I really wanted to learn about what it was like to be homeless, I would have to sit and be it. So that was exactly what I did, and there was no better way for me to get to know Grant for who he was than to walk in his shoes for just half an hour.

As people walked by, Grant would greet them with a friendly comment whether it be a "happy New Year" or asking "which foot was winning," which seemed to be a personal favourite expression of his. I soon saw that his goal was not to get people's money, but rather to get them to smile.

After sitting with Grant for a while, he turned to me and said "See how kindness and humour pays?"

Grant hadn't received any money yet; he was not referring to the cash he was making, but rather the smiles he was putting on people's faces.

Grant and I got chatting, and as he showed me his techniques and tricks to make people laugh, he explained to me that he makes people stop and have fun with life--that little, tiny things do make someone's day.

I learned that Grant had been living on the streets for as long as I have been alive: 16 years. But a life on the streets had not fazed him or jaded him in the least. He told me that I was a young buck, then corrected himself calling me a "buckette," telling me that I had a lot to learn, that he had been around for a long time. He told me many of the lessons he has learned throughout his life, giving me the crash course of all the life lessons of Grant on 6th street. He shared with me his beliefs in karma, being kind to others, and making the most of life.

What really stuck out to me the most about Grant was his constant optimism. I mean the man told me he was homeless, living on the streets for 16 years, and had a brother die of a drug overdose. But not once, not a single time in all the opportunities he had to, did he sing a tune of "woe is me," but rather one of life is what you make it.

Grant had such a positive outlook on life: "a sense of humour makes the heart true" were words that he lived by. I was so amazed at how he took his situation and turned it into not only something that he could enjoy but also something that made everyone around him's day a little brighter, which I think is a beautiful, beautiful thing. Grant has devoted his entire life to making others happy, to putting smiles on their faces.

When I asked him what a typical day was for him, his response was "this."

Grant was eager to show me some of his tricks to make people's day. He showed me the bell that didn't ring that always got children and their parents giggling. As he was showing me his trick, that, admittedly, I too fell for, a young boy and his mom walked by and Grant called out to him "Why don't you give me a piggy back? Or better yet your mom? She's always working hard, give her a break."

He then turned to me and offered me something to think about: "Give others some strength inside, even a little smile goes a long way." Grant explained to me that these very interactions, the freedom to be able to do this, was his incentive to lead the life he did-for others.

Walking back and introducing myself to the man in the storefront with the walker and plastic bags was one of the better decisions I have made. By introducing myself to him, I learned the importance of kindness, selflessness, positivity and made a new friend--with the person you would least expect.

I encourage everyone to try to meet their Grant, to say hi to someone they wouldn't normally think to. Whether it be someone living on the streets, the person riding the elevator with you or someone in your class. You never know where you can find a friend or someone you can learn something from. Remember kindness and a good sense of humour goes long way.