This May long weekend six hilarious stand up comedians will be raising money for Partners In Health Canada
May 5, 2021 2:46 PM By: Cameron Thomson 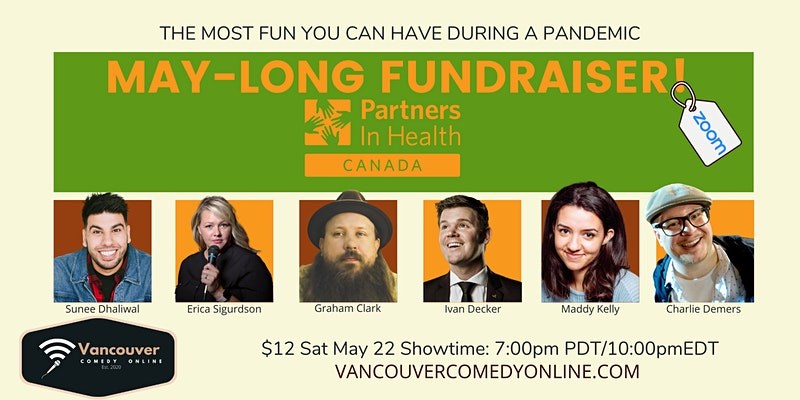 Some of the biggest Canadian comics are putting on a virtual show this May Long Weekend to fundraise for Partners In Health Canada.Charlie Demers

A year of empty comedy clubs combined with a good cause has led to the creation of a virtual comedy show featuring some of the best comics Canada has to offer.

Created by Vancouver's Charlie Demers, a regular on CBC's The Debaters, and star of the Emmy-winning Netflix animated series Beat Bugs and The Last Kids on Earth, the show is billeted as “the most fun you can have during a pandemic.” Scheduled for this May Long Weekend, the show serves as a fundraiser for Partners In Health Canada, an organization dedicated to global vaccine equity which is especially focused now on distributing the coronavirus (COVID-19) vaccine to low and middle-income countries.

Demers has been following the work of Partners In Health for the last 15 years and says the partnership seemed like a natural fit for the organization and the half dozen comics unable to perform during the pandemic.

"It's sort of a dream lineup and I think it's a combination of an amazing cause and an especially idle time for a lot of the funniest people in the country. I mean, this has been such a weird year for everyone in every industry but in comedy, it's been so strange,” Demers said.

“People have needed to laugh and yet have also felt like not quite right about laughing or not quite ready to laugh and then there's also the fact that comedy really happens when people can gather and for huge parts of the last year obviously we haven't been able to do that."

The star-studded comic lineup includes names like Vancouver local Graham Clark, Erica Sigurdson, Sunee Dhaliwal and Ivan Decker. For a full list of the comics and their bios check out the show’s Eventbrite page.

The show runs from 7 p.m. to 8:30 p.m. with each comic receiving about 10 minutes to deliver their material.