Graham Clark, left, and Dave Shumka are poised to release the 500th episode of the award-winning Stop Podcasting Yourself. Dan Toulgoet photo Nine years is a long time in podcasting.
0
Oct 12, 2017 4:52 PM By: Glacier Media 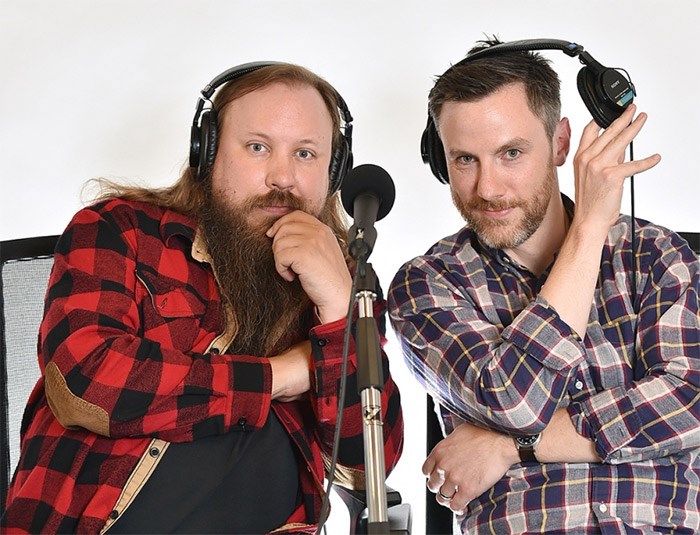 Graham Clark, left, and Dave Shumka are poised to release the 500th episode of the award-winning Stop Podcasting Yourself. Dan Toulgoet photo

Nine years is a long time in podcasting.

“When we started, wasn’t Netflix still mailing you DVDs and stuff?” marvels Graham Clark, sitting beside fellow comedian Dave Shumka. “Now the idea of that seems like something out of The Flintstones.”

But 2008 was the year that modern Stone-Age families were tuning into – or, more precisely, downloading – the first episode of Stop Podcasting Yourself, Clark and Shumka’s popular weekly show that is about to release its 500th episode.

“Obama was elected in 2008. And he’s, like, the current president,” adds Shumka, deadpan.

“And he’s doing great. He’s the president that everyone adores,” Clark rounds off.

It’s a typical snippet of dialogue from this pair, who riff on themes upon themes in their award-winning podcast and, evidently, carry it into day-to-day life outside of Shumka’s home studio; even when meeting journalists at Fraserhood cafés.

It’s a natural chemistry that Clark and Shumka developed independently by starting improv in their teens (especially through the continuity technique of “Yes, and…” Shumka explains. “You don’t want to slam on the brakes") and cemented when they met on Vancouver’s standup circuit and found they could easily make each other laugh.

“There’s an inclination in comedy that if you get along with somebody that you find funny, and if they think you’re funny, that you should collaborate on something,” explains Clark, he of the infectious chuckle, long hair and beard, the latter of which he uses to paint pictures for charity (see beardpaintings.com).

Finding standup to be a less than collaborative pursuit, they began writing comedy sketches and soon realized there was potential in the process.

“We thought, why don’t we record this, have friends over,” says Shumka, sporting trim hair, glasses, sharp wit and a latte. “I quickly realized this is the way I’m funniest. It felt really natural after the first few episodes.

“This was before podcasts had a theme. Like, we’re gonna talk about movies or review restaurants or whatever.” 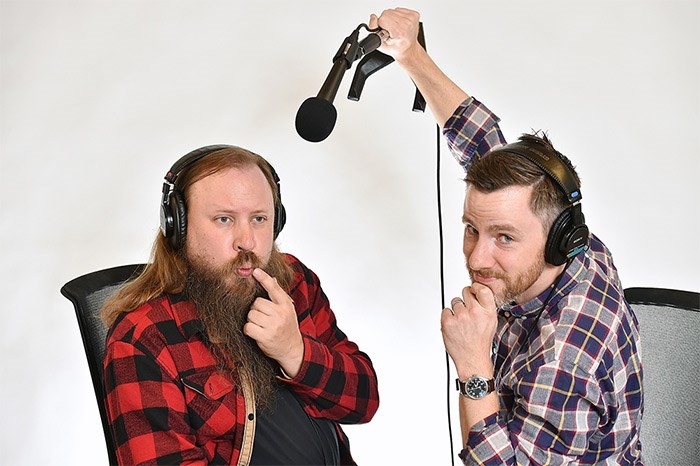 “Our show is just us talking for 90 minutes trying to make each other laugh. Before podcasting, there was no format for that,” says Dave Shumka, right. Dan Toulgoet photo

But the lack of theme beyond “two dudes talking” has served them well over 499 episodes, leading to three Canadian Comedy Awards.

Each of their 90-minute episodes is freeform comedy built loosely around two regular segments – “Get To Know Us” and "Overheard” – and questions bounced off special guests, which in the past have included fellow comedians such as Brent Butt (Corner Gas), Paul F. Tompkins (BoJack Horseman) and Nikki Glaser (The Standups).

Recent topics of discussion have included New Kids on the Block, weird smells, underwear pouches, aliens vs. dinosaurs, drinking soap, small-town gay bars and mustard; the last appearing to be something of a recurring love of Shumka’s.

“Our show is just us talking for 90 minutes trying to make each other laugh. Before podcasting, there was no format for that,” Shumka says.

Clark and Shumka’s decision to stick with the podcasting medium could be a shrewd one. Stop Podcasting Yourself doesn’t yet pay the bills – though the show makes some money from advertisers and its hosting platform, maximumfun.org, as well as the duo’s short tours – but that could change as podcasting’s popularity continues to grow.

There are no dedicated figures for Canada, but a recent study by Edison Research in the U.S. shows that almost a quarter of Americans listen to a podcast on a monthly basis, up from nine per cent in 2008. Around 15 per cent of Americans listen to a podcast weekly, the study says, a proportion that’s more than doubled since 2013 – and those weekly listeners consume an average of five podcasts a week.

Another indicator of the medium’s rapid growth is in figures from Libsyn, the leading podcast hosting network, which recorded 4.6 billion download requests in 2016, almost triple the number from 2012.

That said, the medium is still niche in overall listening habits. Edison’s Share of Ear study for 2016 found podcasts only take up two per cent of Americans’ listening time, with radio still dominant at 54 per cent.

The real gamechanger that could see podcasting go mainstream will be easier access to the medium, Clark says.

“Jessie Thorn, the head of Maximum Fun, he pointed to the fact that it will accelerate in growth once it’s as easy as turning on a radio. Right now, you have to have an app or download an app or connect to something. There’s one step beyond just turning it on and it’s there. And if that happens, you’ll just see it go bananas, I imagine.”

Edison’s research shows potential movement in this direction, with an uptick in ownership of the Amazon Alexa and Google Home voice-activated smarthome devices. 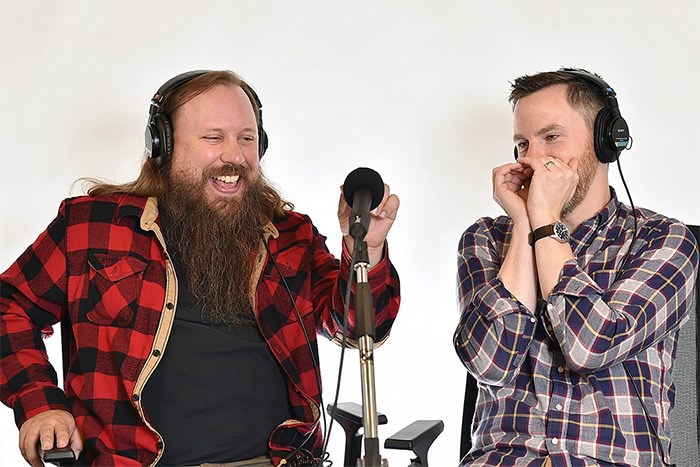 Graham Clark, left: “I bet there’s a Def Leppard podcast.” Dave Shumka: “I think I actually know for a fact there is.” (There is.) Dan Toulgoet photo

In the meantime, podcasting will remain a universe of niches.

“It’s not like podcasting is generally a niche, but every podcast is a niche,” Shumka says. “You’re wearing headphones, you’ve no idea what the person next to you is listening to. It’s not like you can all talk about the TV show that was on last night that you all watched at the same time.”

“There really is something for every interest if you were so inclined,’ Clark adds, citing history and true crime podcasts he’s been listening to, as well as recalling the regular Breaking Bad episode breakdowns by one of the popular AMC show’s editors. “There’s a podcast waiting for you.”

“Not like we’re advocates for the industry,” Shumka chimes in. “What do we care? Listen to ours!”

“I think I actually know for a fact there is.”

(Westender can confirm that there is, indeed, a Def Leppard podcast titled Till Def Do Us Ppardy, with 28 “Leppisodes,” available on iTunes.)

As for Stop Podcasting Yourself No. 500, Clark and Shumka want to make clear that it’s a slightly unusual episode featuring, among some reflective moments, the podcast’s first-ever song.

“I’m worried people will listen to Episode 500 and think, what the hell is this?” Shumka says with a laugh.

“If you’re interested, listen around the 500th episode,” Clark advises.

“Or pick a name you recognize from our guests.”

“Or pick a favourite number.”

• Stop Podcasting Yourself No. 500 will be published Monday, Oct. 16 at maximumfun.org

Read more from The Westender