No need to fret, Vancouver guitar festival is back and bigger than ever

Running Aug. 11 and 12, the second iteration of the festival can be summed up by one word — more. More luthiers, more space, more demonstrations, more masterclasses, more guitars.
0
Aug 7, 2018 4:00 PM By: John Kurucz

Meredith Coloma couldn’t care less about hockey, but she’s got a lot in common with the Vegas Golden Knights.

Coloma is co-founder of the Vancouver International Guitar Festival and the parallels between puck pursuits and six strings are uncanny. 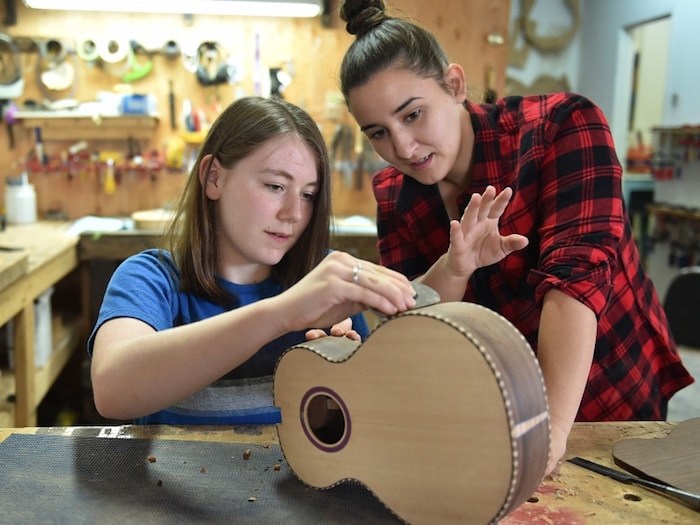 Both the festival and hockey team accomplished first-year success that few could’ve predicted. Neither had a reference point to guide them, both laid roots in untapped markets.

The jury’s out on whether the Knights can return to the Stanley Cup final, but the guitar festival is undeniably winning in its second year.

“It went from being talked about locally, to across Canada, to being an international story,” said Coloma, who’s recognized globally as one of the most successful young luthiers. “These were baby steps that we were trying to take, saying to ourselves, ‘I hope this goes well.’ And now there is that interest.”

Running Aug. 11 and 12, the second iteration of the festival can be summed up by one word — more. More luthiers, more space, more demonstrations, more masterclasses, more guitars.

For starters, the venue is bigger. What was held in the Chinese Cultural Centre last year will be housed in the Creekside Community Centre in Olympic Village. While 2017 saw the inclusion of luthiers predominantly from Canada and the U.S., the upcoming shred fest features guitar builders and players from across Europe, Asia and North America.

Rock stars of the luthier world who’ll be in Vancouver include Ervin Somogyi, whose guitars command upwards of $30,000 a pop; James Trussart, the builder behind axes used by Bob Dylan, Keith Richards and Eric Clapton; and Vancouverite Michael Dunn, one of Canada’s longest-standing guitar makers.

It’s Dunn’s 50-plus year career in particular that gets the red carpet treatment this weekend. One of Canada’s first and best-known luthiers, Dunn will receive the Luthier Industry Builder Award, which is the equivalent of a Lifetime Achievement Award at the Grammys.

Now semi-retired, Dunn has built 660 guitars over his 53-year career. He mentored about 120 people in the ways of the wood while teaching luthiery over an eight-year span at Douglas College.

Speaking from his East Vancouver home and shop, Dunn would rather wax on about modes and scales than personal accolades.

“I haven’t really thought about that, but I guess I’m going to be called upon to say something,” he quipped. “This is really nice to get an award like this. I’m kind of humbled by it. But I just like building guitars.”

Dunn broke into the guitar game in the mid-1960s while working in a West Side shop. At first, he was your basic guitar setup guy: change the strings, adjust the alignment, make sure the thing plays in tune.

The shop owner led Dunn into a room with dozens of guitars that needed love, and at the age of just 22, Dunn knew why he was put on Earth.

“The minute I walked into that room with 35 guitars to fix, I knew that was what I wanted to do with my life,” he recalled. “There was no doubt. I crossed a threshold and said ‘I’m going to be a guitar maker.’”

A three-year apprenticeship in Spain followed, where Dunn learned under third-generation luthiers. He came back to Vancouver in 1970 and was a big fish in a small pond, given there were only six to 10 luthiers in B.C. at that time.

Now there’s somewhere in the neighbourhood of 120, all of whom have the benefit of instructional books, YouTube tutorials and a generation’s worth of knowledge to soak in.

“It would be much more difficult today for a luthier starting out, simply because of the scarcity of luthiers when I started,” said Dunn, 75. “By comparison, we would have been considered an endangered species back then. Now, everybody has a brother and the family dog who is building a guitar.”

Dunn estimates the build process takes somewhere between 100 and 200 hours, though he’s never made a point to count. He prefers hand tools over power tools, and lists introspection, playing and patience as the holy trinity of luthiery.

“You can either learn patience, or bash your head against the wall. Learning to be patient is easier,” Dunn said. “And the better you can play the guitar, the more accurately you’ll be able to self-assess your work.”

The words “guitar” and “work” have been two peas in a pod for Dave Martone’s entire adult life. A professional musician for going on 25 years, Martone has played alongside masters who have reached the pinnacle of guitar playing: Steve Vai, Joe Satriani, Yngwie Malmsteen and Paul Gilbert.

Martone’s Aug. 11 masterclass “The Combined Hands of Fury” will speak to his versatility across every conceivable genre of music, including flamenco, classical, rock and heavy metal. He’ll inevitably touch on technique and tone, though Martone’s ace in the hole can’t be learned in a book or video.

“It comes down to one word — confidence,” he said. “Have confidence in yourself and what you do. Have the confidence so that you can step on the stage and remember that you’ve practiced it and you can own it.”

Those pearls of wisdom came from Vai, widely considered one of the greatest guitar players ever. The pair were playing a workshop together in California 17 years ago when Martone asked the elder statesman for career advice.

Those words stuck and are applicable in a context much larger than fretboards and pickups.

“I’m not saving someone’s life. This isn’t brain surgery or heart surgery — I’m playing music,” Martone said. “If I miss one note in a scale, who cares? It doesn’t matter. Relax, be confident and don’t take it too seriously. Music is supposed to be fun.”

Tickets for the Vancouver International Music Festival are available online.