Many times a day, the people you see crossing the street or meet in your travels make you smile and wonder, “What is their life like? What is their story?” A photographer is compelled to capture these individuals’ image to communicate their unique st
0
Aug 21, 2014 6:02 PM By: Tallulah

Portraits from the Vancouver People Project will be featured in Vancouver Is Awesome as a precursor to a future photographic exhibit featuring the wonderful characters who contribute to the fabric of Vancouver.   Tallulah can be reached at tallulahphotography@gmail.com 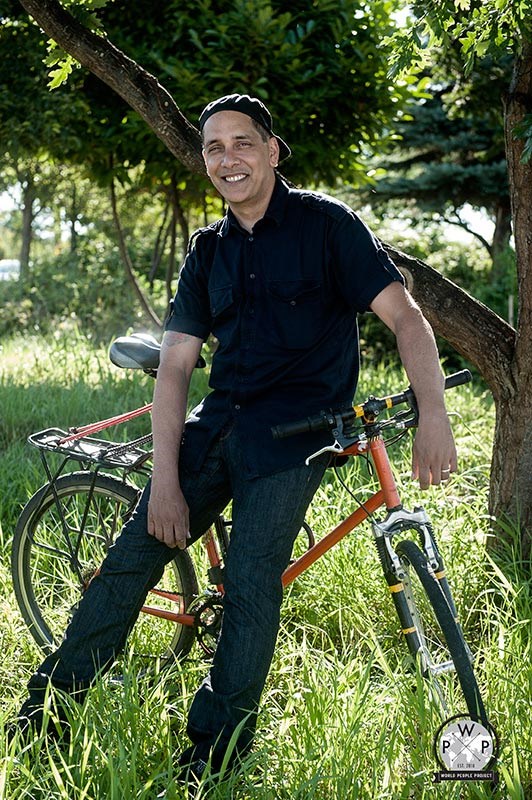 How long have you lived in Vancouver? I arrived as an infant, so pretty much my whole life.

Occupations: I’ve had a few interesting occupations over the years. At age 18 I was the first straight waiter at the inimitable 24-hour Davie Street eatery Doll & Penny’s Cafe, working the 1-7 a.m. shift. I also slung drinks at the legendary music club Graceland, worked a variety of construction jobs, painted movie sets and worked in a foundry. I also did a few acting gigs on a Hong Kong kung fu movie, as a ‘ranch kid’ on Neon Rider and dancing on the Capilano Suspension Bridge with a tray full of sodas for a Sprite commercial. But first and foremost, I’ve always been self-employed in some capacity. At various junctures I’ve had businesses in publishing, retailing leather biker jackets and a photocopy and print shop. I’ve been making and selling graphics throughout my teens, and since 1992 I’ve been providing design services as ‘Pete Digiboy.’ When I started doing graphic design in the late 1980s, we were still using rubylith and letraset and film; I was lucky to be at the forefront of the emergence of personal computers.

Passions and Interests: I appreciate visual narratives, so comic books, fine art, photography, architecture and design, cities and exotic travel locations. Cities are especially interesting for me, particularly the heritage of cities — so many stories in their well-worn patinas. I’m also passionate about community, which is why I’m now standing up for the citizens and neighbourhoods largely forgotten in the new narrative of Vancouver. As a kid, it was really drilled into me how lucky we were to be in Canada and that we had an obligation to give back. I’ve always done a lot of volunteer work, most recently as Chair of the Strathcona Residents’ Association and a member of the Downtown Eastside Local Area Planning Process. Both were tough jobs and a lot of work, but I’ve learned that if you want something to happen, you need to roll up your sleeves and get it done. I saw that with my mom Dr. Hedy Fry (MP, Vancouver Centre). She came into politics as a neophyte in 1993 with the goal of establishing equal rights for same sex couples. She worked hard and helped make that happen. Recently a colleague from Colorado mentioned that her same sex marriage in that state was possible in part to the work my mom did 20 years ago.

What do people know you for? Locals know me as ‘the mayor of Strathcona,’ clients know me as Pete Digiboy, friends know me as a stand-up guy and soon, hopefully, everyone will know me as a Green Vancouver City Council member.

Thoughts on Vancouver? Vancouver is my home; it’s the only one I've ever known. The sum total of my life experiences, my relationships and my dreams have been shaped by this city. I care deeply for Vancouver and the people who live here; that’s why I’m running for city council with the Green Party of Vancouver. I love the weather, I'm one of those weirdo true-blue Vancouverites that doesn’t own an umbrella. I also love the fact that almost everybody here is from somewhere else. I’ve appreciated watching the city grow into the multicultural mélange that it is today. At the same time, that influx of people from across the country and around the world has helped precipitate a boomtown mentality fed by real estate speculation, and I fear the result will cost the city its soul. It’s not sustainable. The thing I dislike the most about Vancouver is seeing my friends get squeezed out because the city is too unaffordable. I hear pundits applaud Vancouver's development trajectory toward the shiny forests of glass towers and modern architecture — because Vancouver is such a young city and never had any real heritage worth protecting in the first place. To me, nothing could be further from the truth. We have such a unique place in history: from the early overlapping territories of the Musqueam, Tslei-Waututh and Squamish peoples, to the growth of the railroad and opening up as a gateway to the Pacific, to the gritty neon-lit logging town on the edge of the rainforest. This cultural mash-up and heritage is evident in our past and present.

I have known Pete for quite a while. I am always in admiration of my fellow citizens who devote their personal time to work for our communities. It is interesting to see him follow in the footsteps of his mother, Dr. Hedy Fry, into the political arena. I photographed Pete with his bike in his beloved Strathcona neighbourhood.