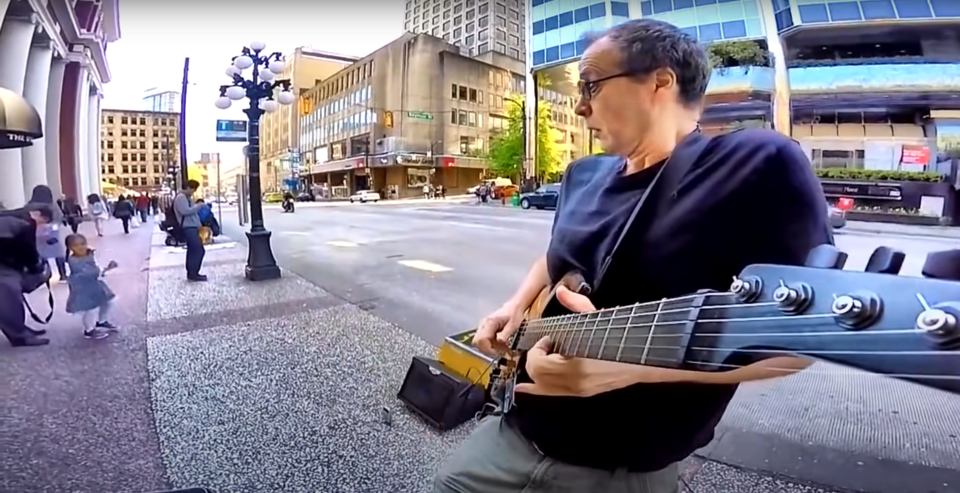 While Robin Spanell performed at his usual busking spot at Waterfront Station he was treated to the dance moves of an adorable little girl enjoying his music. Robin Spanell

A little girl was waiting to board a bus when a nearby busker with an electric guitar began to play ZZ Top’s "La Grange" and she just couldn’t keep from dancing.

The bus stop where this impromptu, one-person dance party took place was just outside Waterfront Station in Vancouver in 2019. Due to the coronavirus (COVID-19) pandemic, professional musician and YouTuber Robin Spanell, the man creating those blistering guitar solos in the video, lost any and all live music gigs he had. The last time he played at the station was in September 2019 but he was unable to return as busking was banned in March.

Her stomping and spinning dance style did not go unnoticed by Spanell who looks over at her several times as he is performing.

“I don't often see this, but when it happens it's always 99%  kids that are doing it,” Spanell wrote in the video’s description. “Before they become jaded (age 8), they still have that spontaneous spark, that reaction to music that we all used to have. Emotion is no.1 priority and they express it without shame.”

Spanell went on to write that he is sure one day that little girl will love seeing herself dancing so freely to his music. He also pointed out an incredibly appropriate coincidence that on the same ZZ Top album as "La Grange" is a song called "Waitin' for the Bus."

Spanell says his YouTube channel nets him no income, writing that he doesn’t place ads on his videos for the added enjoyment of his viewers. He does say though that if you enjoy his videos and his music you should check out his Bandcamp page and think about supporting him on Patreon and PayPal.

One of the tiers on Spanell’s PayPal he offers to help other musicians with their improvising skills, their tone and getting into the zone.