ReVIEWS, preVIEWS, interVIEWS, and overVIEWS: here's where you'll find out what the Vancouver Book Club team thinks about the literary scene in Vancouver. What you should read, where you should go, who you should sit up and notice.
0
Sep 18, 2012 2:54 PM By: Liisa Hannus

Ever since the first time I read Nick Hornby's High Fidelity I've been interested in men writing about the male experience. It's the insight into the male psyche that fascinates me. There is a pervasive attitude that men, especially rural men, must be strong at all times. Weakness is, well, a weakness. Don't cry. Don't complain. Life not fair? Suck it up. Be a man.

This is the environment of the men we find in Bull Head (Arsenal Pulp Press), John Vigna's debut story collection. They're country men, small-town denizens. Loggers, truckers, farmers. Men trying to find their place in their world, trying to make their own stories fit in with what is around them. They're both tough and vulnerable, emotionally raw and at times hair-trigger explosive. Mostly they're just trying to make sense of their lives.

This collection of eight stories has been long-coming for Vigna.

"My agent had tried to find a home for this manuscript first in 2008. The stories were in a different form then and we had a lot of interest and a lot of close calls from major publishers. They'd send these beautiful rejection letters that I'd start to think 'They're going to take this,' but in the end they would say 'This just isn't right for our list' or something like that." 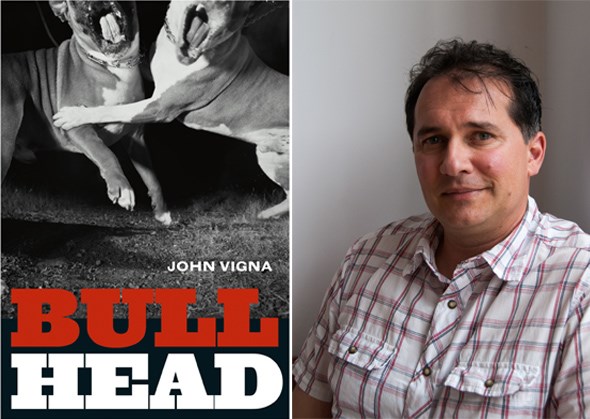 He did get some helpful feedback from a few editors who said that the violent nature of the stories meant they had trouble identifying with the characters or having any kind of empathy or sympathy toward them.

"The feedback was really quite general but it sort of nailed the things that I had concerns about when I was sending it around," explains Vigna. "I had concerns about (the violence) and they picked that up. And so I worked on it for a couple more years. I'm not terribly fast. The collection changed remarkably. I wrote some new stories and some that were in that original collection got taken out and new ones put in."

Violence is still present in the stories, but rather than being front and center it lurks in the shadows, waiting to deliver a sucker punch. Guns, of course, come into play, as do hands, trucks, and words. Sharp, biting words that do more damage in the long run.

Each story seems to act as a different element of one big story, different points of view of the same microcosm of society.They are populated by people feeling the rawness of isolation, physical but mostly emotional. Widowers looking to find a way to fill that hole that can never be filled. Young men trying to figure out what the world expects of them and how thay can achieve it.

In "Pit Bulls," we meet Brian, a young man struggling daily with the choices he has made and seeing no way out. He helplessly watches his son being raised by another man, wishing things were different while at the same time barely able to keep his own life together. He lives in his car. He breeds and trains fighting dogs, hoping to make a big score. His actions make  him hard to like, but for Vigna Brian is an important character.

"I love Brian," he admits, "and I've known people of his ilk in my limited time in smaller communities. I think it was important to give a voice to people like him that make bad decisions or are stuck in terrible situations and whenever they make a choice they make it worse for themselves and you just want to shake them and say 'Come on! Get a grip!' The reality is that they have a real difficulty with this. I know, he makes some terrible decisions and gets himself into quite a pickle, but he's definitely one of my favourite characters and has been right from the beginning."

In "Short Haul" it is not so much when the violence comes but who instigates it that is the most jarring. Lonnie is a trucker stuck in an unhappy marriage compounded with domestic abuse. In Lonnie's case, though, he is the victim. "I hate myself for what you've turned me into," his wife Dani sobs after she has delivered a beating while he was sleeping, complete with kicks to his ribs and head. She berates him for not fighting back, but Lonnie has almost given up on finding an alternative to this relationship. He seems at a loss as to how to get out of it and his attempts fail as quietly as Lonnie's personality.

One story that stands out from the rest is "Cut Block" in that the protagonist is a woman, the lone one in this collection of male-dominated points of view. While the other stories have female characters, they are secondary to the thoughts and motivations of their male leads. In "Cut Block" the reverse is true. We follow the story of an unnamed woman, a tree planter, who begins a relationship with a young man, a relationship that falters once they are no longer within the intense and insular environment of the camps. For the reader there is a sense of distance, as if we're viewing her story from far outside the events.

Vigna says that he was reluctant to have the story from the woman's point of view. "I didn't want to be saying that this is what it's like for a woman," he explains. "I just wanted to give a different angle as to what was going on with these men's stories."

Calgary-born and now living in Richmond, Vigna has spent many many years living and working in communities similar to those of his characters, including almost a decade as a tree panter.

"I've always had that sort of warmth or interest in how people make their lives work, when they're tied together with the resources. The challenges that go on for people of all demographics in small areas is tremendous, just like it is in the city, but there are other factors in play. So I have a real keen interest in how people make it all work and how they relate to the world. I think that's where it comes from. My time living in those areas has been really moving. There are just so many different people trying to make a go."

It is somewhat fitting that John Vigna's story collection eventually found a home with local publisher Arsenal Pulp Press. The way he describes the people at Arsenal he could be talking about the characters in his book.

"They undertood what was going on with the intention of it. They're great people, very enthusiastic. They're fantastic. They're small but they work so hard and I think it's great that there are publishers like this in Canada."

Bull Head has its launch tomorrow night (Wednesday Sept. 19), 7:30 pm at The Bourbon. Beer, books, bourbon, and a mechanical bull. What better way to introduce us to these people and their stories.