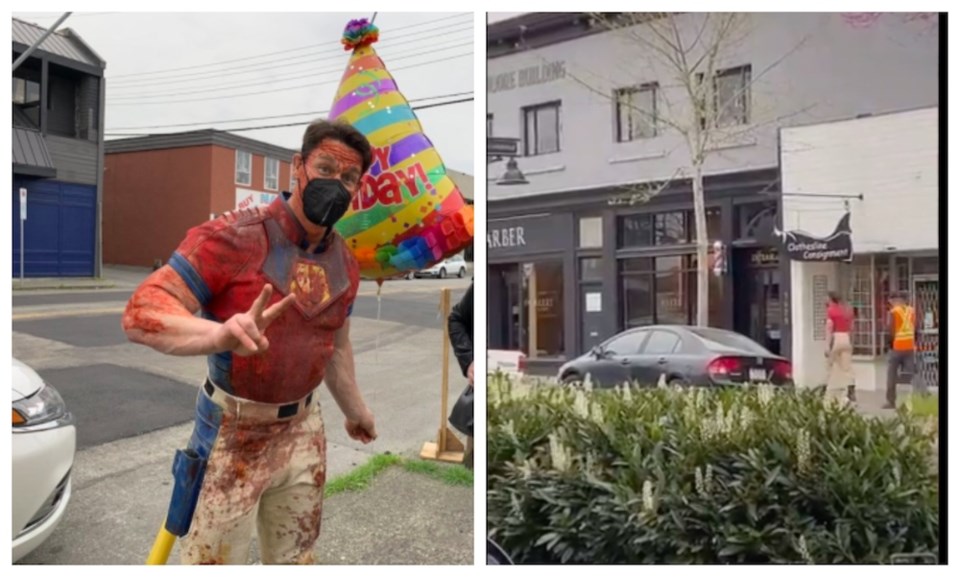 Actor John Cena was filmed in costume as he walked down a Metro Vancouver street in April 2021. He is filming Peacemaker--a Suicide Squad spin-off show.Photo via Photo via @IamStarrider / Twitter

A video has surfaced on social media that shows popular actor John Cena in costume walking down a Metro Vancouver street.

Recently, Director James Gunn took to social media to share a picture of the actor walking down the street. He captioned: "What’s weird is that this is on John’s day off."

In response, a fan has shared a short video of the Peacemaker star walking down the street. In her Twitter post, she writes that he was "covered in fake blood" although it might be difficult to spot in the video. However, she assures that there "is lots of blood."

I love that he shares this one when John Cena was also walking down the street covered in fake blood. 😂

(It’s difficult to see in this video, but I assure you that there is lots of blood.) https://t.co/FOqseR6u8P pic.twitter.com/NGE7w0aaJ6

Fans also shared photos of John Cena celebrating his birthday on a Vancouver film set a couple of weeks ago.

Gunn also wished Cena a happy birthday on Twitter and said that the actor loves empanadas. In response, Cena stated that he wishes his Peacemaker costume had an "empanada poop chute."

'What a joke': Vancouverites react to American actors filming in the city in the wake of soaring COVID-19 cases
Apr 27, 2021 5:18 PM
Comments